The ‘Christian Jew’ Who Told the Truth About the Holocaust 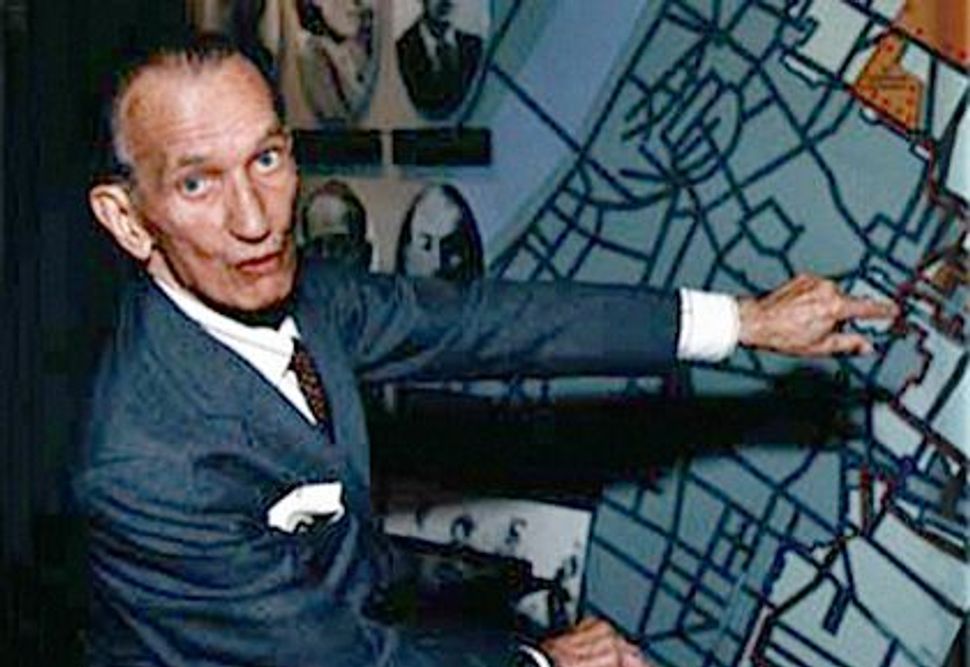 Fiction has a long history of trying to negotiate its way into and around atrocity. So, we sometimes forget, does fact.

Knowing that something unbelievable is true does not make us more able to believe it, just as knowing it is fiction does not make it seem less real. This unsolvable yet ever relevant conundrum was underlined last weekend by Arthur Nauzyciel’s site specific staging of Yannick Haenel’s “Jan Karski (My Name is a Fiction),” presented by the French Institute Alliance Française as part of it’s Crossing the Line 2011 festival.

The reading, based on Nauzyciel’s earlier staging of Haenel’s book (released here as “The Messenger”), concerned the life of Jan Karski. A Polish Catholic, Karski was charged by that country’s Underground during World War II to carry news of the massacre of Poland’s Jews to the governments of England and the United States in order to convince Allied leaders to act in their defense.

In the company of Jewish leaders, Karski twice toured the Warsaw ghetto, to memorize it (“we know nothing without first having seen it,” he says) and later visited the Izbica Lubelska “sorting camp” in the disguise of a camp guard. Describing what he saw in Poland, Karski worried that such things would never be believed: “They will think that I exaggerate or invent,” he writes. Karski’s tragedy was that this proved to be the case: As one U.S. Supreme Court Justice he spoke to put it, “I did not say that he was lying, I said that I could not believe him. There is a difference.” Just what this difference is, in the tension between fact and fiction — the unbelievable testimony, the message forced into the domain of the fictional — is what Haenel’s novel, and in turn Nauzyciel’s play, sets out to explore. One is reminded of Paul Celan’s lines “No one / bears witness for the / witness” — and also of that disconcerting party game, “Two Truths and a Lie.”

The reading was held at the Payne Whitney House on Museum Mile, the Gilded Age mansion that is home to the Cultural Services of the French Embassy. The audience sat on the second floor landing facing the grand whoosh of a staircase. Submerged in luminous marble and flanked by mirrored doors, the disjunction between the subject of the reading and the location was vast. As such ruptures tend to do, it had the effect of shaking you to attention. Nauzyciel’s direction provided little to see: Actors read from up and down the staircase; a video (a muted, constructivist close-up map of the Warsaw Ghetto by Polish sculptor Miroslaw Balka) played on a television monitor to one side. It was austere, simple, and focused; there was the impression of a voice, and not much more.

Watching the play (or reading), we were mostly listening. Do we believe what we hear? Haenel has Karski say that world history is the history of human souls. The souls of the victims, the executioners, and those who were just there (as we as an audience were there) — the last being the ones who pretend nothing happened. We believe some things, but by announcing others as fiction the play doesn’t allow us to take belief for granted. In another tease, Karski’s very name is a fiction. He was born Jan Kozielewski; “Karski” was a nom de guerre.

Following the structure of Haenel’s book, the reading was in three parts. It began with a description of Karski’s testimony in Claude Landzmann’s film “Shoah,” read, in heavily accented English, by Nauzyciel himself. Nauzyciel describes another man trying to speak, not being able to speak, and turning away from the camera. This was followed by a section based on Karski’s autobiography, “Story of a Secret State.” The actor, Daniel Pettrow, would occasionally pause, as though having difficulty reading, stumble over a word, or threaten to stop altogether. As he recounted Karski’s meeting with President Franklin Roosevelt, an unexpected crescendo of recorded music drowned out his words. As an audience member, you listen, but can’t hear, you know, but can’t know, you are reminded that, too often, not hearing is the same as not wanting to hear, and that even your own not hearing may be you not wanting to believe.

The third section, read by actor James Waterston, was fictional. Entering into Karski’s mind, it imagines his inner life as the bearer of a message and as what he called a “Christian Jew” wracked by guilt and frustration. Waterston, reading carefully and solemnly, gave a sense of Karski’s own intractable nobility, his gentle, yet fierce dedication and the extreme loneliness of living with an undeliverable message. This third section is full of names and lists given conscientious recital. We were left to wonder whether knowing that these are not really Karski’s own words makes them any less true in the end. Maybe we would rather know the fiction.

The third section also makes the point that Karski became his own message after the destruction of the ghetto essentially emptied it of content. He came to embody the very truth no one would believe. The audience was moved into an adjacent ballroom, where we sat on the floor behind a row of candles while a dancer, Alexandra Gilbert — dressed in hot pants spangled with gold stars — performed a piece by choreographer Damien Jalet. As evocative as the text, and an appropriate closing parenthesis, Gilbert’s movements gave physical shape to Karski’s story. At times it was a dance of seduction — luring the audience in — at times a reenactment of torture. Gilbert’s body, jerkily bent and tensed into the somehow exquisite contortions of a body in pain, was given a heightened sensuousness, a stark physicality that made what had only been heard before feel like something witnessed at last.

Although it shied from answering any of its own questions, Nauzyciel’s “Jan Karski” achieved that rare feat of both disturbing and igniting the intellect. Taking care to be accurately heard, Nauzyciel relayed the message inside Karski’s message, that of the easily missed difference between knowing and believing, fiction and fact, and, perhaps most crucially, what becomes of a truth when no one chooses to believe in it.

The ‘Christian Jew’ Who Told the Truth About the Holocaust