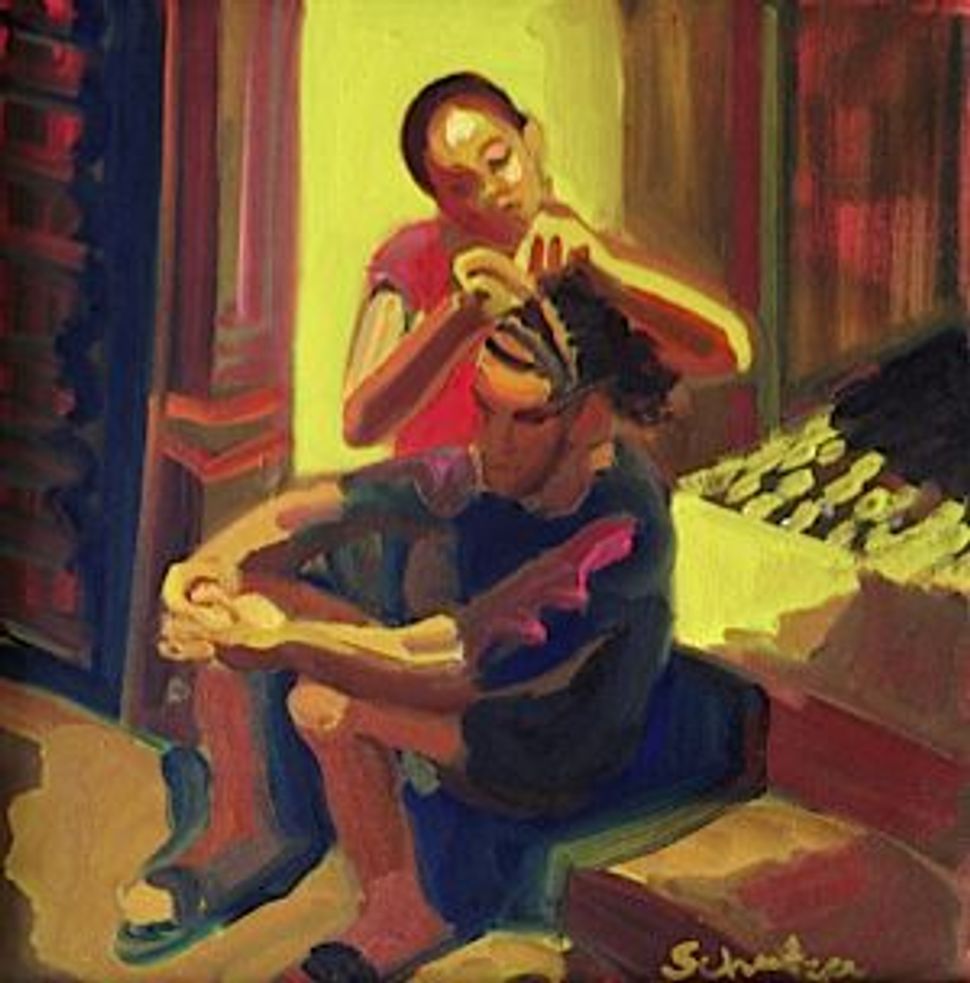 Schutzer, who chairs the art department at the Abraham Joshua Heschel High School, has illustrated several children’s books, and it is easy to see how her keen eye for movement would translate into illustration. Her paintings are alive with squirming color and form. Unlike her children’s drawings, these paintings have a harshness of a particularly New York kind. The drawings are somewhat more hospitable, though less evocative of the way this city’s small dramas carry a weight all their own.

Using thick slabs of color and favoring a palate heavy with blues, yellows, blacks and browns, Schutzer is especially adept at conjuring the city’s unrelenting light. Objects are separated into their constituent shades, precipitating an exaggerated conundrum of color that gives the impression of being viewed through a rain-covered window pane.

Schutzer does her best work in the night scenes: Streetlights cut through darkness to pool below the feet and on the backs of pedestrians in a hard sodium glare. In “Restaurant Workers Eating,” a purplish glow seems to partially dissolve the seated figures in the foreground, while behind, only the cartoonish outline of other patrons suggests that this moment was stolen from the routine bustle of a city night. Schutzer’s subjects themselves — the ordinary people of discount stores and diner windows — are given extra volume by her use of wide gestural brush strokes and the almost garish color palate.

Despite their post-impressionist lineage there was something in these paintings, in their elevation of the everyday urban moment, that brought to mind the moods (if not necessarily the methods) of Vermeer — a kind of externalized domesticity by way of Van Gogh and graffiti, given a particular New York kick. It may be the attention to light that suggested this, or the artist’s ability to dignify as simple a thing as two short-order cooks hunched over a plate of fries. Either way, Schutzer proves herself an able artist of atmosphere — she is able to bring to life her city’s improvisational drama in its huge moods and quiet corners alike.