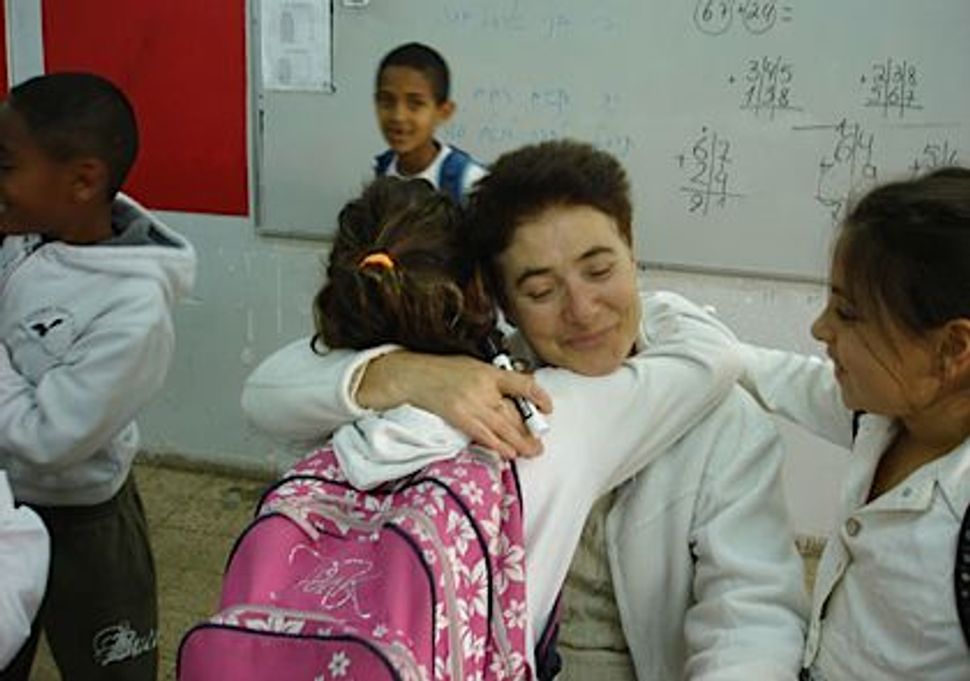 The visual metaphor in the opening scenes of “HaMorah Irena” (“Teacher Irena”), the Ophir Award-nominated documentary about a teacher in the poorest neighborhood of West Jerusalem, tells you everything you need to know about this exceptionally devoted educator. However, you don’t know that until you come to the end of the film.

In “Teacher Irena,” screening October 2 at the Oshman Family JCC in Palo Alto, Calif., debut director Itamar Chen deftly condenses the educator’s year with her third grade class into 52 minutes. The film is short as documentary features go, but it conveys the long journey that Irena takes with her underprivileged, at-risk students.

Chen’s choice to eschew third-person narration, and never have Irena speak directly to the camera, paints a portrait of a woman who ably helps her students succeed while failing herself in important ways.

A widow raising a 7 year-old son, Irena lives in the same Katamonim tenements in which her students live. Some of the children in her class are from families who, like her, immigrated to Israel the Former Soviet Union. The others are Ethiopian immigrants, some with parents who do not speak any Hebrew.

With her heavy accent, Irena prods and cajoles her students into mastering reading and math. At the same time she’s a formidable Red Army drill sergeant and a doting mother hen complimenting students, telling them how smart and wonderful they are with every correct answer they give or properly sharpened pencil they bring to class. The extreme combination gets results.

Unlike teachers in schools in wealthier neighborhoods, where parents are actively involved in their children’s educations and students go home for lunch, Irena’s has to take on additional roles in her students’ lives. She acts in-loco parentis, making sure her charges eat all the food in their free hot meals, warning them not to spit on one another’s sandwiches, and organizing a class party for a girl who doesn’t know exactly when her birthday is. Irena also takes on the role of social worker, providing ad hoc counseling sessions to parents who’ve lost their jobs or do not yet know how to make their way in Israeli society.

When not a single parent volunteers to be on the class’ parent committee, Irena becomes a committee of one. When not one mother or father agrees to accompany the children on a trip to the Tel Aviv beach (so that many of the students can see the sea for the first time), Irena forges ahead as the lone chaperone.

Irena works tirelessly to build her children’s self-esteem and to give them skills with which to build happy lives. As the film progresses, it becomes increasingly evident that she does this at the expense of her own wellbeing.

We see her coming home to her shabby apartment late at night, too exhausted to spend quality time with her son, and she apparently has no social life with friends or relatives. As we stand up and cheer her accomplishments with the kids, we also cry inside for her.

When we see Irena break down in tears following the year-end class party, we recall the opening scenes of the film. In them, she is preparing her classroom for the year. She may be wielding tools to put together a bookshelf or hang up a bulletin board, be we now realize that she was getting ready to drill her students on their academics and hammer into them a sense of self-worth.

The question is: Will she have the strength to carry on herself?

Watch the trailer for ‘Teacher Irena’: