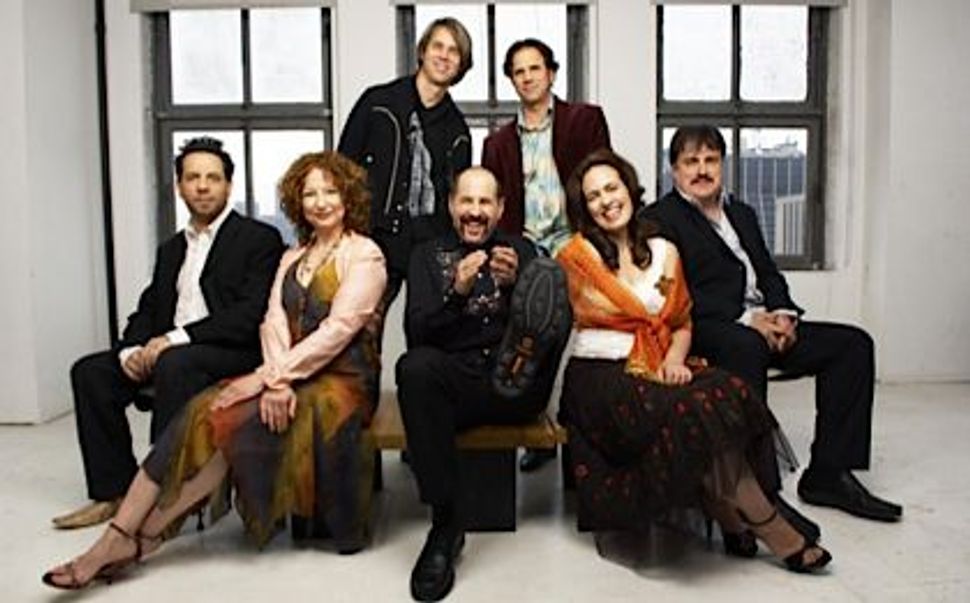 The Klezmatics are 25 this year (where does the time go?), and to mark the anniversary, they’ve released “Live at Town Hall,” a two-disc recording of a performance given in New York five years ago. That concert, itself an exuberant 20th anniversary celebration, was recorded in conjunction with “The Klezmatics: On Holy Ground,” a documentary also released in honor of the band’s silver anniversary year. This is the group’s first self-produced album, and — perhaps owing to the financial struggles alluded to in the documentary — they’ve raised all the money for the promotion of the project themselves, through a fundraising campaign on Kickstarter.

Any new release from The Klezmatics is cause for excitement, and yet one gets the sense that a lot is being recycled in this case, with the album and the film doing double duty for two major milestones. Devoted fans will also note that there’s no strictly new material on these two discs — each of the pieces has been previously recorded on one album or another.

Still, this is less a shlocky greatest-hits album than a pleasant trip down memory lane. The pieces on “Live at Town Hall” are arranged more or less chronologically, so that listening to them is a bit like hearing the band’s decades-long evolution in fast-forward. The Klezmatics’ first compositions — traditional tunes re-imagined for albums like “Shvaygn=Toyt,” (1988) “Rhythm and Jews” (1990) and “Jews With Horns” (1990) — hold up remarkably well, with the mature musicians breathing new life into what always were wonderfully creative arrangements.

“Dzhankoye” enjoys a particularly energetic revival, with violinist Lisa Gutkin playing a blisteringly quick accompaniment to Lorin Sklamberg’s rollicking setting of the tune. It occurred to me, on this listening, that the a cappella vocal introduction to the piece has something in common with the raw and affecting sound of early-American shape-note singing. I don’t know whether Sklamberg meant to reference that particular style, but the passing resemblance points to a source of the Klezmatics’ enduring appeal: the uncanny ability to create klezmer music with unmistakably American roots.

Miracles (or, at the very least, multiple takes) are possible in the studio, which is why all bands must ultimately be judged by the quality of their live albums. There was never much cause to doubt the Klezmatics’ chops, but in “Live at Town Hall,” the musicians also prove that they know how to put on a great show. Upbeat dance tunes alternate with mournful or contemplative ballads, and Frank London’s sparse and moody jazz compositions like “Eyliyohu hanovi,” “Davenen” and “Moroccan Game” serve as the band’s nod to the avant-garde.

Like many celebratory performances, this one features several guest artists, including the incomparable Joshua Nelson, with whom the band collaborated on the 2004 album “Moses Smote the Water.” Nelson’s “kosher gospel” — the ecstatic sound of African-American gospel singing matched with deeply religious lyrics based in Jewish, rather than Christian, faith — is right up The Klezmatics’ alley, and the performance of “Elijah Rock” might make even non-believers leap out of their seats.

In a magnanimous gesture, the Klezmatics also invited a few of their ex-bandmates to contribute to the Town Hall performance: Margot Leverett, founding Klezmatics clarinetist and current leader of the Klezmer Mountain Boys, has a slinky cameo in “Bobe Tanz,” and David Krakauer, yet another former Klezmatics clarinetist, gets called up onstage for a frenetic medley of tunes from the “Jews With Horns” album.

I half-hoped to hear from Alicia Svigals, the founding violinist who left the band in an acrimonious 2002 split, but she remains conspicuously absent from both the new documentary and the anniversary album. With Leverett there, it didn’t seem impossible that Svigals might appear, too (the two founded the all-female klezmer group Mikveh together), but it looks as though reconciliation, if it is to come at all, will have to wait for another anniversary.

Without any such tearful reunion, perhaps the most poignant moments in this performance come during the “Dybbuk Suite,” a medley of pieces the Klezmatics wrote for the 1997 Tony Kushner play “Dybbuk, or Between Two Worlds.” “Possessed,” the appropriately haunting album that came out of that collaboration, is one of the group’s best, and it is almost equally effective presented in miniature: Somber, unison singing on the syllable “ma” gives way to a wistful piano and trumpet melody; London’s achingly beautiful setting of Kushner’s bittersweet lyrics for “Fradde’s Song” is perfectly matched to the delicate lilt in Sklamberg’s voice, and unison singing returns in Paul Morrissett’s ominously majestic “Der shvartser mi adir.”

Another highlight is the group’s soulful cover of Holly Near’s protest song “I Ain’t Afraid,” which feels especially resonant amid recent tenth anniversary 9/11 commemorations. (The Klezmatics’ adaption of the song, which includes a Yiddish verse by Michael Wex and Adrienne Cooper, first appeared on “Rise Up! Shteyt Oyf!” in 2002, when the memory of the attacks was still painfully fresh.) Building from a simple, resolute refrain to a frenzied wail, the Klezmatics’ throaty version of the song comes across as a brilliant exorcism of anger and fear.

Rounding out “Live From Town Hall” are several selections from “Wonder Wheel,” the album, that, with the help of lyrics by Woody Guthrie, won The Klezmatics a Grammy award in 2006. A klezmer purist (is there such a thing?) might wonder why this, of all the Klezmatics’ stellar albums, was the one to receive that prestigious honor: the lyrics are in English, not Yiddish, and they were written decades before the band came into existence. Though some of the pieces sound like familiar klezmer dances, others are situated firmly within the genre of dust-bowl folk-blues that made Guthrie famous. But skeptics need only listen to Gutkin’s gently persistent “Gonna Get Through This Word” or London’s hymn-like “Holy Ground” to realize that The Klezmatics and Guthrie are kindred spirits: They share his penchant for the unflinchingly earnest as well as the irrepressibly silly (see “Hanuka Gelt”), and their kaleidoscopic homage to American roots music would no doubt have delighted him.

I like to think that both Guthrie and his mother-in-law, the Yiddish poet Aliza Greenblatt, would have appreciated the expansive, madcap hybridism of “Live at Town Hall.” In addition to being spectacularly fun to listen to, the album also addresses the question of what it meant to be a Jewish American at the turn of the 21st century. Let’s hope that The Klezmatics will still be around — record label or no record label — to check in again 25 years from now.