Friday Film: Behind the Scenes of ‘Jewish Arena Rock’ 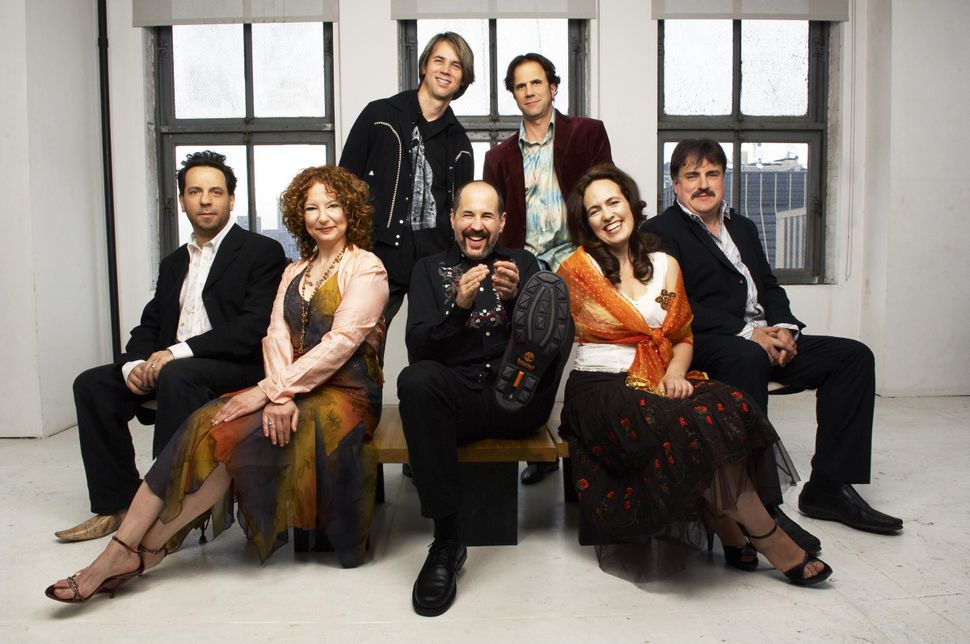 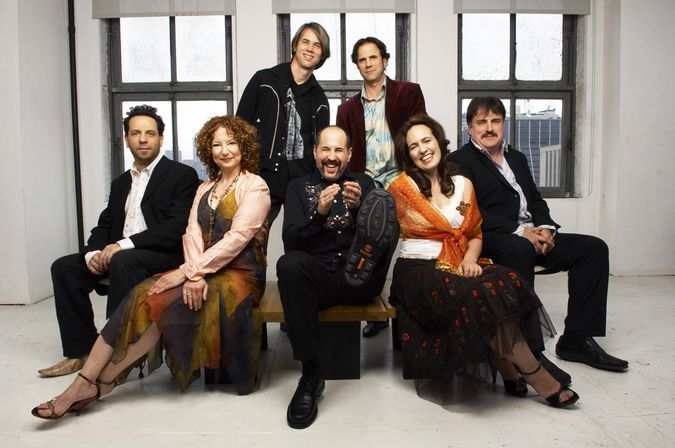 It’s a bit of tongue-in-cheek analysis calculated to make us chuckle (picture these mild-mannered, middle-aged folks head-banging in eyeliner and platform heels!) — and yet there’s truth in Cohen’s quip. The Klezmatics are, in a certain sense, a big-time group, having achieved a level of name recognition that’s rare in world music circles, and — it would seem to go without saying — rarer still for contemporary groups who sing in Yiddish. From an ethnomusicologist’s perspective, they’re interesting because they don’t just mimic old recordings: Here is something that at least approximates a living tradition — new tunes are composed, old tunes combined with jazz and gospel elements, Yiddish lyrics written about workers’ rights and gay pride. The group has been together for 20 years, released nine albums, collaborated with Itzhak Perlman and Nora Guthrie, and won a Grammy Award. And now, another milestone: The Klezmatics are famous enough that someone thought to make a documentary about them.

The film itself, screening March 29 at the Detroit Jewish Music Festival and March 30 at the Maine Jewish Film Festival, provides a meandering tour of the band’s activities over a period of four years. We meet the band members and their families; hear a few stories about the group’s early days; travel with the band to Wisconsin, Germany, and Poland; watch a recording session for the “Wonder Wheel” album; listen to some squabbling over financial troubles and scheduling conflicts; and hear testimonials from a variety of musicians, musicologists, historians, Yiddishists, and other fans. The Grammy win (Best Contemporary World Music Album, 2006), for “Wonder Wheel,” which features previously unrecorded lyrics by Woody Guthrie, is presented as a dreary anti-climax. The award doesn’t boost sales of the album, the band members remain strapped for cash, and when the band’s record label folds, its office space is converted into a methadone clinic.

It’s a bittersweet moment, and though the band members are relatively upbeat in their interviews, there are threads of sadness and fatigue woven through Anjou’s otherwise unfocused narrative. Here’s a group arguably at the pinnacle of success in its genre, and yet the band members still struggle to make ends meet. Many have spouses who earn salaries in more traditional jobs, most take on additional playing and teaching gigs whenever they’re not on tour with The Klezmatics, and one — drummer David Licht — takes a sabbatical and then quits the band to spend time with his children and pursue his “plan B,” a career as a housepainter.

As a person who has contemplated a career in music, I’m perhaps unusually drawn to this type of financial minutiae, but I suspect that I won’t be the only viewer depressed to learn that The Klezmatics’ lives are pretty similar to those of other struggling musicians. Frank London lives with his partner, Tine Kindermann, and children in what he calls “lovely, subsidized, poor people’s housing” before purchasing what can only be very generously called a fixer-upper in Brooklyn’s Bedford Stuyvesant neighborhood. Violinist Lisa Gutkin remarks that she has chosen a career in music over having children. (“I have nieces,” she adds hastily.) Vocalist and accordionist Lorin Sklamberg, who lives with his partner, Michael, and children in Park Slope, admits that all of his income as a musician is “not exactly enough to support life in New York City.” When The Klezmatics start recording “Wonder Wheel,” they do so “on faith,” without a record deal, dipping into their own pockets to fund the project. In one meeting, Gutkin suggests that the band pack homemade meals for an upcoming out-of-town gig. “We can feed ourselves in Hoboken,” bassist Paul Morrissett counters.

All of this lends another layer of irony to Cohen’s heavy-metal-arena-rock/far-out-world-music-group comparison: you can’t trash hotel rooms if you can barely afford to stay in hotels in the first place. Still, fans of The Klezmatics will watch this documentary for the same reasons that metal fans might tune-in to, say, the VH1 Behind the Music special about Mötley Crüe. There certainly isn’t as much drug abuse or jail time in The Klezmatics’ story, but surely this, like any other decades-old band, must have its share of legendary quarrels, screaming matches, and love affairs. Anjou’s film offers a few tantalizing hints without delving deeply into conflicts that, if explored, might have helped show how the band’s identity has been shaped over time. A cutesy cartoon menorah graphic — with band members’ faces appearing as candle flames and a spinning dreidel showing the passing years — serves to gloss over frequent changes in the band’s personnel, without discussing the artistic and personal differences that might have caused people to come and go.

Tensions between the band’s forward-looking approach and its commitment to the history of Yiddish music might also have been explored in greater depth. The film starts with a scene from Sklamberg’s Yiddish lesson with the late Pesach Fiszman, who believed that Yiddish must be loved not just with the “heart and soul” but also “with the mouth.” When the band begins work on “Wonder Wheel,” London remarks that it’s the band’s first English album, and that the lack of Yiddish might alienate some fans. Were some fans — people like Fiszman — upset? Did other band members have doubts as well? Anjou leaves these questions unanswered. Elsewhere in the film, when the band is on tour in Poland, they encounter some resistance from people who feel that, rather than harkening back to an older Jewish history, klezmer music brings to mind the more immediate horrors of the Holocaust. In another great line, the ethnomusicologist Cohen says that klezmer music should be thought of not as “the E-minor chord of the Holocaust,” but rather the “D-major chord of our weddings,” but it would have been nice to hear the musicians themselves speak more directly about their relationship to this fraught history.

Real fireworks fly only late in the film — largely between London and Gutkin, when London backs out of a previously-booked tour in order to pursue a teaching opportunity. There are a few uncomfortable scenes; we think for a moment that London might get kicked out of the band, but we also sense that no one really wants him to go. It’s a classic scenario: Inevitably, some band members will get more outside gigs than others; some will have their eyes on solo careers, while others remain more fiercely loyal to the group. Gutkin and London butt heads fairly often, but this conflict is more keenly felt, especially compared to an earlier spat (on the tour bus in Europe) that seems staged for the purposes of the film.

Tellingly, though, this argument is essentially a practical one: If the band made more money, London probably wouldn’t have been tempted to stray. It’s a shame that we don’t get to witness any real disputes stemming from artistic or spiritual differences. Far from merely feeding our appetite for scandal, they might also have showed us something about what makes the band tick. In the end, the problem with “The Klezmatics: On Holy Ground” is that it comes across as too polite. When Anjou senses disagreement within the band, he too often shies away, rather than asking the probing questions that would force the musicians to describe their philosophies in more precise detail. This isn’t, finally, a run-of-the-mill arena rock band. The Klezmatics’ music is unique and revolutionary enough that it would have been rewarding to hear more about the peculiarities of their creative process. In any rehearsal or recording session, the most contentious moments are often the most interesting ones.

Watch the trailer for ‘The Klezmatics: On Holy Ground’:

Friday Film: Behind the Scenes of ‘Jewish Arena Rock’