Nebuchadnezzar Becomes a Jew at the Met 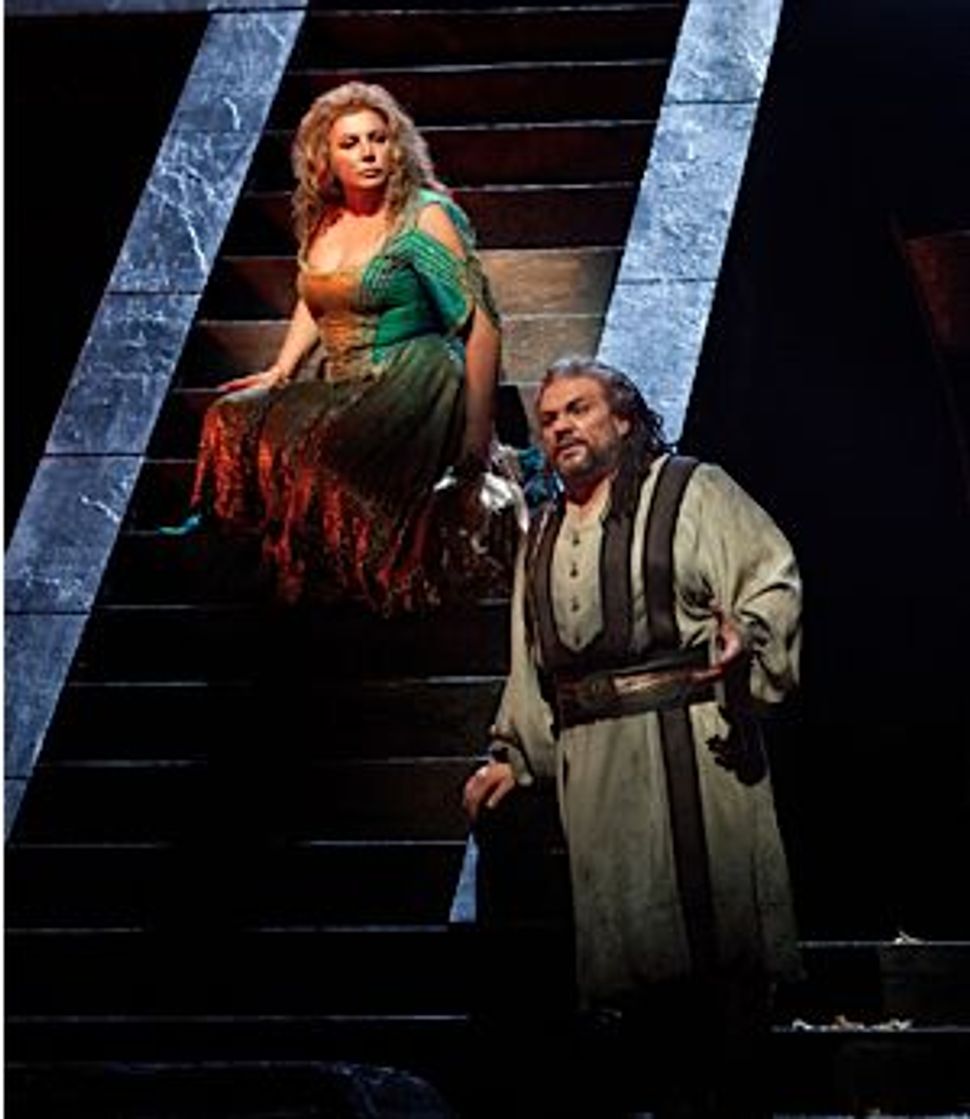 Maria Guleghina as Abigaille and Zeljko Lucic in the title role of Verdi?s ?Nabucco.? Image by Marty Sohl/Metropolitan Opera

Just in time for the High Holy Days, the Metropolitan Opera is bringing back its production of one of the few works of music that helped change history. “Nabucco” (Nebuchadnezzar), a wildly eccentric story inspired by the biblical Lamentations of Jeremiah, was Giuseppe Verdi’s first professional breakthrough, and it helped inspire the Risorgiomento, which ended the Catholic church’s political control of Italy as well the infamous Nuremberg-like laws imposed on Jews by Pope Pius IX.

In the opera, Nabucco’s two daughters both fall madly in love with a Hebrew prince, and Nabucco himself converts to Judaism after being struck by lightning. The chorus of Hebrew slaves, “Va pensiero” (“Fly my Thoughts on Golden Wings”), has become Italy’s unofficial national anthem. It is spontaneously sung at soccer games, and all sorts of other occasions.

This past spring, conductor Ricardo Muti, in an almost unprecedented gesture, halted his performance of “Nabucco” at the Rome Opera after an audience member shouted “Viva L’Italia!” during the tumultuous standing ovation which followed the chorus. Completely breaking with tradition, Muti turned around and directly addressed the audience: “Yes, I am in accord with that ‘Viva L’Italia!’ When the chorus sang ‘Oh mia patria si bella e perduta!’ [Oh, my country so beautiful and lost!], I thought to myself that, if we slay the culture on which the history of Italy is founded, truly our country will be beautiful and lost.” He then conducted the audience in a repeat of the chorus (you can watch the video here) and there wasn’t a dry eye in the house.

Finance minister Giulio Tremonti, who had instituted drastic cuts in the cultural budget, thus prompting Muti’s impromptu speech, had been quoted as saying, “You can’t eat culture.” The government backed down in the face of this Rome opera sing-along. Muti is reported to have marvelled that everyone in the audience knew all the words!

In New York it is rare when the audience does not demand this chorus be repeated, although there is no history of the audience joining in — yet.

Nebuchadnezzar Becomes a Jew at the Met