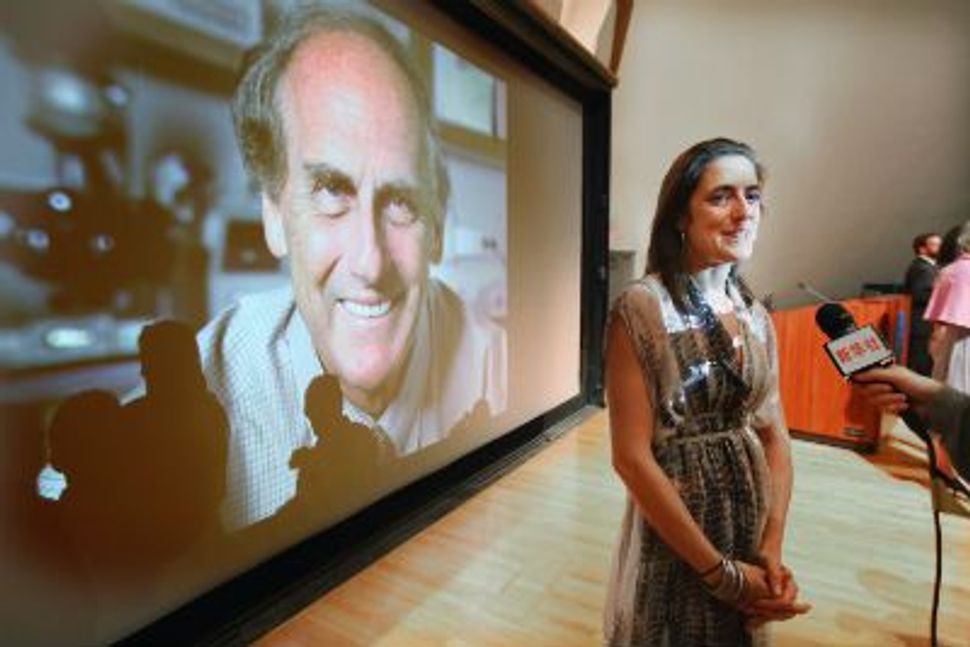 Alexis Steinman, daughter of deceased 2011 Nobel Prize in medicine winner Ralph Steinman, speaks at a press conference in front of a photo of her father at Rockefeller University. Image by Getty Images

As a result of some unusual timing, the Nobel Prize for Medicine has been awarded posthumously to scientist Ralph M. Steinman. Steinman, a Canadian-born researcher who worked at Rockefeller University, died of pancreatic cancer on September 30, but word of his passing did not reach the Nobel Committee in Sweden before it announced the award today. The Nobel Committee does not grant posthumous awards.

Nobel secretary general Goran Hansson called this a “unique situation, because he died hours before the decision was made.” The panel will have to decide what to do with the prize money that would have gone to Steinman, but it will not name a substitute winner.

Steinman, originally from Montreal, was awarded the prize together with his colleagues Bruce Beutler of the United States and Jules Hoffmann of France for their work on tumor vaccines. Steinman was recognized for his seminal immunology work, including his discovery of dendric cells in the 1970s. Steinman, who died at age 68, had extended his own life by using a dendric-cell immunotherapy on himself after he was diagnosed four years ago with pancreatic cancer.

According to Alexis Steinman, the deceased researcher’s daughter, her father was unaware of the Nobel Committee’s impending decision to give him the award. “We are all so touched that our father’s many years of hard work are being recognized with a Nobel Prize. He devoted his life to his work and his family and he would be truly honored,” she said.