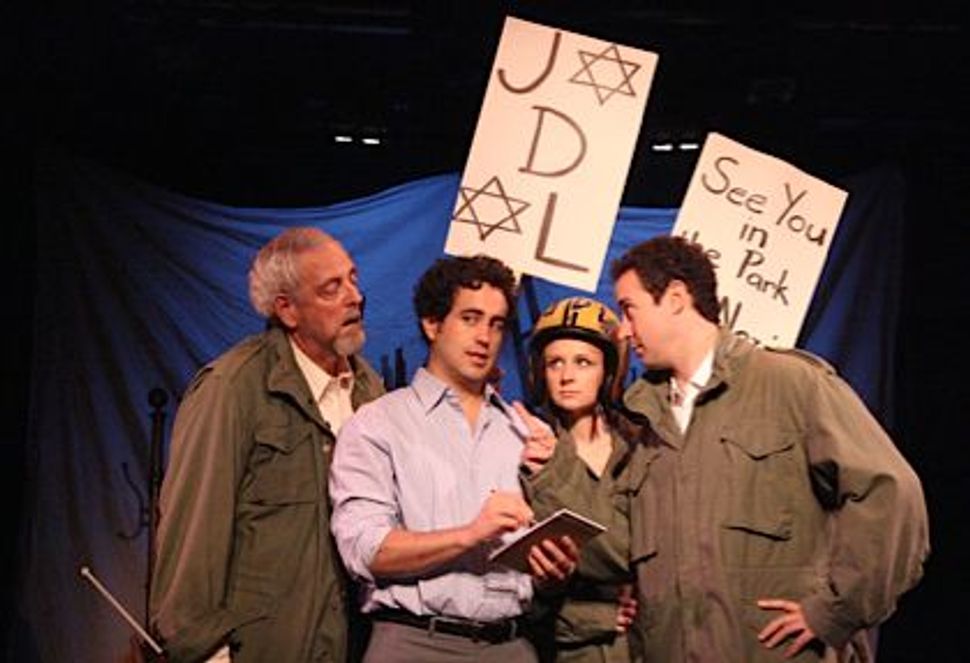 “The God of Isaac” — James Sherman’s semi-autobiographical dramedy about the 1977 American Nazi threat to Skokie, Illinois, and how it inspired an Americanized Jew to return to his roots — starts promisingly enough.

In an opening worthy of Philip Roth, Adam Korson begins the show in character as playwright and journalist Isaac Adams with the usual announcement about silencing cell phones, only to be disrupted by a theatergoer. It turns out the middle aged female heckler is none other than Isaac’s overbearing Jewish mother (Karen Kalensky).

Isaac’s complaint is that his parents didn’t raise him to be Jewish enough. His identity crisis is triggered by the announcement that neo-Nazis are going to march in Skokie, a largely Jewish suburb of Chicago, home to 40,000 Jews, 5,000 of them Holocaust survivors. Slinging a then-topical reference, Isaac drolly likens the brownshirts to gay basher Anita Bryant, who said that she’d “march down Christopher Street.”

Prior to this blast (or blitzkrieg) from the Hitlerian past, Isaac had been content to be a fair weather Jew. With a few Portnoy-like quips, Isaac drops his Jewish girlfriend Chaya Rosenblatt (Jennifer Flaks) for non-Jewish Shelley (played by Corryn Cummins in a preternaturally blonde wig), and they promptly marry.

But Isaac’s rediscovery of his heritage leads to clashes with his wife. When he insists “the Jews need me to be Jewish,” she retorts: “The Cubs need pitching. Why don’t you take up baseball?” Isaac’s soul-searching leads to a visit with the rabbi (Peter Van Norden) he hasn’t seen since his bar mitzvah, where he reveals his religious doubts. As he ponders the meaning of being a Jew, he questions God’s treatment of Moses.

Throughout the play there are pop culture allusions, with Jewish versions of vignettes from movies such as “My Fair Lady,” with a Professor Higgins type character (Jason Weiss, who plays multiple roles) teaching a non-Jewish woman how to properly pronounce Yiddish. But given the Nazi backdrop there’s a turn to the dramatic when the Jewish Defense League arrives on the scene, determined to resist the fascists by any means necessary. Sherman takes some potshots at the JDL, presenting them as slogan spouting, robotic counterparts to the Nazis.

“The God of Isaac” also tackles the American Civil Liberties Union’s legal defense of the Nazis’ First Amendment right to march. The play ponders why an organization substantially funded and staffed by Jews should defend free speech for Nazis, and notes that many card carrying ACLU members quit paying dues because of the contretemps.

Sherman, alas, is akin to a theatrical Moses in that he takes us to the Promised Land in Act I, but milk and honey do not flow in the second act. The Nazis vanish into thin air with a few lines of dialogue, robbing the play of what could have been its most dramatic presence. Although the coast ultimately clears for Chaya and Isaac to reunite, for some odd reason, they don’t. Though deftly directed by Darin Anthony, “The God of Isaac” comes off like a series of sketches, instead of as a cohesive play.

”The God of Isaac” is a production of the West Coast Jewish Theatre. It runs until November 27 at the Pico Playhouse in Los Angeles.