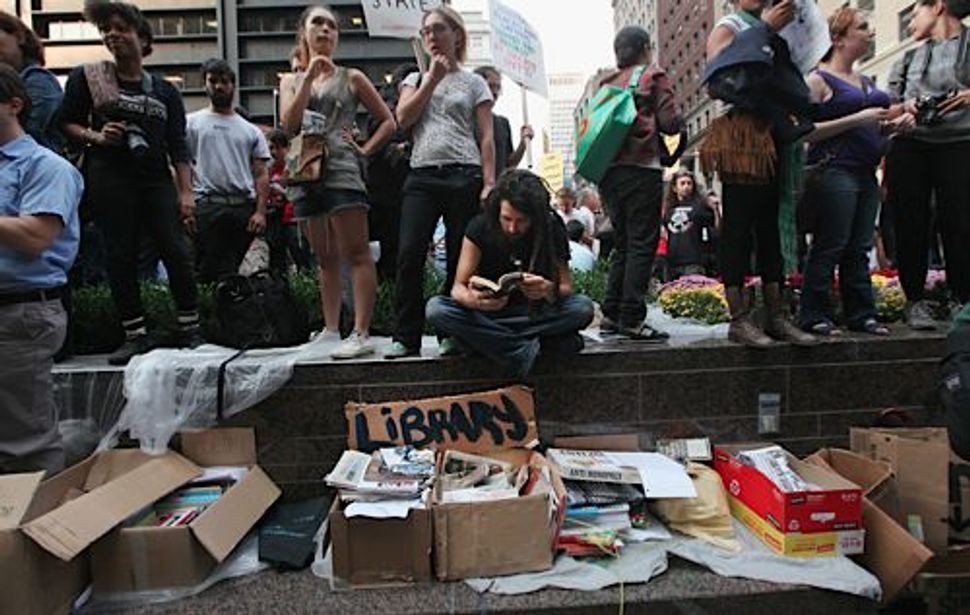 Occupy Wall Street has its share of misspelled, ungrammatical placards, but the ongoing protests in Lower Manhattan — and similar efforts around the country and the world — are receiving a strong dose of literary acumen. In addition to efforts such as The Occupy Wall Street Library and The Occupied Wall Street Journal, a growing list of writers have signed on to Occupy Writers, a website collecting the names and literary contributions of authors, editors and other writerly types who support the Occupy Wall Street protests.

The effort was spearheaded on October 9 by journalists Kiera Feldman and Jeff Sharlet, after a Twitter exchange between Sharlet and Salman Rushdie, one of the first signatories. The list now includes over 200 writers including Margaret Atwood, David Bezmozgis, William Deresiewicz, Barbara Ehrenreich, Sasha Frere-Jones, Neil Gaiman, Jerome Rothenberg and Ayelet Waldman. A number of Forward contributors are also represented, including both Feldman and Sharlet (who is also the former editor of the Yiddish Book Center’s magazine, Pakn Treger).

Sharlet told the Huffington Post that the wide range of writers indicates the broad support the movement is receiving. “There are radical writers on this list, but there are also the kind of writers who maybe Bloomberg takes their books with him on a vacation to the beach,” he said. “We wanted to say, ‘Look, you’ve been outflanked. The movement draws as much from the people you consider to be your base.’”

Although the list of signatories is being screened, Sharlet said that the aim is include both the obscure as well as the famous. “There’s a way in which status dissolves in the Occupy movement, and we like the idea that that would be reflected in the site, so you start with this group of established writers, and then it democratizes. The person who has a tiny book that nobody’s ever read, and their name begins ‘Ru-‘, they’re next to Salman Rushdie,” he said.

In Zuccotti Park I felt a kind of lightening of a weight, a lessening of the awful isolation and powerlessness of knowing we’re being lied to and robbed on a daily basis and that everyone knows it and keeps quiet and endures it; the terror of thinking that my own grandchildren will suffer for whatever has been paralyzing us until just now. I kept feeling these intense surges of emotion—until I saw a placard with a quote from Walt Whitman’s “Song of Myself: “I am large, I contain multitudes.” And that was when I just lost it and stood there and wept.

Not to sound cynical, but I smell an anthology down the road.