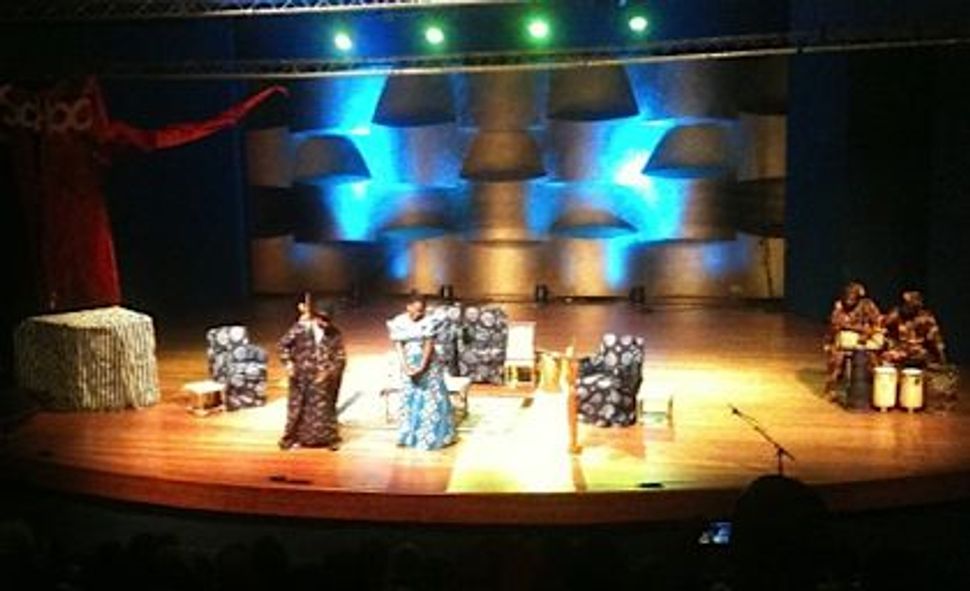 “Development need not be an enemy of culture.”

Nigerian theatre director Se-gun Ojewuyi mops his brow lightly as he speaks. It’s a warm afternoon, in the middle of rehearsals for the evening’s performance, but he is composed and unhurried as he reflects on his first visit to Israel.

In late October the National Troupe of Nigeria visited Israel as guests of the Africa-Israeli Stage, a diverse and burgeoning Israeli company building cultural ties with Africa. During its brief visit, the Troupe participated in a gala performance at the Tel Aviv Museum, celebrating the 51st anniversary of Nigerian Independence. But the visit was about more than serving as ambassadors of the rich, diverse but under-appreciated cultural traditions of Nigeria. The visit was also — according to Ojewuyi — an opportunity to contemplate the role of culture in emphasizing a positive national identity.

The National Troupe of Nigeria is the premier performing arts institution in Nigeria, tasked with celebrating the cultural heritage of the country through dance, music and drama. With an extensive record of national and international tours, the Troupe chose to present, on its first visit to Israel, a performance of “The Engagement,” written by the noted Nigerian playwright and dramatist Femi Osofisan.

Adapted from the Chekov play “The Marriage Proposal,” “The Engagement” is a topical choice for an international performance, as Martin Adaji, the artistic director of the National Troupe of Nigeria explained. “The characters focus on material issues, quibbling and wasting energy arguing about insignificant matters, whilst overlooking substantive matters — human emotions. It is true of human nature in general,” he said.

“The Engagement” is a simple yet pointed farce, focusing on the thwarted attempts of the protagonist to ask for the hand of his neighbor’s daughter in marriage. He searches for the inner resolve to do the deed; however, he allows himself to be sidetracked, taking both him and his intended away from the matter at hand.

“The play is rooted in the tradition of Moliere, taking comedy from slapstick to a sophisticated tool for observation and comment on moral issues,” Adaji observed. The material concerns of the original — land, wealth, ownership — transfer effectively across time and geography. More significant, these factors resonated even with an Israeli audience not necessarily schooled in the intricacies of African culture.

It is this principle of cultural universality that underpins the existence of the Africa-Israeli Stage. “The challenge is to move beyond the inclination, amongst Western audiences, to engage with art from Africa from an exotic perspective,” said company co-founder Yaffa Schuster during a short break from rehearsals.

Schuster’s involvement with art and theater from Africa dates back to her student days in the diverse social and educational environment of Haifa University. “I was from Jerusalem, it was the first time I had had the opportunity to engage with Ethiopian culture,” she said.

In 1994, she founded the Netela Theatre Company — the name referred to the traditional shroud-like garments worn by many Ethiopians, a play on the notion of white on black. An early inspiration was the Nigerian Nobel Prize laureate, Wole Soyinka. “Once you discover Soyinka, you wonder, ‘how is it that other people do not know this?’’ Netala said.

Netela’s principal objective was to focus on cultural creation from across the African continent, including plays, poetry, literature and folktales. Along with collaborator Eitan Salem, the company staged Soyinka’s play, “The Lion and the Jewel,” at the Edinburgh Festival in 2007, a performance that earned praise from the playwright himself.

Netela eventually disbanded, but Schuster and Salem re-grouped as the African-Israeli Stage; the company toured Nigeria in 2010, performing at the National Theatre in Lagos and at the Obafemi Awolow University in Ile-Ife — the cradle of the Yoruba culture indigenous to southwestern Nigeria. The tour was well received, and laid the foundations for collaboration with the National Troupe of Nigeria.

But promoting non-indigenous art forms in Israel has not always been easy. Schuster noted that audiences are largely unfamiliar with the oral traditions in which much African art finds its origins. Does the answer lie in expanding the horizons of the “gate-keepers” — the custodians of cultural reference points? “Yes,” she said. “But it must be something that one does because one wants to, not just some superficial or politically correct contact.”

Eitan Salem, the co-founder of the African-Israeli Stage, came to Israel from Ethiopia at the age of 10. Even then he knew something was missing from the cultural conversation in Israel. “There was no meaningful representation of my culture,” he said.

Israel is not always the easiest place to live for people who fall outside the demographic mainstream. One way to narrow the gaps, Salem argues, is to broaden the cultural horizons of the population. “It’s a gateway to appreciating and respecting other cultures and traditions,” he noted. “It is a shame that even now, the world is largely unaware of the rich, ancient culture of Africa.”

Cultural education is a two way street, as Segun Ojewuyi observes. An Assistant Professor of Directing and Acting at Southern Illinois University, Ojewuyi has over 20 years experience directing in Europe and the United States. The recipient of numerous awards, including a Commonwealth Fellowship and a Ford Foundation grant, Ojewuyi is presently on sabbatical from his teaching position. “Nigerian theater is resilient, and continues to play an important role in the general pool of Nigerian development,” he remarked. “I will return from my sabbatical refreshed, recharged and with new ideas for work in America taken from a different context.”

“In Israel, scientific and technological development is rooted in the appreciation of the country’s underlying culture,” he added. “This interplay, between culture and development is missing in the contemporary Nigerian dialogue. We need to find a way to tap into our cultural values, rather than borrowing, rather than creating a hybrid with no contextual roots.”