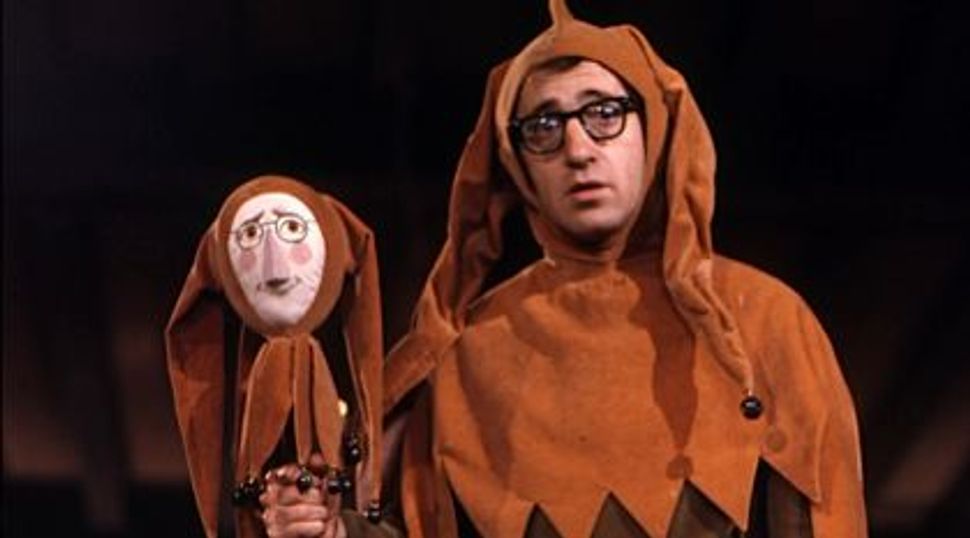 Woody Allen has always been something of an enigma, slipping effortlessly and Zelig-like from one persona to the next.

He started as a gag and television writer (most famously for Sid Caesar), became an extremely successful stand-up comic, wrote humorous essays for The New Yorker (many of which were collected into best-selling books), played jazz clarinet, wrote Broadway plays, metamorphosed into a screenwriter-director of lowbrow, Catskill-style comedies, and then of increasingly serious (and occasionally less accessible) work.

And oh yes, he married his girlfriend’s adopted daughter.

Robert Weide, a filmmaker who specializes in comics and comedy (his work includes “The Great Standups” for HBO and the Emmy-winning “W.C. Fields: Straight Up” for PBS), convinced the normally reclusive star to allow him what the press release describes as “unprecedented” access. The result, shown over two nights on November 21 and 22, is a masterful PBS special, “Woody Allen: A Documentary.”

Unprecedented may be overstating the case, but not by much. Allen previously cooperated with Eric Lax, author of the aptly titled (and extremely good) “Woody Allen: A Biography.” He also allowed filmmaker Barbara Kopple to accompany him and his jazz band on a European tour for a documentary, “Wild Man Blues.” For the most part, however, he’s avoided the media and does not even allow cameras on his sets to gather behind-the scenes promotional footage.

Still, there are no great revelations here; anyone who’s followed Allen’s career will be familiar with most of the details. But the documentary is fascinating, informative, and paints a complete picture of someone whose work will likely be studied as long as people go to the movies.

Allen Stewart Konigsberg was born in New York and grew up in an unhappy Jewish family. Letty Aronson, his sister and the executive producer of most of his films, says their parents “wanted him to be a pharmacist. He was the wrong person born to those parents.”

His mother and father bickered constantly, or didn’t talk at all. Allen started writing gags for local columnists and spent a summer at a mountain resort where he wrote weekly sketches and directed. “You couldn’t sit in your room and wait for the muse to strike,” he says. It’s a lesson he absorbed. Since 1966 he’s written at least one theatrical screenplay a year (most of which he also directed and often starred in), while also writing several TV movies and numerous essays.

His cinematic career began when producer Charles K. Feldman caught his nightclub act and offered him $20,000 to write the screenplay for what became “What’s New Pussycat?” He felt the final product mangled his script, however, and insisted on total control for all future films.

And they came pouring out of him, usually hilarious and wacky in a Catskill kind of way. “Until Annie Hall, I was only interested in making the audience laugh,” he says. There followed a number of important, often successful movies: “Manhattan,” “Hannah and Her Sisters” and most recently his highest-grossing film, “Midnight In Paris.” They earned him 21 Oscar nominations and three wins.

Despite success, Allen is some ways still the insecure Jewish kid from Brooklyn. “Writing is great. You can imagine it’s ‘Citizen Kane.’ But when you have to go out and do it reality sets in. Your dreams of directing a masterpiece are redirected to ‘I’ll prostitute myself and do anything I have to to survive this catastrophe.’”

It isn’t until about 40 minutes into the second part of the documentary that Soon-Yi Previn (who surprisingly is not interviewed) is mentioned. Weide doesn’t ask Allen probing questions. Allen disingenuously claims he’s surprised by the uproar it caused. He didn’t think he was that famous. And after just a couple of minutes they move on.

It’s easy to be critical of Weide’s failure to explore more deeply, but it’s not easy to ask hard questions in a one-on-one situation. Not everyone is Howard Stern. Plus, there’s always the possibility that the wrong question might sufficiently upset Allen that he’d get up, walk away and refuse further cooperation.

Still, it’s a wonderful documentary, and mandatory viewing for Allen’s many fans.

Watch a preview for ‘Woody Allen: A Documentary’: