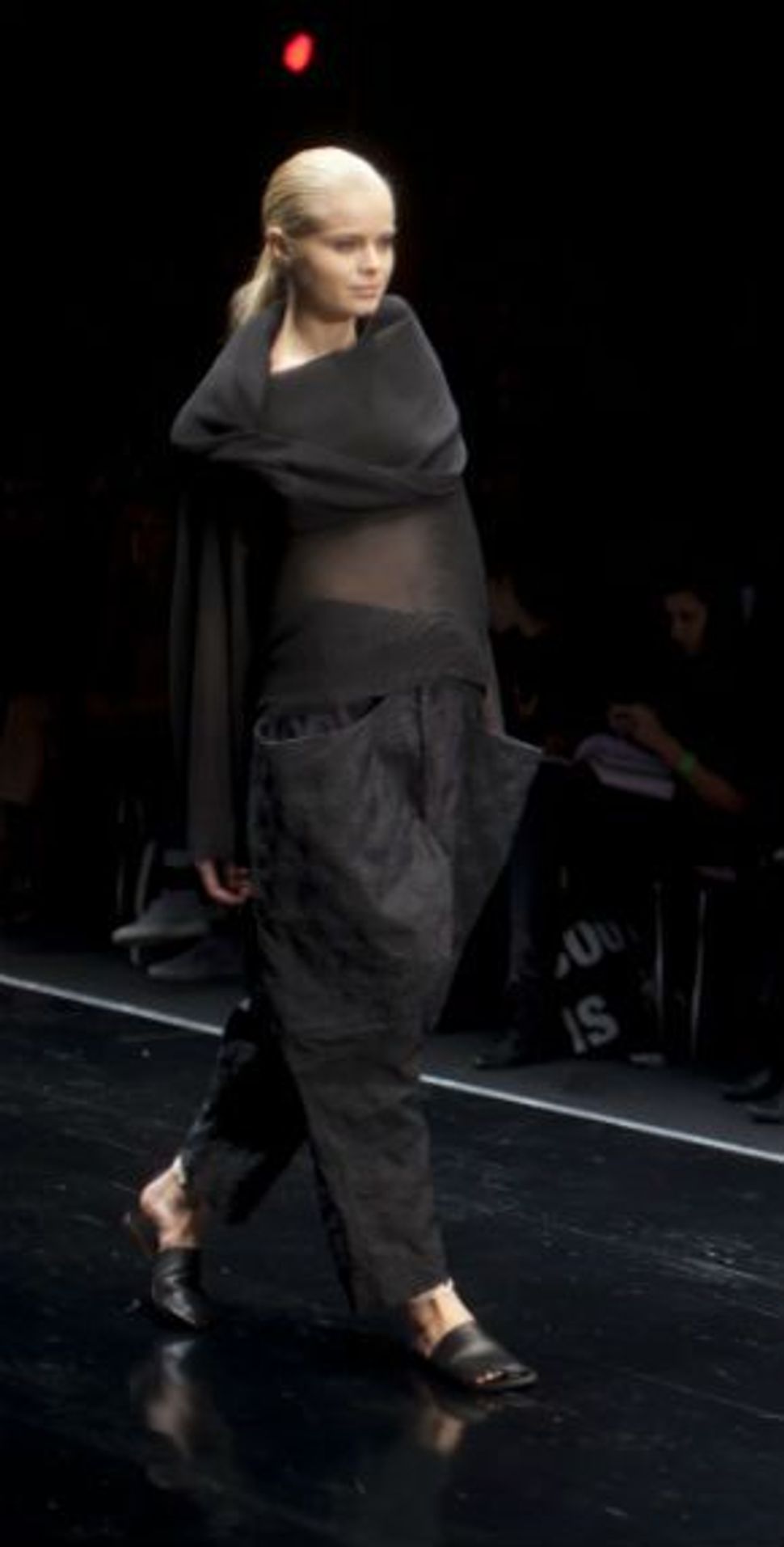 While Americans were eating turkey and giving thanks last week, local designers in Israel were showing their collections for the for first official Tel Aviv Fashion Week in 30 years. Dressed in his signature suit and sunglasses, designer Roberto Cavalli kicked off the over-the-top festivities with an encore showing of his Milan Spring 2012 collection, which included a heavy dose of bejeweled gowns.

The local obsession with all things fashion remained in overdrive well after his departure. Attendees — from Israeli housewives with the right connections to television celebrities to supermodels like Esti Ginzburg — clapped for their favorite runway looks, as well as associated props including belly dancers, Arab musicians and, in one case, rooster headdresses courtesy of menswear line Maurizio. We don’t think the headdresses will translate to international fashion, but a few notable designers caught our eye:

Dorin Frankfurt
Bucking the Israeli trend of loud noisy prints was Dorin Frankfurt, whose simple designs included shift dresses, smart capris and fitted jackets. Frankfurt manufactures three different collections from her Tel Aviv factory: one for the working woman, another for casual wear and a third with limited edition dresses, including evening gowns.

Dorit Bar Or
Israeli actress Dorit Bar Or debuted a line called “Pas Pour Toi” (“Not for You” in French) that featured mostly flowing black dresses with gold leaf motifs drawn by an Orthodox rabbi. She dedicated her collection to Egyptian singer Umm Kulthum and Israel’s fourth prime minister, Golda Meir — though the clothes were a far cry from Meir’s no-fuss style. Onscreen, Bar Or, who is from a Russian background, is starring as Peggy Bundy in the Israeli version of “Married with Children.” She plans to sell Pas Pour Toi in the U.S. in 2012.

Hagar Alembik Hazofe
Designer Hagar Alembik Hazofe collaborated with anthropologist Judy Fadlon on Alembika, a collection of easy-to-wear draping frocks — some clinging to bodies leaving little to the imagination; others intelligently hiding a few extra pounds. Stripes and checks decorated myriad frocks. Simple work shirts — some in denim — redone as dresses were highlights of the show, as were the vests of varying lengths and capelets that topped them.

As if it weren’t enough, Alembika collaborated with Rem Koolhaas’ shoe line, United Nude, to create structured high-heeled sandals, ‘70s style platforms and pumps, including one eccentric zebra print with black and white wedged heels. The line’s mantra: Accept yourself as you are — quite a message in a beach town where clothes often come off when the sun comes out.