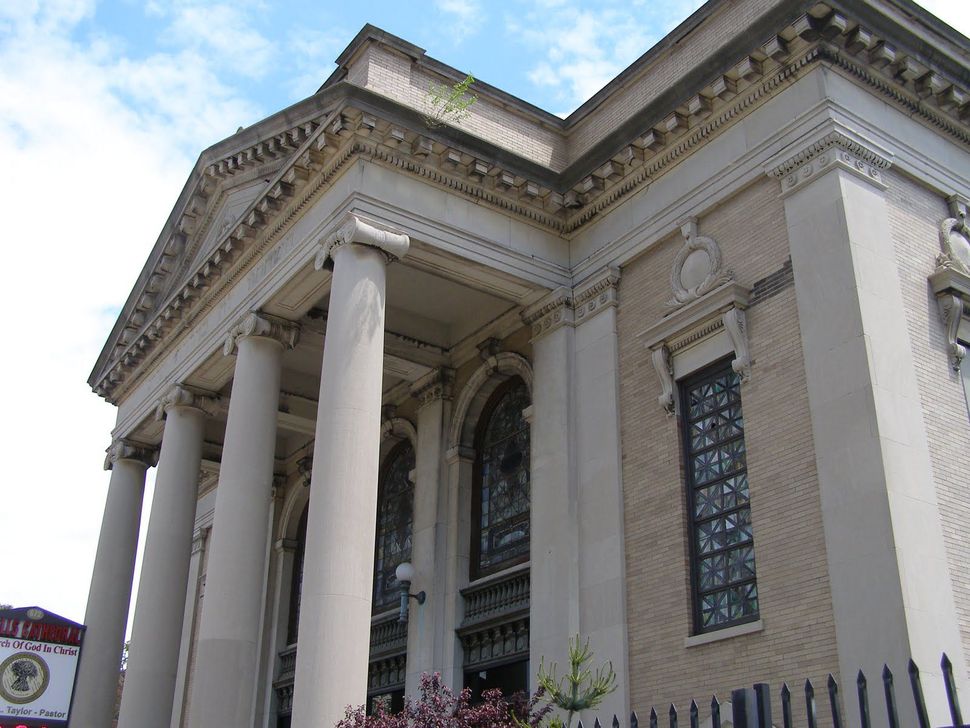 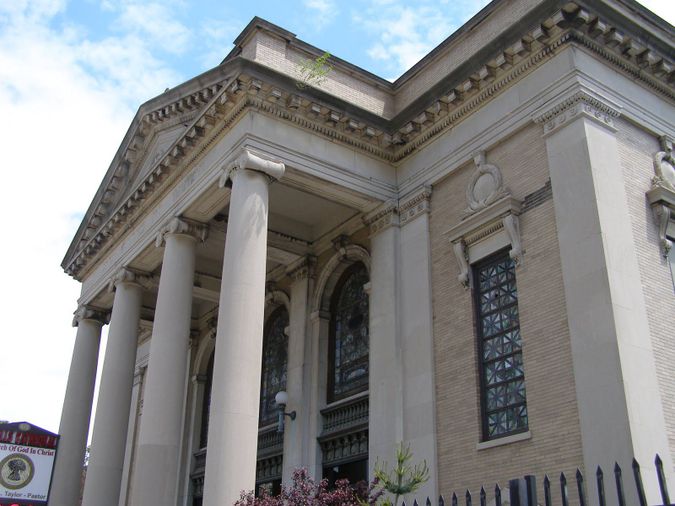 I’ve previously written about the centennial of the classical-style Temple Concord in Syracuse, dedicated in September 1911. Another impressive (Greco-Roman) Temple-like synagogue building celebrating its centennial this year is the former Oheb Shalom synagogue in Newark, New Jersey, designed by Jewish architect William Lehman (1874-1951) and dedicated on September 11, 1911. Since 1958, when Oheb Shalom moved to suburban South Orange, the High Street building has been home to Wells Cathedral, a Pentecostal church.

The building is a an impressive structure with a fine projecting portico of four Ionic columns, and some delicate decoration, including a Jewish Star within a wreath set into the pediment. The entablature carries an inscription in Hebrew, not English, an indication that this was a Conservative synagogue, not a Reform one. My guess is that this is one of the earliest full-blown classical-style Conservatives synagogues. But then again, most Conservative synagogues did not engage in big building campaigns until after World War I, so Oheb Shalom was prescient in many ways.

According to synagogue historian Mark Gordon, “Oheb Shalom had three locations on one block of Prince Street (rented quarters; 1863-64 frame synagogue; 1884 brick synagogue) before it moved to High Street in 1911. Woodrow Wilson was the keynote speaker at the High Street dedication. During Oheb Shalom’s 150th anniversary celebration in 2010, the congregation visited its extant Prince Street (1884) and High Street (1910-11) edifices in Newark and held an interfaith service with the Pentecostal Church which now owns the High Street building. Several older congregants who participated in the service were quite moved to be standing at the original reading table where they became b’nai mitzvah.”

Photos of the building interior can be seen here, together with views of other former synagogues in Newark.

Lehman was apparently Jewish. David Kaufman also has several pages on the 1911 Oheb Shalom in his book on the Jewish Center movement, “Shul with a Pool.” Lehman’s New York Times obituary records that he was a trustee of B’nai Jeshurun in Newark, but Oheb Shalom is his only Jewish project that I’ve been able to identify so far. He appears to have been quite successful in Newark, and designed a lot of movie theaters and some important public buildings. It appears that nothing significant has been written about Lehman, so his life and work could be a nice MA thesis.

Papers of Congregation Oheb Shalom that may relate to the construction of the 1910-11 building are housed at the Jewish Theological Seminary.