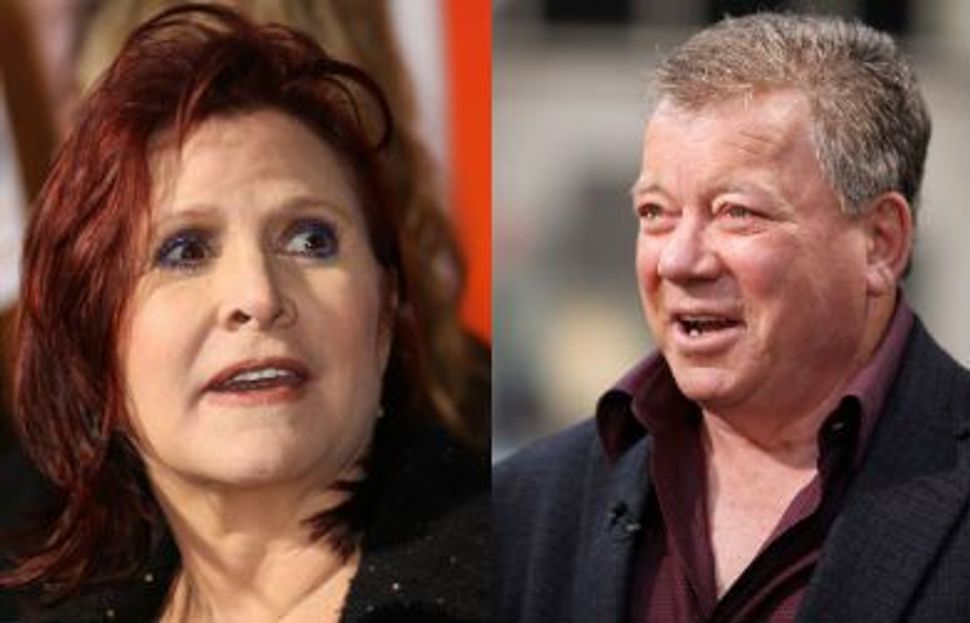 Carrie Fisher and William Shatner have taken their gloves off, duking it out in YouTube videos over which is better: Star Wars or Star Trek.

They poke as much fun at each other’s having aged over the years as they do at the relative merits of their respective legendary productions. Fisher, looking svelt but wearing a way-too-low-cut top, challenges the perennially young-looking Shatner to a “costume-off.” She makes fun of Shatner’s clingy Captain Kirk costume while complimenting her own Princess Leia metal bikini. Shatner’s sharp retort is that at least his costume “has stretch” so that it would still fit his now larger physique. “I don’t know if we are ready to see you in that bikini,” he tells Fisher. “While my costume just needs some push and pull, your bikini would need some real…uplift.”

Of Star Wars and Star Trek in general, Fisher claims, “They’re not in the same league.” She concedes that they both have “star” in their title and that there’s space travel involved in each — but to her, that is the extent of the similarity. Besides, Star Wars merchandising is better, hands down, she says. “My space buns are way better than Leonard Nimoy’s ears.”

In reply, Shatner concedes that Star Wars had better special effects, but goes on to say that they are meaningless when you don’t have such things as a good story, and plot and character development.

And then there is this weird back and forth about sunrises versus sunsets. Maybe you need to be a real Trekkie or bona fide Star Wars fanatic to get what that is all about. The rest of us can just enjoy watching these aging actors have some fun and poke fun at one another — and themselves.

Then Check Out William Shatner’s Response: