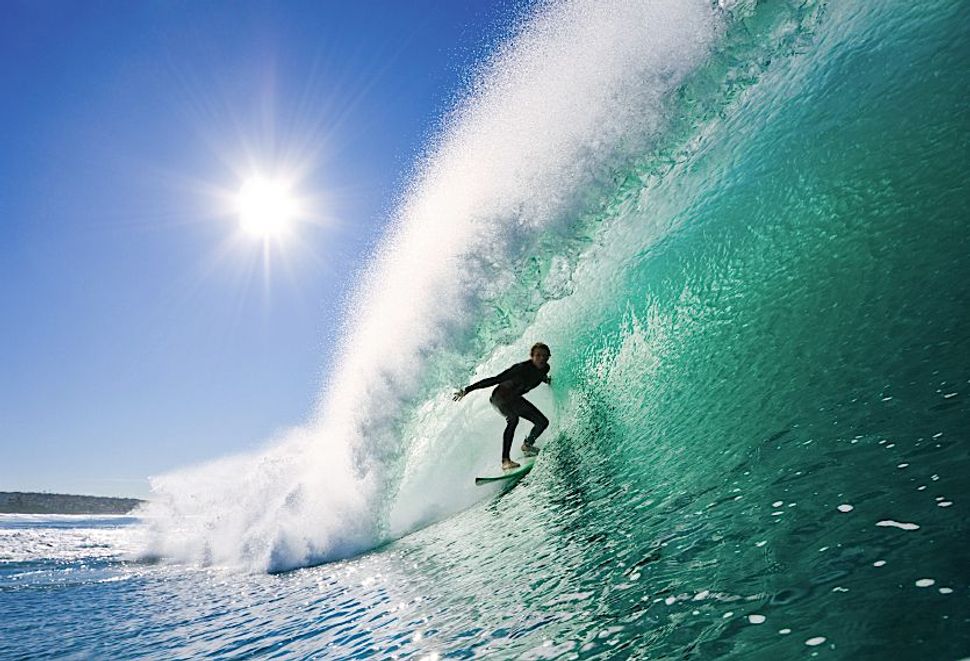 Four Jewish friends from London’s East End were the first Brits ever to hang ten. A recently discovered, long-forgotten home movie from 1929 showing Lewis Rosenberg, Harry Rochlin and Fred and Ben Elvey standing up on a homemade surf board on the waves of Holywell Bay in Cornwall has been authenticated as the earliest evidence of the sport in England.

Inspired by a newsreel they saw of Australian surfers, the teens decided they wanted to try the sport out for themselves. Rosenberg carved a 7-foot board out of balsa wood, and the group headed out to the seaside.

A reporter for the UK’s The Jewish Chronicle who has viewed the film reports: “The soundless black-and-white film, recorded on fragile 9.5mm stock on one of the first home movie cameras, captures the excitement of one of the boys, sticking his head out of the train window, grinning, pipe in mouth as he heads for the coast…The friends smile and pose for the camera. At the beach they lie flat on the surfboard, and attempt to ride the waves standing, often falling and splashing back into the sea.”

According to the website for the Museum of British Surfing, once the fragile film was digitized, it became clear just what a treasure the visual record is. “It was then that the full beauty of the film became apparent, as this group of friends enjoyed a surfing life on deserted beaches in the Channel Islands and Cornwall — sometimes riding the waves naked, and dancing the Hula wearing costumes made from seaweed. Lewis even made a waterproof housing for his camera, which was revolutionary at the time,” it states.

The film, which was discovered by Rosenberg’s daughter Sue Clamp almost 80 years after it was made, has been used already in several documentaries about surfing. In addition, the museum is releasing the full film and a book in 2012 to coincide with one of its exhibitions, “British Surf Riders: Surfing before WW2.”

The young men’s surfing days came to an abrupt halt with the onset of WWII. Also, Rosenberg’s handcrafted surfboard was stolen from his London home. It is surmised that “it’s unlikely the thief would have known it was a treasured surfboard.”