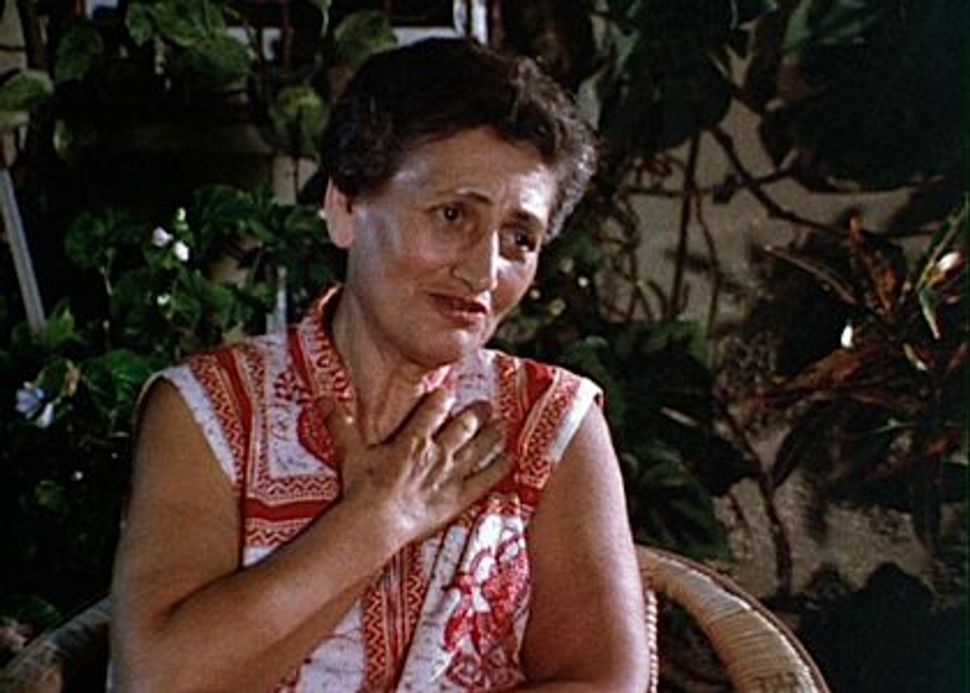 On December 6 I attended a screening of “Shoah, the Unseen Interviews,” sponsored by the United States Holocaust Memorial Museum. Claude Lanzmann’s 1985 epic is more than nine hours long and features interviews with 70 individuals from 220 hours of footage (no documentary images are in the monumental film, only interviews with witnesses and survivors). This was a chance to see outtakes from the 220 hours that did not make the original film, clips which are part of the Steven Spielberg Film and Video Archive.

More than 500 people filled the auditorium at Am Shalom synagogue in Glencoe, Illinois, to see these unseen interviews. The outtakes, which feature footage from interviews with three individuals, two of whom are in “Shoah,” will also be screened in January in the New York Jewish Film Festival, and have already been shown in Cleveland and Detroit.

He speaks also of cutting the hair of a 17 year old young woman, Sarah Levinson — a “nice, friendly” girl who told him that she knew she was going to die but that he should escape and then tell everyone he could what was happening to the Jews in Treblinka. He said he never forgot this girl, that her face was in his mind when he escaped. He tells of how he told the inhabitants in the Warsaw Ghetto that all the Jews in Treblinka were being killed but they refused to believe him.

The third interview is with Ruth Elias, of whom there is merely a glimpse in “Shoah” itself, who talks about her experiences in Theresienstadt and Auschwitz, where she was pregnant and gave birth, before she and her baby became an experiment for Josef Mengele. Elias, preserved at the age when she was interviewed, has a beautiful face, high cheekbones and large brown eyes. Even as she speaks of the horrors she experienced, she speaks in a sweet voice. She talks of being selected to work in the camp kitchen because of her excellent singing, being heard by an SS guard and asked to organize a variety show. The clip ends with her telling how she found her second husband in one such show (she tells her full story in her 1988 book, “Triumph of Hope”). Despite her horrible experiences, the allusion to a story of romance found in the camps seemed a bit like a Hollywood movie about the Holocaust.

Even more chilling and thought-provoking is the second interview, filmed in 1978 with the firebrand Peter Bergson (born Hillel Kook), the nephew of Chief Ashkenazic Rabbi Abraham Isaac Kook. (Outtakes from this Bergson interview were used in the 2009 Simon Weisenthal documentary “Against the Tide.”) Unlike the other two interviews shown, this man is not included at all in Lanzmann’s “Shoah.” Bergson has remained a little-known figure, though a one-hour long documentary, “Not Idly By,” about him will be released in 2012.

Bergson died in 2001, but perhaps now the time is right for his story. Unlike Boma and Elias, Bergson, who is not a survivor, is angry. He’s angry about the lives he couldn’t save because of the reluctance of American Jewish leaders to do anything.

Bergson led the Emergency Committee for the Rescue of European Jewry, but his efforts only upset American Jewish leaders. Why? Because of their fear, he says, that “people will say this is a Jewish war.” He says he asked for an agency and President Roosevelt formed the War Refugee Board. “Jews were afraid to say, Jewish Refugee Board, afraid to say it’s a Jewish war. All the Jewish organizations came to give money so that it wouldn’t be said ‘the American government spent money on Jews.’”

As the night ended, Bergson’s words echoed through the room. This previously unseen footage suggests there is still much Holocaust Museums could teach us about the American Jewish response to the Shoah.