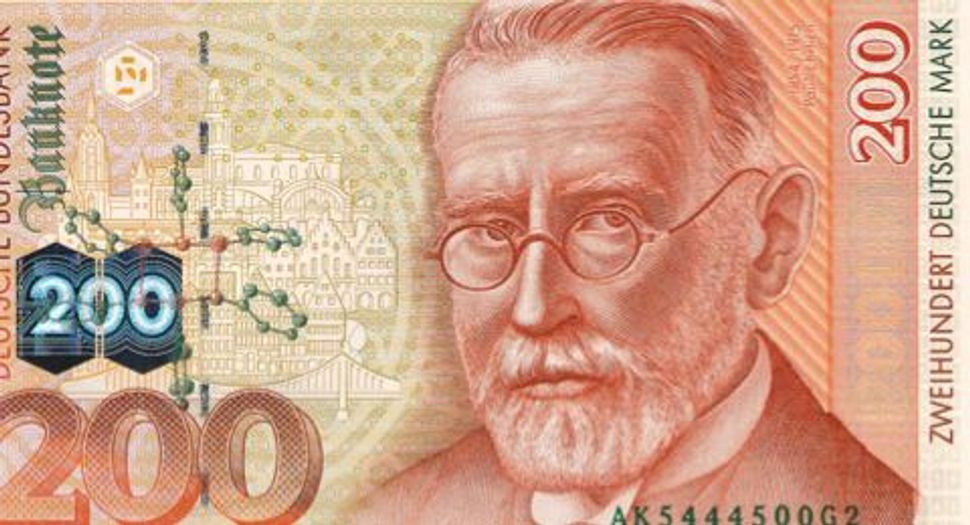 Homage to Ehrlich, co-winner of The Nobel Prize in Physiology or Medicine 1908 for immunological advances, including a treatment for syphilis and coining the term chemotherapy, was timely. By 1940, the Frankfurt street in which Ehrlich’s Institute had been located, previously Paul Ehrlichstrasse, had been renamed by the Nazis because Ehrlich was Jewish. Though, after the war, Ehrlich’s birthplace of Strehlen, Upper Silesia, would be apportioned to Polish authorities who renamed it Ehrlichstadt in his honor.

Such ups-and-downs were typical of Ehrlich’s life, explains a biography, “Paul Ehrlich: Life, Research, Economy, Networks” by Axel Hüntelmann of the University of Bielefeld, published earlier this year by Wallstein Verlag. For instance, Ehrlich’s Nobel Prize was delayed because Svante Arrhenius, a powerful Swedish scientist on the Nobel committee, was irked by the “markedly Jewish atmosphere” of Ehrlich’s Institute.

Bob Weintraub, director of the Libraries at Israel’s Sami Shamoom College of Engineering, Beersheva and Ashdod, further notes that in 1913, when Chaim Weizmann met with Baron Edmund de Rothschild to discuss plans for a proposed Hebrew University in Jerusalem, the baron insisted that Weizmann obtain the “support of some great Jewish scientists, Paul Ehrlich, for example.”

Through a Pinkus family relative, Weizmann did indeed get to meet Ehrlich and speak about his project, to which Ehrlich “exclaimed, ‘But why Jerusalem?’” Weizmann, a noted chemist as well as Israel’s first President, convinced Ehrlich to serve on the University Committee, and when Ehrlich died in 1915, he bequeathed money to The Nordau Institute, a forerunner of The Hebrew University.

Ehrlich’s demise was possibly due to excessive smoking; Hüntelmann cites a tobacconist’s bill stating that during one month in 1900, Ehrlich consumed 407 pricey cigars which cost twice the monthly pay of a lab assistant. In a 1918 ceremony atop Mount Scopus, when twelve foundation stones symbolizing the Tribes of Israel were laid for the University, Weizmann stated that the “sages of Babylon and Jerusalem, Maimonides and the Gaon of Wilna, the lens polisher of Amsterdam [Baruch Spinoza] and Karl Marx, Heinrich Heine and Paul Ehrlich, are some of the links in the long, unbroken chain of intellectual development.”