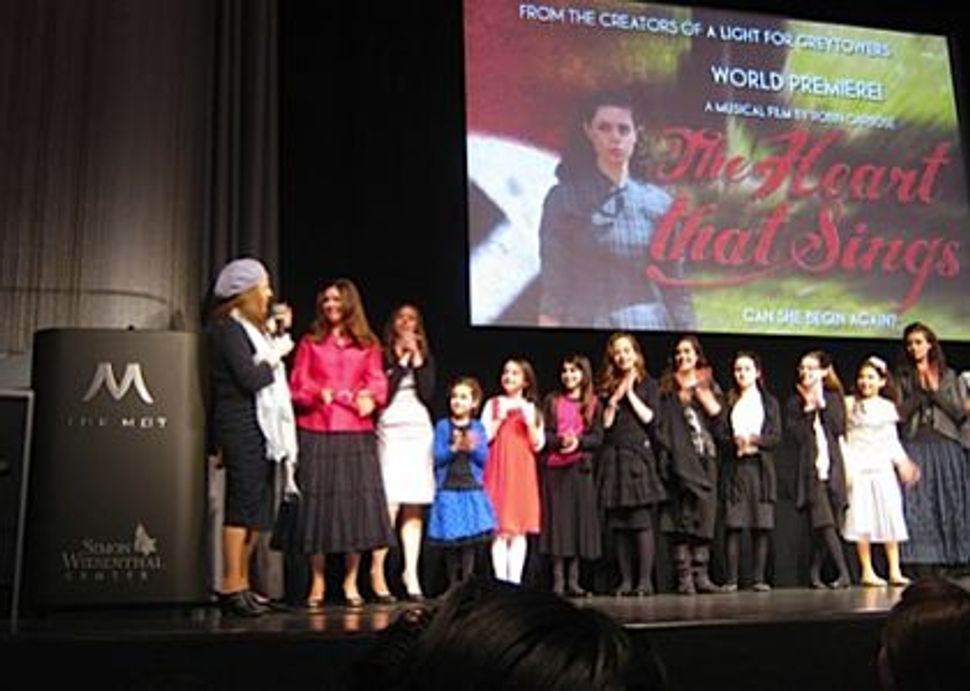 Orthodox director Robin Garbose is at it again. First she made history four years ago with a red carpet premiere of her movie musical “A Light for Greytowers” in Los Angeles. Modestly clad Orthodox girls and women filled Paramount Studio’s lot at the Sherry Lansing Theater, many attending a movie for the first time.

Last week, during Hanukkah, Garbose again proved that Jewish religious art can prevail with the women-only premiere of her second film, “The Heart that Sings,” at the Jerusalem Jewish Film Festival. It also screened over the holiday at venues across Israel to both religious and non-religious female crowds.

It is the first time the festival screened a Haredi film and invited only women, possibly insulting male moviegoers. Three years ago the festival withdrew “Greytowers” based on the women-only restriction, for fear of discriminating against male patrons. In response, Garbose held protest screenings at the Menachem Begin Heritage Center located across the street from the Jerusalem Cinematheque.

“We can’t advertise a public screening and not allow half our public to attend,” Daniella Tourgeman, the festival’s curator, said at the time.

After much dialogue and controversy, Tourgeman agreed to screen Garbose’s new film this year in keeping with the festival’s mission “to explore Jewish religious practice and promote cross-cultural understanding.”

Garbose wasn’t sure she’d pull it off, though. Days before the scheduled premiere, she sent emails urging her female fans to attend.

“The Jerusalem Jewish Film Festival has received some angry emails about the festival including a women-only film,” Garbose wrote. “We are concerned that men are going to protest and the only way to counter this is by filling the house with women!”

Although some men did attend the screening, Garbose did not send them away, since the responsibility to not view women’s performance is upon men. The discussion session that followed the premiere raised cultural differences, yet opened a dialogue for secular and Orthodox women in attendance.

“The power of art, especially the cinema, is that it can break through barriers and melt divisiveness by means of story and character, image or song,” Garbose wrote in an op-ed piece for the Jerusalem Post. “Instead of the Cinematheque screenings turning into a battleground for clashing ideologies as I had feared — the film is a musical that stars mostly Orthodox actresses who by heritage and choice do not sing or dance in the presence of men — it served as a catalyst for discussion and interaction, a forum for uplifted encounters and transformational exchanges of ideas.”

It’s been a whirlwind four years for Garbose who, before becoming Orthodox 21 years ago, began her career in theater, directing actors such as Laura Linney, Ricki Lake and Jason Alexander. She taught at Juilliard and NYU, directed 35 plays in L.A. and off-Broadway, and dabbled in Television, directing “Head of the Class” and then — as a Sabbath observant director — “America’s Most Wanted.”

While Garbose considers her films professional by Hollywood standards, they have challenged the entertainment industry by demonstrating that modestly dressed actresses and religious themes can entertain thousands of fans. Crowds turned up for the premiere of “Heart” across the U.S. last Passover and “Greytowers” screened to 50,000 women in the United States, Canada and Israel. Made on a budget — “Heart” cost $350,000 to produce — Garbose attained $18,000 in completion funds through Kickstarter.com.

Nearly all of Garbose’s young actresses are alumni of Kol Neshama Performing Arts Conservatory, which Garbose created 12 years ago in Los Angeles to provide professional artistic training and performance opportunities for Orthodox girls with a “burning desire to perform,” she said.

Two other secular venues, The Tel Aviv and Rosh Pina Cinametheques, also screened “The Heart that Sings” last week. Based on the short story “Miriam’s Lullaby” by Gershon Kranzler, the film is about a young Holocaust survivor named Miriam who lives in New York in the 1950s and spends a summer at a girl’s camp in the Catskills as drama director.