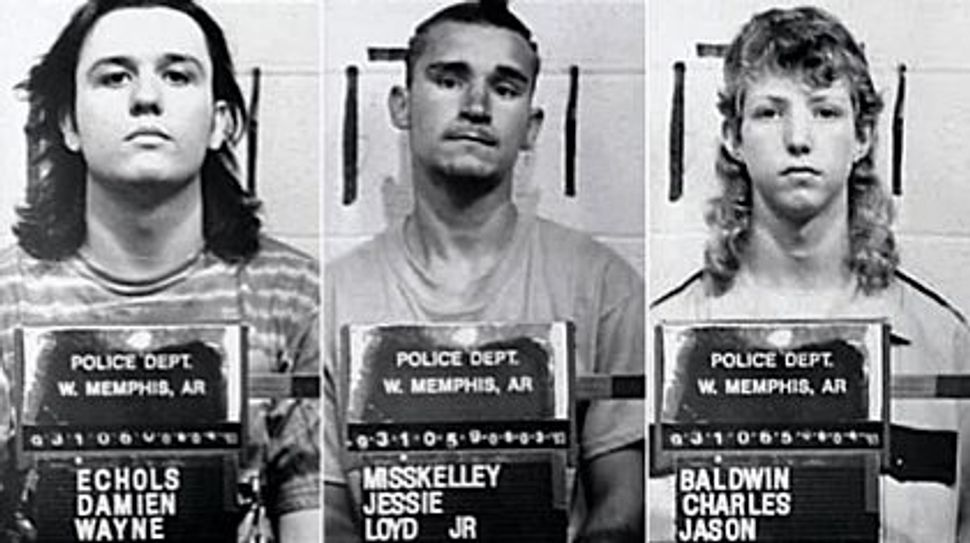 On January 12, HBO will broadcast “Paradise Lost 3: Purgatory.” For filmmakers Joe Berlinger and Bruce Sinofsky, this marks the end of an 18-year, three-movie odyssey that resulted in the freeing from prison of three apparently innocent young men.

In June 1993, high school students Damien Echols, Jason Baldwin and Jessie Misskelley — known as the West Memphis Three — were accused of the brutal murders and mutilations of three 8-year-old boys, supposedly as part of a satanic ceremony.

The day after their arrests, Sheila Nevins, president of HBO Documentary Films, sent Berlinger and Sinofsky a clipping about the detentions from The New York Times and asked them to fly out to West Memphis, Ark., to do some investigating for a potential documentary.

“The great irony of this is that we thought we were making a film about guilty teenagers,” Berlinger said. “We thought this was going to be an American version of the Bulger case.” (The February before the West Memphis Three murders, 2-year-old Jamie Bulger was abducted, tortured and murdered by two 10-year-old boys.)

Almost immediately after the pair’s arrival, Sinofsky began to have his suspicions. “We were given enough information to indicate [the case] wasn’t all it was supposed to be,” he said.

Most notably, the three prisoners seemed too small to have committed the acts they were accused of. Moreover, there was no blood splatter where the bodies were discovered, which should have raised doubts — but didn’t — about where the murders took place.

But the West Memphis Three were handy suspects. They were different. They listened to heavy metal music and wore Goth clothing. One had a below-average IQ.

Of course, it can be dangerous in the South to go against conventional wisdom. “There were threats,” Sinofsky said. “We were followed, especially at night; we don’t know by who.”

The three boys were eventually convicted: Two were sentenced to life in prison without the possibility of parole; one to death.

Three years later, in 1996, “Paradise Lost: The Child Murders at Robin Hood Hills” came out to critical acclaim. “We thought it was going to blow the lid off the case,” Berlinger recalled. “However, it never migrated from the entertainment page to the front page.”

The filmmakers felt compelled to help. So, with the support of Nevins and HBO, they returned to West Memphis to make a second film. “The first film was storytelling, the second was advocacy,” Berlinger said. That advocacy was something instilled in both filmmakers from a young age.

Berlinger was raised a in a Reform Jewish household in Chappaqua, N.Y. “I grew up with a keen sense of social justice. I was obsessed with the Holocaust. It actually led me to become a German major in college, to help me understand how such an event could happen. That, more than anything else, shaped me as a filmmaker who wants to give a voice to the disenfranchised.”

Sinofsky’s father was the executive director of the Boston chapter of Jewish Big Brothers, a not-for-profit for children and adults with disabilities. “My father was a counselor for prisoners, including Albert DeSalvo [the so-called Boston Strangler], and he always told us how important it was — a mitzvah — to help people,” Sinofsky said.

The pair’s follow-up film, 2000’s “Paradise Lost 2: Revelations,” mainly covered the flawed judicial process, in which the same judge who presided over the trial handled — and denied — all the appeals.

“Revelations” spurred such celebrities as Johnny Depp and Dixie Chicks’ singer Natalie Maines to speak up in support of the boys. But the real change in attitude began when regular folks — including the father of one of the victims — began to have doubts about the boys’ guilt.

By this time, additional DNA evidence had become available, and the state’s Supreme Court ordered an evidentiary hearing.

Before that could happen, the state caved. It agreed to free the boys if they accepted a rare Alford plea, proclaiming their innocence but pleading guilty. Though the plea meant the boys could not sue for wrongful imprisonment, it guaranteed their immediate releases (something a new trial would not have ensured).

“Paradise Lost 3: Purgatory,” which documents the boys’ long-awaited release, premiered at the New York and Toronto film festivals. But for Berlinger and Sinofsky, the outcome is bittersweet.

“I don’t blame them for taking [the plea],” Berlinger said. “But I am deeply troubled that the State of Arkansas did not have the courage to exonerate them because they did not want to be sued.”