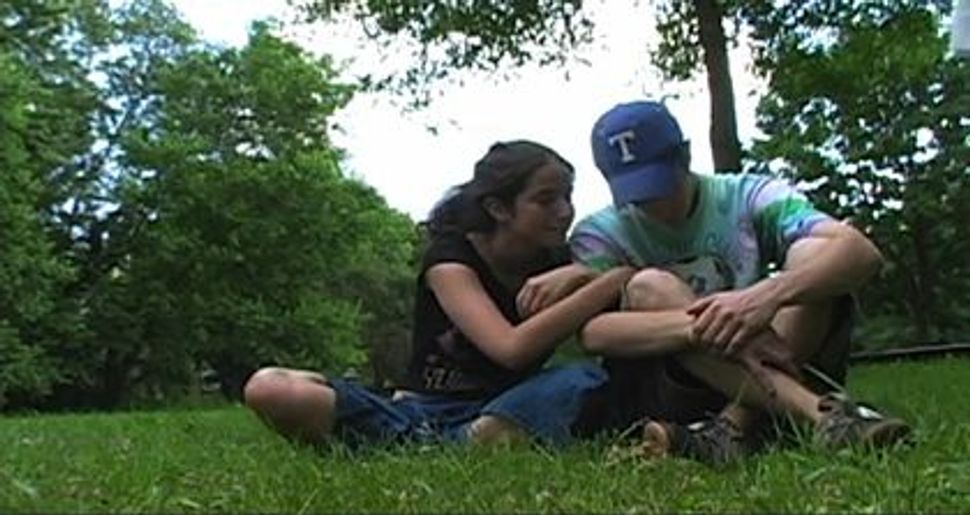 “Unorthodox,” a documentary film by Anna Wexler and Nadja Oertelt, is named both for its subjects — questioning and rebellious Orthodox youth — and for its own production process. The film follows three Orthodox teenagers as they become more religious during their “gap years” in Israeli yeshivot, but their stories are filtered through Wexler’s own narrative of leaving Modern Orthodoxy after high school. A personal project, “Unorthodox” has been seven years in the making and still isn’t done. It’s both Wexler and Oertelt’s first film; after years of funding difficulties, they’ve recently raised the $16,000 for an editor using Kickstarter, an online fundraising platform for creative projects.

Wexler grew up in New Jersey keeping Shabbat, wearing skirts knee-length or longer, and praying daily at her Orthodox day school. But after finding that her religious classes clashed with what she was learning in science and history, she began to doubt them. Over time, she gave up Shabbat and kashrut practices, transferred to a public high school, and found others like her.

Together with what Wexler calls a “group of rebellious Orthodox Jewish teenagers,” she “spent a lot of time on the streets in New York City and went pretty wild.” For a gap-year before starting MIT, Wexler went not to Israel but to Katmandu. But when she returned to America, she found that her friends had “flipped out” in Israel; they’d traded piercings and punk clothing for black hats and long skirts. “Unorthodox,” Wexler explained in an article on the fringe Hasidic blog Unpious, began as a question: Why had they become more religious?

Making the movie was not easy. In 2005, as full-time students at MIT, Wexler and Oertelt rented cars on weekends and drove to New Jersey to scout for talent. They sought out Modern Orthodox teens (at “Purim parties and high-school basketball games”) and asked them to participate. Most were wary or later backed out: “Some ultimately declined to be filmed,” Anna hypothesizes, “because on some level they knew that they’d go wild in the beginning and come back religious, so they didn’t want that first part of their year captured.” In the end, all three subjects were all indirectly tied to the filmmakers; Jake, for instance, is “the brother of the husband of a friend of a friend.”

The filmmakers gave each of their subjects a camera to record their experiences at yeshiva. Tzipi “has strong intellectual objections to Orthodox Judaism,” but she goes to Israel because she does not want to go directly to college. Chaim struggles in school and chooses yeshiva because his tuition is paid for; Jake, a “charismatic musician,” is ambivalent about Judaism, but wants to explore his religious convictions more thoroughly. Over the year, they all become more religious; one of the movie’s major themes is “why the same result occurs when kids come from different starting points.”

Filming itself created difficulties. In Israel, Wexler and Oertelt faced communal suspicion, in part because they were confused for another pair of female filmmakers, who were covering Americans at yeshivot for Israeli television. Later on, they couldn’t find the money for an editor; grants were “extraordinarily competitive.” After saving up last year, Wexler “literally holed up in the guest room at my dad’s house in New Jersey for two months straight, working until midnight nearly every day of the week” to shape 150 hours of footage into a rough cut of less than two hours.

Kickstarter, a website that allows artists to market their projects directly to individual donors, has provided the breakthrough. Of the roughly 250 “backers,” almost half have given less the fifty dollars ($25 gets you a free DVD of “Unorthodox”; $1000, a five-course dinner). Wexler and Oertelt were reluctant at first to use Kickstarter. “Because of the difficulties we encountered during production,” Wexler said, “all these years Nadja and I assumed that the Orthodox community would not be supportive of the film.” But they have discovered they were wrong: Typical backers’ names include Chaim, Gavi, Tova and Menachem.

Since meeting their goal, they are raising money for other costs. “When I say, on the Kickstarter video, that $16,000 is the bare minimum,” Wexler said, “I’m not exaggerating.” The two documentarians planned on taking out loans to pay for other fees and expenses. Now, in a surprising twist, a movie about the margins of Orthodox community is now being funded through that community itself.