Couture as Comedy and Conflict Resolution 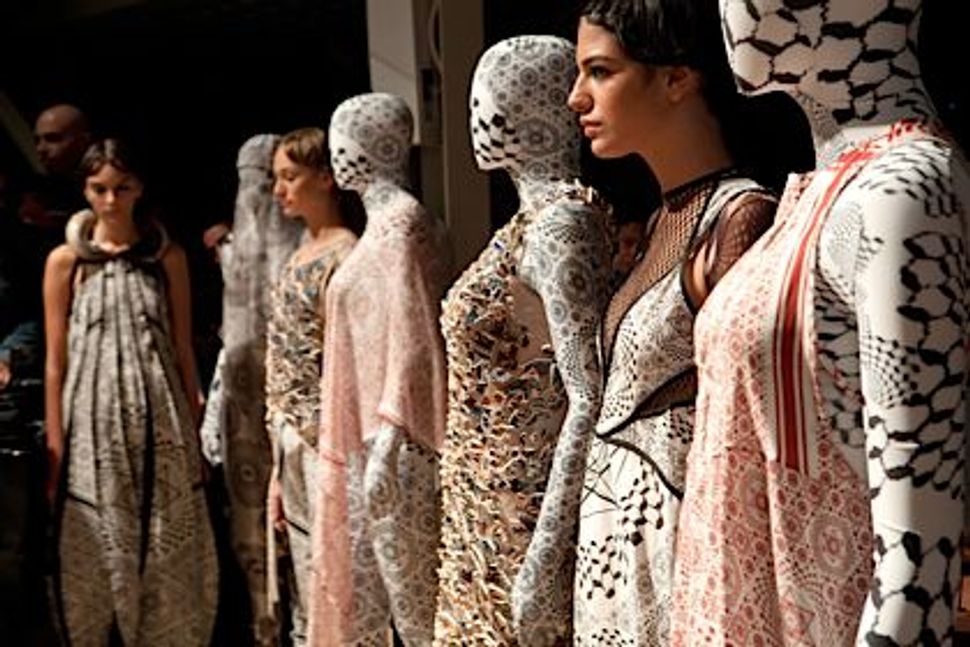 The iconography of fashion is perhaps not the most obvious tool with which to parse the complexities of the Middle East. Still, everything else seems to have failed; more to the point, style does shares a common vocabulary. So, why not?

“InSALAAM, InSHALOM,” a fashion collection and multimedia exhibit curated by the New York based fashion house threeASFOUR, is an ambitious exploration of the visual cues that establish a kinship between the diverse cultures of the eastern Mediterranean. That “visual vocabulary” is the starting point for a consideration of the less-obvious ties between Jewish and Arab cultures; “by presenting these different cultural talismans as a unity, the collection forms an aesthetic expression of sensitive coexistence.”

There’s no harm in observing that “InSALAAM, InSHALOM” states something of the obvious — at least up to a point. Despite the fractious relationship between the two tribes through the ages, it’s only reasonable to expect some cultural cross-pollination. To its credit, however, the exhibition — spread across four floors of Beit Ha’ir, the elegant mandate-era building in Tel Aviv that was the home of the city’s first mayors — doesn’t merely join the dots, but strives towards a meaningful statement about relations across the cultural and political divide.

Given their mixed background — an Israeli Jew, a Palestinian from Lebanon and a German of Russian descent — the members of threeASFOUR have the reference points to shape their intent. In the event, however, it is worthy but a bit predictable. The collection, which is all female, offers ethereal, layered garments, acknowledging the wearer’s basic femininity while giving a respectful nod to the concept of modesty (a cultural concept common to Jews and Arab muslims, of course); bold prints reference the dominant imagery of the region: the keffiyeh, the Star of David. It does have a certain aesthetic charm, but the collection itself doesn’t say anything new.

Staying with iconography, Shari Diamond’s series of pictures in the exhibit, “Re-Imagining Relations,” creates beguiling montages of synagogues and mosques, the architectural distinctions of the two places of worship blending seamlessly into one another. The series takes its inspiration from the actions of a group of Muslims who risked their lives during the Nazi occupation of France to rescue Jews: “I explore the potential of montage to highlight similarities, explore differences, and visualize a conversion of dichotomies into coexistence,” Diamond proposes.

Elsewhere, levity dominates; It is hard to tell, for instance, whether Jessica Sofia Mitriani intends her video short “Headpieces for Peace” to be taken at face value or not. On the balance, the collection of multi-cultural headwear, donned by the members of her outfit as “they travel for peace around the Middle East” is best considered as a diversion. But why not? Humor is lacking from the discourse in the Middle East, after all.

Oddly, it’s perhaps in this respect that the exhibition falls short: When all is said and done, it takes itself a bit too seriously. This is no bad thing, of course, and there is much to ponder in the intricate embroidery of Buthina Abu Milhem, for instance, or the universal message of Yoko Ono’s “Wish Tree.” But a bit of frivolity will never go amiss in this part of the world; if we start to take even fashion too seriously, what else do we have left?

Couture as Comedy and Conflict Resolution