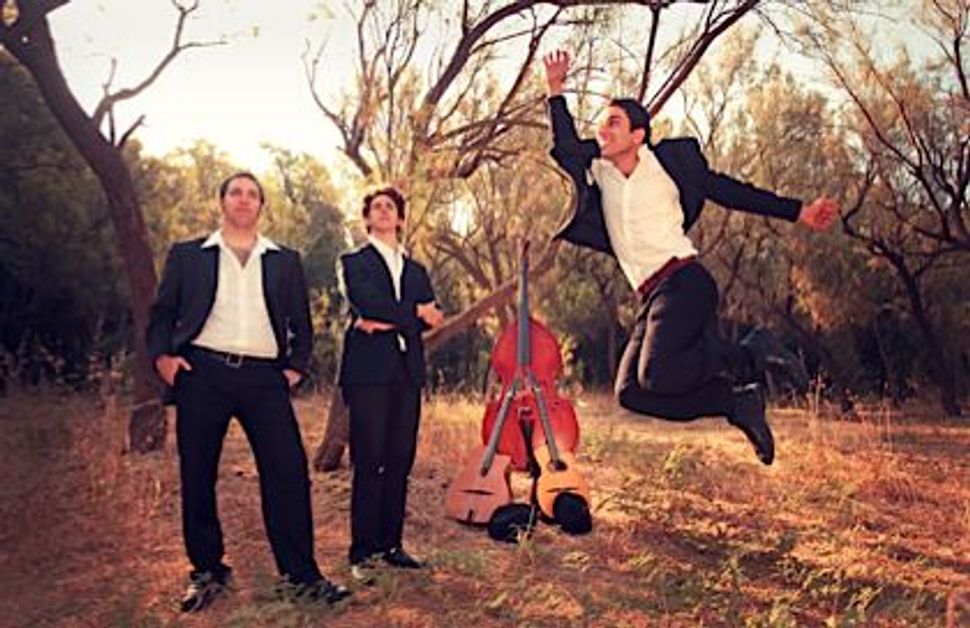 Finding my way through the cavern-like passages of Jaffa’s old city to the appropriately named Alleyway Theater (“Teatron Hasimta”) was an apt beginning to an evening of music with Israeli gypsy jazz trio Swing de Gitanes.

The trio opened with some of their original compositions, which were pleasant if not particularly stimulating. The first, “Autumn Sidewalk,” created the auditory illusion of someone lightly wandering back and forth on the pavement, with Hoter and Ben-Zvi’s guitars complimenting each other and Sagi’s double bass holding the center of the composition.

The band began to really show their style on the next number, “Israel Beat,” which had a faster tempo and more of a Middle Eastern flavor to it. Hoter’s guitar line seemed vaguely reminiscent of “Misirlou” — the most famous version of which provides the background for the opening of Quentin Tarantino’s “Pulp Fiction.”

The band really hit their groove mid-set around the song “Honeymoon,” which they recorded on their 2011 album “Muza.” Playing at frenetic speed, the musicians took on the appearance of wind-up dolls as they made the kind of fast-paced music that gets your blood boiling and just begs you to get up and dance.

Sagi, Hoter and Ben-Zvi finally came together in full synergy with a beautiful jazzed-up version of “Brazil,” an homage to the band’s spiritual and musical godfather, Django Reinhardt, that had the audience cheering and clapping before it was through.

Still, there were parts of the evening that made you thinking about the musical possibilities of a larger or more diverse set of instruments. Near the end of their performance the trio was joined by club manager Shlomi Goldenberg, whose saxophone added another dimension to the group. For the time being, however, the trio has no plans of becoming a quartet.

“We have an amazing dynamic as a trio and as musicians we love the intimacy it brings,” Ben-Zvi said during a telephone interview with The Arty Semite. “But we do occasionally ask other musicians to play with us for specific performances,” he added.

The audience last week certainly felt they had gotten the jazz fix they were looking for, bringing Swing de Gitanes back onstage with applause and demands for an encore.

The band ended with a jazz version of the Russian gypsy love ballad “Ochi Chernye” (“Dark Eyes”), finishing the night on a high note. Sagi, the virtuoso of the group, began the emotionally turbulent piece with some sparse tapping on his double bass before the entire trio jumped in with relish. During the piece the double bass repeated the haunting deep notes of the refrain, creating the impression of a Gypsy girl calling the two guitarists to follow her into unknown lands.

While Swing de Gitanes is already cooking some tasty sounds, they present an even stronger potential for future achievements.

“We have a small dream to make something valuable here that everyone will recognize. To bring European [gypsy jazz] performers to Israel,” the band members agreed. Hoter added: “From a Zionist perspective you could say we are adding something that doesn’t yet exist in Israel.”

Listen to the preview for ‘Muza’: