Friday Film: Nazis on the Moon 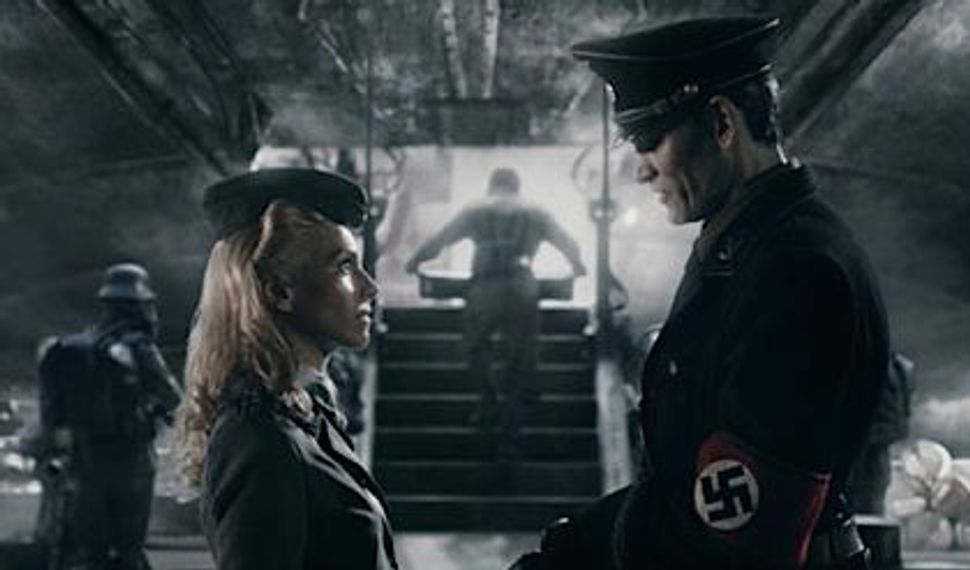 “Nazis on the moon” sounds like a punchline. But it’s actually the premise of the most talked-about feature at this year’s Berlin International Film Festival. The plot of Finnish entry “Iron Sky” revolves around “a group of Nazis who escape to the moon at the end of World War II to plan a new assault,” according to BBC News. “Added to the farce is a US President with more than a passing resemblance to former Alaska governor Sarah Palin, and a navy cruiser called the USS George W Bush.”

The most expensive film in Finnish history, “Iron Sky” has, according to BBCNews, “been hailed by some members of the international press as a sign that Germans are now at peace with their Nazi past.” But some Germans felt less comfortable. “Although I heard that audiences were laughing out loud, in my screening… it wasn’t like that,” Kerstin Sopke of the Associated Press told the BBC.

The film’s director, Timo Vuorensola, doesn’t see it that way either. “No, I absolutely think that’s not what’s it about,” he told The Arty Semite in an email.

I think that Germans have as a people moved away from the times, and have learned perhaps more than any other people in the world the horrors fascism brings, and know that history needs to be respected, but that the Germans living now (other than some very special cases) are not the ones who did the horrors. So they haven’t gotten ‘a peace with Nazi past,’ as BBC strangely words it, but they’ve understood that the current German youth did not do the bad things, thus making it possible to approach the subject with other emotions than the well-known ‘German guilt’. It’s time now to make sure it will never happen again.

The director also told the BBC the film is “a stupid joke.” Does Vuorensola think Nazis are inherently ridiculous? “What I said was that the idea about Nazis on the MOON is a stupid joke, and that I guess everyone may agree with,” he told The Arty Semite.

“I’ve never said that National Socialism, Nazi history and Nazis are a joke, they are the most horrendous part of European history ever. But what I believe is that one of the important weapons to fight Fascism, reign of fear, is to fight it with the one thing that diminishes fear — that’s to laugh,” he wrote.

By doing a comedy about Nazis I think we will be able to tell the same grave and serious message as the pathos movies that have been out there for ages, and get also the younger generation to realize how bad fascistic ideologies are, and — given that the economic situation of the world is what it is — we will unfortunately see more of the right wing extremists popping up with their opinions, spitting fear and anger, and we have to have a channel to talk to the youth, whether it’s a film, story or music, about the dangers of such thinking, because it is the basis from where the whole National Socialist movement was brought up from. Although we’ve learned, and I’m sure Germans have learned more than others, it still can happen around the world if we are not aware what’s happening around us.

In fact, says Vuorensola, viewers who see “Iron Sky” as a pointless “Nazis in space” parody are themselves missing the essence of the film. “Once people see the film they understand that the whole core of Iron Sky is about understanding one another, about humanity, about the fact that Nazism and all kind of Fascism leads to horrors and destruction, nothing else. It’s actually a really beautiful message behind it all.”

The film is due for release April 4 in Finland, and April 5 in Germany; distribution in countries including Germany, the United Kingdom, China, France, Japan and Taiwan has been secured, and negotiations for a U.S. deal are underway, the Los Angeles Times reported.

In the meantime, critical response has been mixed. The Independent’s Kaleem Aftab praised “Iron Sky” for “over-the-top storytelling at its riotous and enjoyable best.” But The Guardian’s Andrew Pulver called it “a giant damp squib” that was “not nearly as funny or cruel as its killer premise suggests.” And Time Out London agreed, calling it “a crude slapstick romp wholly lacking in charm, wit or excitement.”

Watch the trailer for ‘Iron Sky’:

Friday Film: Nazis on the Moon