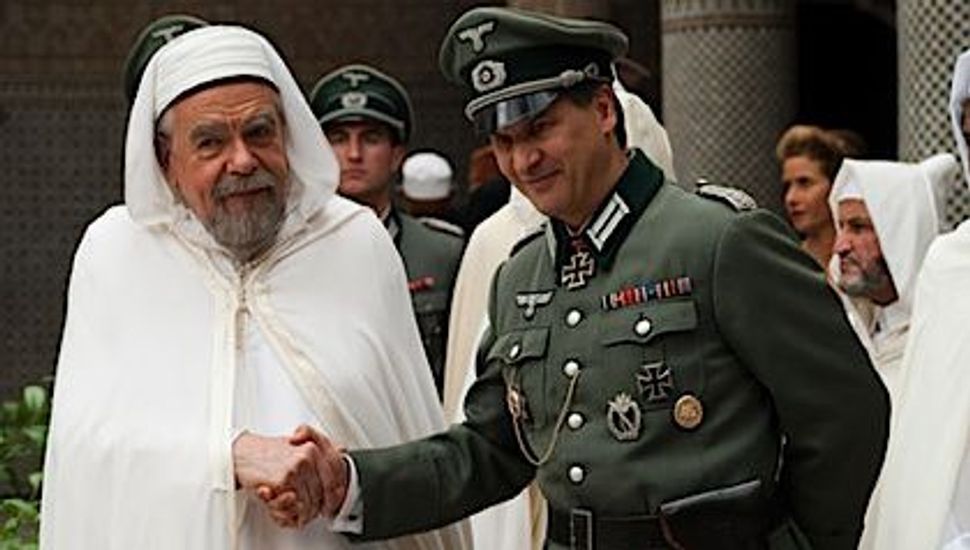 But Moroccan-born director Ismaël Ferroukhi and his co-screenwriter, Alain-Michel Blanc (with the historical advice of Benjamin Stora, fashioned instead an intimate tale of growing moral and political self-awareness against a backdrop that, at least for some, will prove surprising. Too few of us are familiar with instances of Jews saved by Muslims. Today’s Middle Eastern politics make such stories important, the better for Jews and Arabs to appreciate a shared past and, in the Sephardi context, shared cultures and communities that have effectively been banished from public remembrance.

The film, which opens this year’s New York Sephardic Film Festival on March 15 and theatrically March 16 at The Quad and Lincoln Plaza Cinemas, is inspired by historical events and persons. The composite (though fictionalized) character of Younes is picked up by the authorities for black marketeering. He is offered a deal if he will report on the activities in Paris’s Grand Mosque to the immigration police, who are controlled by French collaborationists. Not just a religious site, the grounds of the large mosque act as a community center, a social gathering place, a retreat from city bustle, and a place of cultural and linguistic succor.

We also learn that the Grand Mosque is under suspicion for harboring Resistance fighters and even providing certificates of Muslim identity to Jews who may be hiding on the premises. This last fact may come as a momentary surprise, until we remember the extent of cultural cross-pollination and even assimilation of Sephardi Jews in the North African countries of their birth, sharing Semitic features, language and local custom.

At the start, Younes is ignorant of the ends toward which his spying might lead; he is fixed on saving his own skin and protecting his cousin, Ali. He is pressed into giving increasingly detailed accounts of the activities at the Grand Mosque, where the rector, Si Kaddour Benghabrit, a wily eminence, conducts polite tours for Nazi authorities in apparent efforts to keep the mosque free from political suspicion.

It is only when Younes begins a friendship with Salim Halali, a popular Arabic-language singer who performs at the mosque — and a real figure who was a striking presence in Paris’s Arab cafes of the period — that Younes learns he is being asked to betray a man whose talents he admires, whose friendship he values, but whose background and private life are shadowy. Halali fashions himself as a ladies man, enlisting Younes in ogling Parisian women and drinking alcohol despite Islamic prohibitions. These last elements are early signals that Salim is not all that he seems. He is an Algerian Jew, and one harboring yet another secret.

In measured steps, the tranquil oasis of the mosque’s grounds is revealed to be a mirage: In its underground maze, Cousin Ali and other Algerian and Moroccan workers are engaged in union activism that has morphed into Nazi Resistance on behalf of France. Their political calculation further equates the French colonial yoke across North Africa with the Nazi Occupation of France. Younes is drawn to their heady idealism, and drawn as well to Benghabrit, whose calm exterior hides a conscience that must balance opposing forces: appeasing Occupation authorities while sheltering Jews under their noses; avoiding overt political positions while knowing a resistance group is organizing beneath the mosque’s sheltered grounds; advising Younes, an indifferent Muslim, toward a clearer moral path while wondering who this new young stranger actually is. Before the authorities, Benghabrit must feign innocence or ignorance; internally, he is a cunning elder who walks a tightrope without a net.

“Free Men” increases its hold on us as Younes’s character is revealed through small actions that ultimately demand immense moral choices. Tahir Rahim, best known from “A Prophet,” plays Younes with an intense stillness and intelligence; Younes is a shrewd if modestly educated observer, and it is through him that we experience both his own ethical dilemmas and those of the characters in his orbit. Michael Lonsdale, now an éminence grise of French cinema, brings a deliciously knowing, even humorous cunning to the character of Benghabrit — who was in fact the founder and rector of the Paris Grand Mosque. Finally, Mahmoud Shalaby, recently seen to great effect in “A Bottle in the Gaza Sea” in the New York Jewish Film Festival, is a Palestinian actor who lives in Israel and plays Salim Halali with a suitable mix of suavity, warmth, and bruised volatility.

While “Free Men” begins in mystery and suspicion, it shifts into sustained suspense and moral engagement. Ferroukhi has done his research, using fictional elements to give flesh to history. And in one last irony, the performing voice of Salim Halali is sung by a current popular Moroccan singer, Pinhas Cohen. Says Ferroukhi, “It really moves me since he represents today what Salim … was in his time: the embodiment of the link between two communities. His voice is particular: he sings in Arabic but his music contains references to Jewish music.”

Watch the trailer for ‘Free Men’: