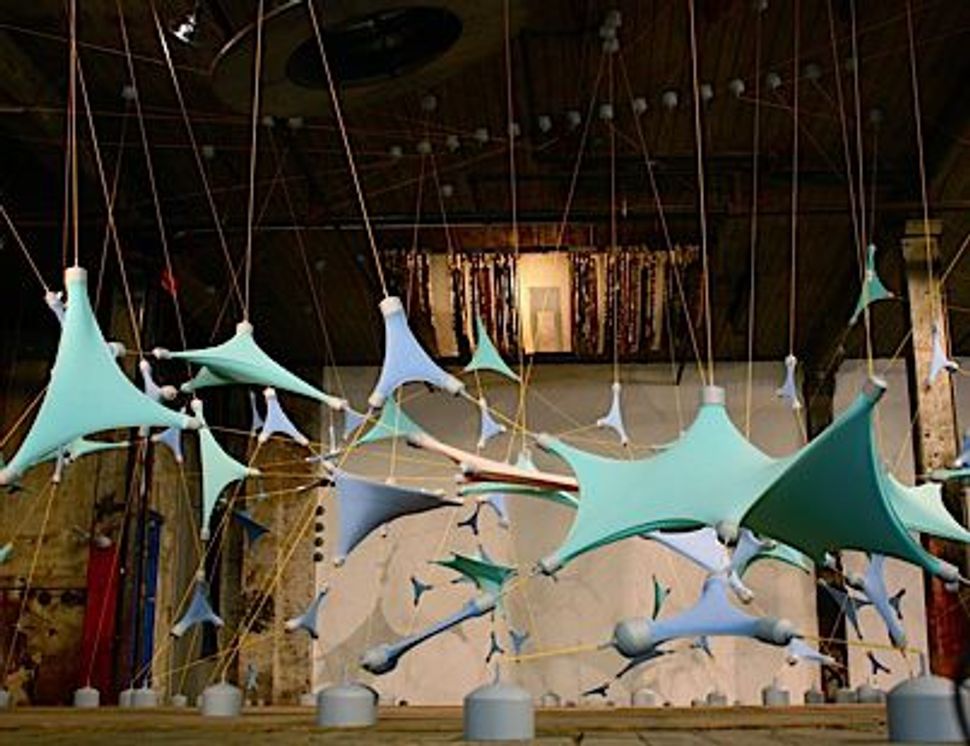 “Distorting (a messiah project, 13C),” an installation by artist R. Justin Stewart, is a technically ambitious representation of that most elusive of subjects: the Jewish concept of the Messiah.

On view until May 5 at the industrial-chic Invisible Dog Art Center in Brooklyn, the large-scale installation is composed of an elaborate web of blue, green and turquoise fleece pods interconnected by rope and plastic stretching from floor to ceiling. It invites the viewer to draw close and interact directly with the art, as well as with the artist’s thought process.

This second element is thanks to a technical twist: On each of the fleece pods, there is a QR (Quick Response) code which viewers are invited to scan using their smart phones, giving them access to a different piece of research Stewart undertook for the project, which draws on 13th-century Jewish scholarly sources.

Some QR codes reveal a specific Jewish thinker or writer, such as the philosopher Nahmanides, while others reveal a bite-sized idea or event connected to the concept of Messiah in Jewish history. One example from Raphael Patai’s “The Messiah Texts” reads, “After the redemption there will be a metaphorical banquet.”

One downside is that Stewart is expecting his viewers to be both smartphone owners and technically literate. Though armed with a smartphone, I was not QR-enabled, so had to download a QR app before I could get going. After that, I still found the QR codes frustratingly awkward to scan, and gave up on a good number of them after hovering my cell phone to no avail.

Once the QR codes were abandoned, the installation proved much more engaging. In the vast, industrial space of the gallery, which is housed in a converted belt factory, there is a dreamlike, mystical aspect to the pods suspended mid-air and pointing out in all directions. The web calls to mind the kabbalistic Tree of Life diagram which depicts the interconnectedness of the sephirot, or emanations of Godliness, in the universe.

“Distorting” is the first in a larger “Messiah Project” Stewart is currently working on. Raised as a Lutheran in Wisconsin, he became interested in the Messiah, and Jewish theology, after he married into a committed Jewish family and started reading up about Judaism. Expect more engaging, scholarly Messiah art from this artist.