All in the Dysfunctional Family 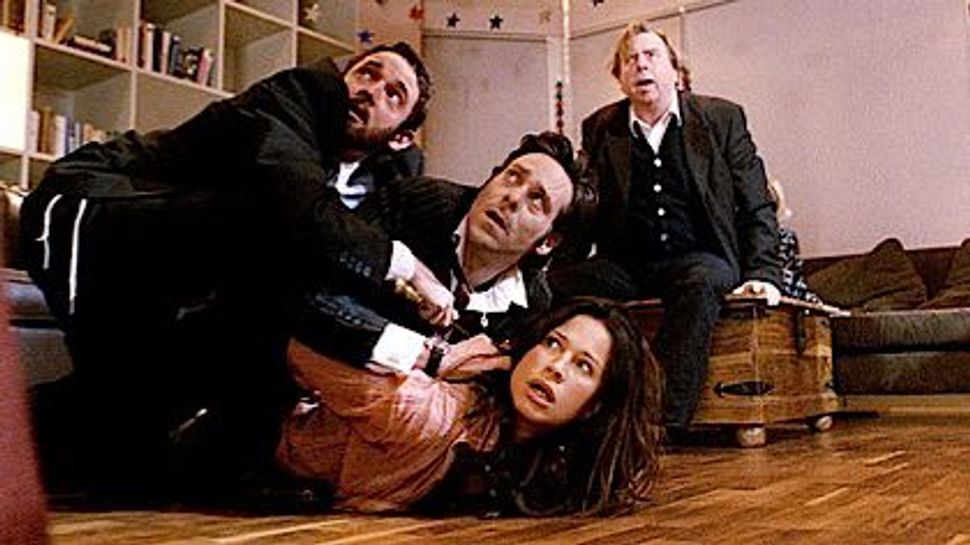 Too often, the foibles of Jewish family life are portrayed in negative, even mean-spirited ways. Happily, “Reuniting the Rubins,” a warm and heimish film, provides a humorous and occasionally moving antidote to that negativity.

The first full-length feature from religiously observant British writer-director Yoav Factor, “Rubins” suggests that familial love conquers all. That may or may not be true, but the film’s heart and kishkes are in the right place.

Lenny Rubins (Timothy Sprall) is a retired attorney about to embark on a long-anticipated round-the-world cruise. But just before the ship leaves port, he receives word that his mother suffered a heart attack.

Granny Rubin (Honor Blackman of Pussy Galore fame), a Holocaust survivor, beseeches Lenny to postpone his trip and gather his brood for a Passover Seder. Lenny resists. He has a distant relationship with his four children. In fact, they don’t get along with him or with each other.

But a mother is persuasive. Living in a retirement home, she’s seen “destroyed families who only come together when it’s too late. I don’t want my family reunited over my dead body… Before I die I want to see the family together at the Seder table one last time.”

So what’s a guilt-ridden Jewish son to do? Especially since his mother cashed in her savings to re-purchase the home where he and his kids grew up? He contacts his progeny and begs them to return for the holidays.

The children form a hodgepodge of Jewish stereotypes. There is the evil capitalist Danny (James Callis), who made his fortune on the backs of the disadvantaged; the liberal Andie (Rhona Mitra), off in Africa helping the impoverished; the uber-Jew and black hatter, Yona (Hugh O’Conor); and the convert, a Buddhist holy man no less, Clarity (Asier Newman).

Unfortunately, lacking a backstory — why they became estranged from their dad, how one home could produce four such disparate individuals — the children come across more as caricatures than full-blooded characters. This slows down a film that otherwise has its share of good moments on its circuitous (and often unexpected) road to a predictably happy ending.

Some of the best such moments belong to Blackman, who points to her camp tattoo and suggests that there was a good reason for it — “So I never forget my pin number.” But then in a well-timed and well-played reversal she notes that she lost sisters who were “just two numbers away.”

Several off-beat characters help enliven the proceedings: a non-Jewish nurse who has difficulty with Jewish guttural pronunciations; a witch doctor who bedazzles tourists and tells Lenny he went to Oxford with his daughter; and Nick, Danny’s ambitious assistant.

“Reuniting the Rubins” isn’t a great film, but it is a portent of good things to come from Yoav Factor. And it certainly won’t disappoint the right audience.

Watch the trailer for ‘Reuniting the Rubins’:

All in the Dysfunctional Family