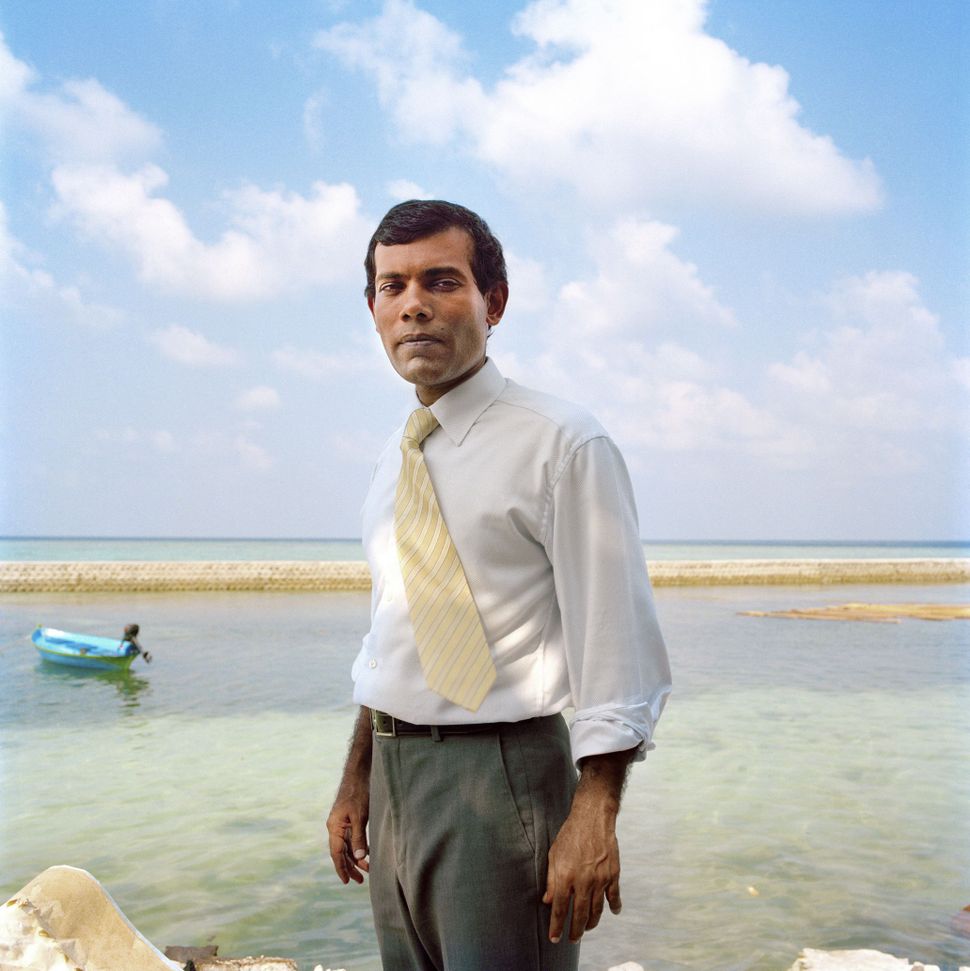 Watching the documentary “The Island President” is like watching a political thriller — only its story is not fictional and the cast is not made up of movie stars. Most important, the stakes are very real. In fact, they are so high that the existence of an entire country hangs in the balance.

The underdog hero of this drama is 41-year-old Mohamed Nasheed, the first democratically elected leader of the Maldives, a Sunni Muslim nation of 1200 islands in the Indian Ocean. This would have been enough to intrigue San Francisco-based filmmaker Jon Shenk, but there was more.

During his time in office Nasheed, a former political prisoner and exile, not only promoted democratic and transparent governance in his country, but also fought for its very survival. Armed with scientific evidence that his barely-above-sea-level country is sinking into the ocean, he worked tirelessly and creatively to convince the international community to take action to reverse climate change.

“Nasheed shows that climate change is a human rights issue,” Shenk told The Arty Semite. “He was just continuing his civil rights work right into the climate problem in a seamless way. He was putting a human face on the climate issue.”

In the film’s portrayal Nasheed himself becomes the face of the fight against climate change. Highly educated, well spoken, pragmatic and charismatic, he uses all of his persuasive abilities to bring big powers on board with his plan to reduce carbon emissions. He employs his media savvy to stage publicity stunts like the first ever underwater cabinet meeting and a public service announcement filmed while he stands waist-deep in the ocean in his good suit. Nasheed holds his own in meetings with the Indian government and with European officials. He’s treated like a rock star by protesters in Copenhagen, where he delivers an impassioned speech to the assembly, which ends up salvaging an international agreement at the last moment.

“The Island President” reflects how closely Shenk followed Nasheed during the months leading up to his trip to the Copenhagen Climate Summit in 2009. Shenk, who shot most of the footage himself with a shoulder-mounted camera, said the president did not at first fully understand the observational filmmaking technique. But the intimate portrait that ultimately emerged makes it is clear that the politically astute Nasheed eventually grasped the value of having the viewer right there with him, whether he was dressing for meetings, breaking the Ramadan fast with his wife, or engaging in backroom horse trading with diplomats from other emerging nations.

Shenk, who said he felt safe as a Jew working in the Maldives, did express some concern about the small fundamentalist Islamic faction there. “My being Jewish did come up, but Nasheed and his colleagues, all of whom are educated and enlightened, didn’t think twice about it.”

The situation would likely be different today, though. In February 2012, Nasheed resigned the presidency under threat of violence in a coup d’etat staged by security forces loyal to former dictator Maumoon Abdul Gayoom.

As Shenk and his producers, including his wife Bonni Cohen, have geared up for the theatrical release of “The Island President” on March 28 at the Film Forum in New York, they have kept in touch with Nasheed, who attended the film’s premiere at the Toronto International Film Festival in September 2011 with his family and entourage.

“He sounded good, upbeat,” Shenk said of Nasheed, based on their last phone conversation. “He is far from giving up.” And he continues to be an inspiration to the filmmaker. “I’m always taken aback when people say there is nothing we can do about climate change. I’m a realist, but I have been impacted and inspired by being around Nasheed,” Shenk said.

Many more people will be inspired, after seeing “The Island President.”

Watch the trailer for ‘The Island President’: