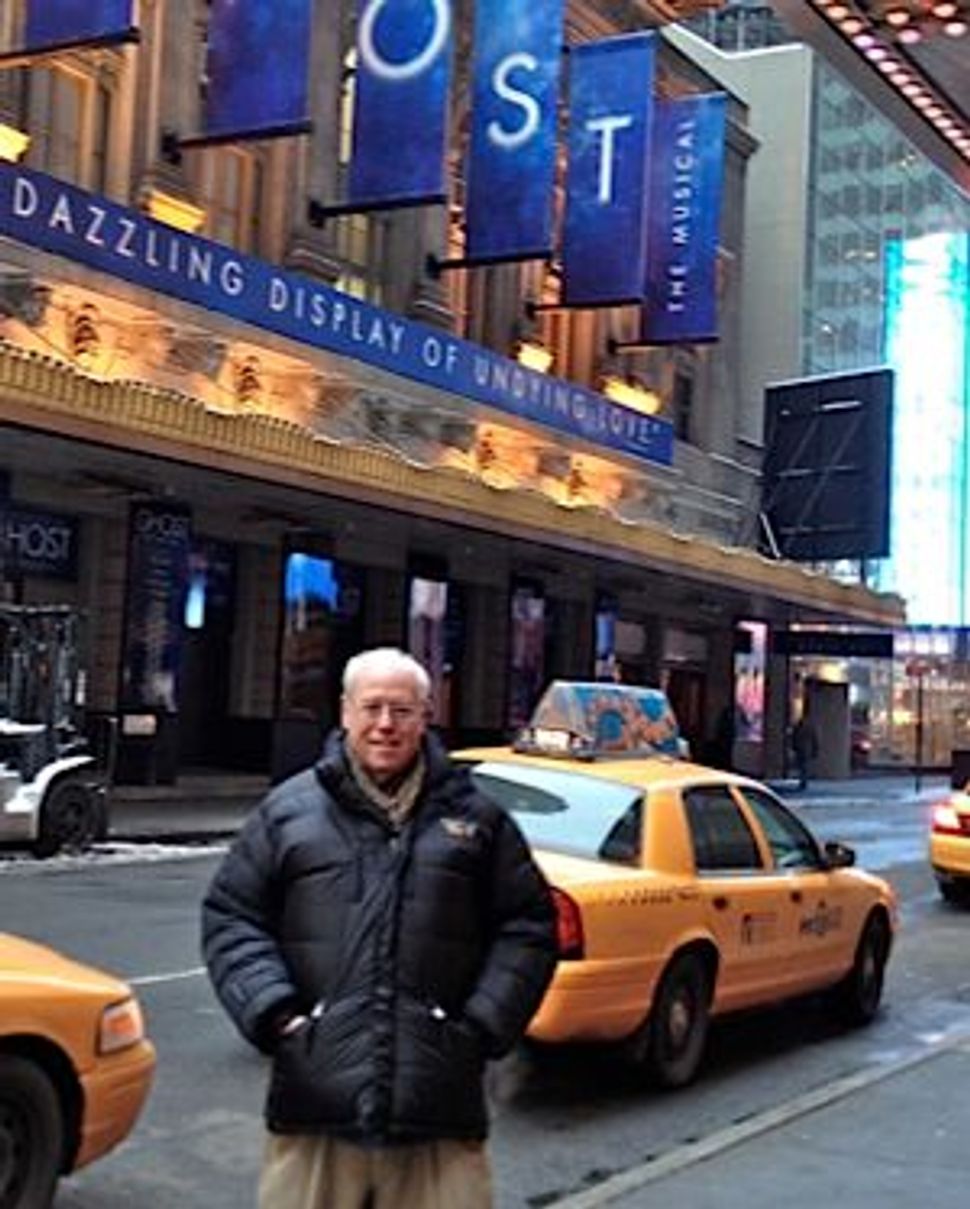 Screenwriter Bruce Joel Rubin is standing in the back of the Lunt-Fontanne Theater just off Broadway watching his latest baby, “Ghost: The Musical,” unfold. Rubin won an Academy Award for his screenplay about, well, a ghost. He never imagined it as a musical. Yet here it is. Already a smash hit in London (tickets have just gone on sale through 2013), and productions are now in the works in the Netherlands and Melbourne. And, of course, in New York, where it opens April 23. Rubin spoke with The Arty Semite about how Hamlet’s father inspired him, how the ghost of a deceased meditating instructor got him his first job, and why he probably won’t write another film.

Curt Schleier: I understand Hamlet’s father had something to do with the inspiration for “Ghost,” the movie?

Bruce Joel Rubin: It had more to do with me as a person who wants to tell stories. I wanted to tell a story of what it means to be a ghost, but from the side of the ghost. I found that very compelling. What is it like to be dead, but still here? Death has different meanings in different cultures. I was looking for a way to frame the story and one day I was watching Hamlet, where the ghost of Hamlet’s father appears and says, “avenge my death.” That was a very important moment for Hamlet and a very important moment for me.

No, of course not. I envisioned it as a movie. I was a screenwriter, and it became surprisingly successful. More successful than I ever imagined it would be. Some even consider it a classic, which makes me happy, though I don’t know that it’s true. But it became a brand. [The idea of] taking a brand and turning it into a musical, I kept saying no, there was no way to win in that situation. I was approached by a number of people and I kept turning it down. Finally, [two producers] visited me in my home in upstate New York. We talked so long that they missed their train back and had to stay the night. They said “Ghost” was a Technicolor movie, and I could write something with more shades of grey. More important, we weren’t remaking the movie; we were just telling a story.

Ironically, it may have been a ghost who got you into screenwriting.

Essentially, when I arrived in Hollywood I didn’t have much money at all. We went on a wing and a prayer and I was hoping I would get a job. The first job I was offered [in 1983] was writing a Wes Craven movie, “Deadly Friend.” But I had integrity and didn’t want my first film to be a horror movie. I’m a meditator and was meditating about it when I head the voice of my dead meditation teacher say, “Schmuck, there is more integrity in providing for your family.” He said: “Get up from your meditating, go to the phone, call the producer and tell him you want the job.” The next thing I was working on the movie and it was one of the pleasures of my early career. My sons were on the set and we were having so much fun.

On the subject of your sons, that script helped pay for one of their bar mitzvahs.

My son was going to have the first peanut butter and jelly bar mitzvah, but now we were able to have chicken and liver and a real bar mitzvah. To top it all off [in about 1985] the writers went on strike I was impoverished. I was down to my last $400 and we were in bad straits. That’s when I got a residual check for the movie. I thought it was for $3,600. My wife said to look at it again. It was for $36,000. So Rudy’s words to me about the integrity of providing for your family in fact saved our lives.

Yet, you’ve said you’re not likely to write another screenplay. Why is that?

Two things. Hollywood has changed for me. I’m not someone who can write “Transformers 12.” While I can do it on the level of skills, I don’t have the interest. Why would I want to? I’ve had my time there. It’s hard to write something you’re passionate about and have someone else change your vision. [When you write a screenplay it’s yours] only while you’re writing it. The minute it gets into the hands of [studio] executives, there are changes made. Then it goes to the director who makes changes and then it goes to the actors who make changes and then more changes are made on the set. In most cases, the writer doesn’t even get to the set. You write material. You put your soul into it. And then you lose it. It’s like giving birth to a baby and giving it up for adoption.

A lot of your work has a spiritual level to it. How were you brought up?

It was a traditional Reform upbringing, I would say. Judaism had an impact on me when I was very young. I would say the Shema and prayers every evening. In the end I identified more with the spiritual than religious aspects of Judaism, and every religion. I hitchhiked around the world and spent a lot of time in ashrams, and tried to find the commonality, the spiritual connection all religions share. Ritual is uninteresting to me. For me, the underlying content, the journey into wisdom if you will, has dominated my life. I’ve spent my writing career trying to express a few of those ideas to a large audience. Every movie is a sentence, and if you have a career you write a paragraph.