Kunis and Kutcher: Could It Be? 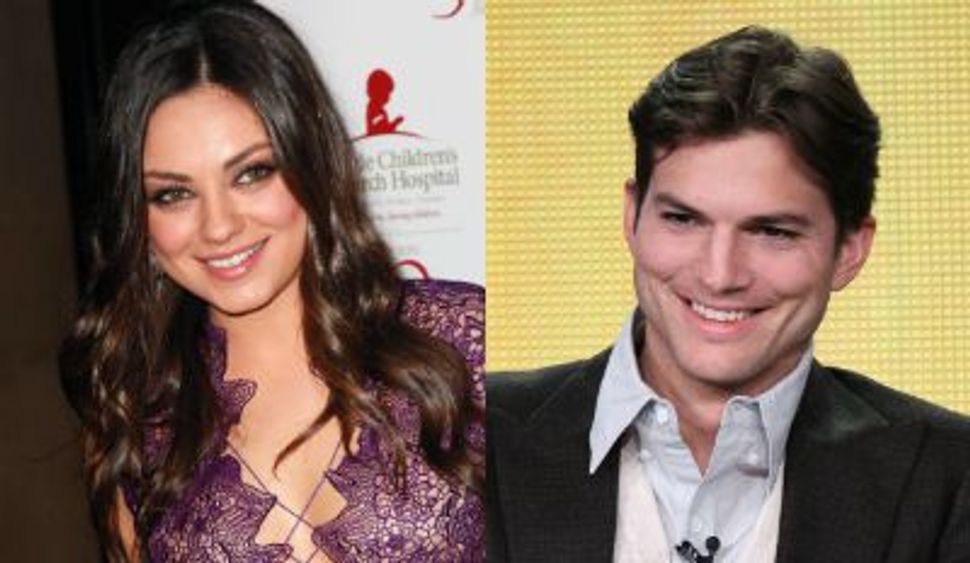 Have you been starved for news about Jewish starlet Mila Kunis since her hammy evil-ballerina turn in 2010’s Black Swan?

People.com has come to the rescue with a report today that the Ukraine-born Kunis “enjoyed some serious alone time together” last week with Ashton Kutcher, the dashing “Two and a Half Men” star and former Mr. Demi Moore.

We know — you want details. People is happy to oblige. “The longtime friends and ‘That ’70s Show’ costars went on a three-day getaway to the coastal town of Carpinteria, Calif., just south of Santa Barbara. While away, Kutcher, 34, and Kunis, 28, dined on sushi, shopped for fruit and flowers and spent plenty of time in private,” People alleges.

There’s more: People.com reported that while driving back together, “Kutcher looked on while Kunis bought sunflowers and blueberries at a roadside fruit stand.”

Early last week, Kunis’s rep denied rumors that the pair were an item after they were spotted going to dinner with friends and reportedly shopping for furniture.

But “a Kutcher source” told People.com that the actor has long held a torch for Kunis. “He was so in love with her for a while when they worked together,” said the source. “He thought she was a goddess, was always talking about how beautiful she is. But she was with Macaulay [Culkin] for a lot of that time and also just generally gave off a not interested vibe.”

Last year, Israeli native Natalie Portman revealed to USA Today that Kutcher, her love-interest in “No Strings Attached” was “her primary teacher of all things Jewish.”

The Catholic-raised Kutcher “has taught me more about Judaism than I think I have ever learned from anyone else,” Portman said at the time. “Ashton’s a very serious student of Kabbalah and Judaism. He knows a lot. When we had the funeral scene [in the movie], that was a Jewish funeral. He was able to read all the Hebrew.”

Kunis and Kutcher: Could It Be?