David vs. Goliath in Brooklyn 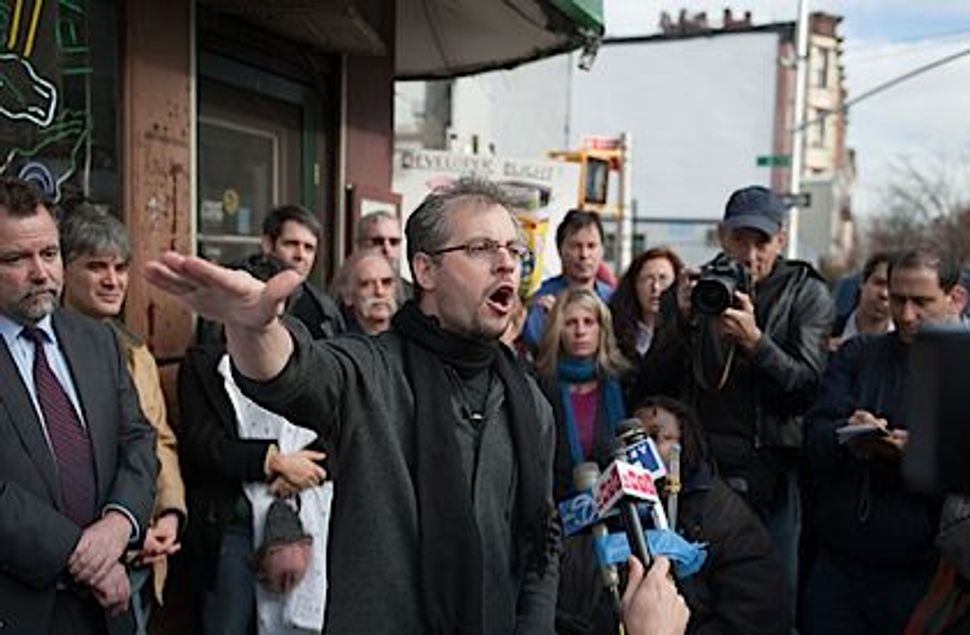 “Our city grows so fast that there is some danger of the events and incidents of more than ten years gone being totally forgotten.” So wrote Walt Whitman in the early 1860s, describing the development of Brooklyn. But could the poet and long-time Brooklyn resident have foreseen the battles waged between land developers and neighborhood residents nearly 150 years later?

Michael Galinsky and Suki Hawley’s film, “Battle for Brooklyn,” screening May 1 at Brooklyn Skill Share, chronicles the struggle of one borough resident in his attempts to thwart a huge land development project, which will facilitate the relocation the New Jersey Nets to Brooklyn next season. Anguish and mixed emotions persist on both sides of this battle, highlighting the complex flavor of Brooklyn’s sprawling and diverse neighborhoods.

“Battle for Brooklyn” paints a critical portrait of real estate developer Bruce Ratner’s Atlantic Yards Project, a commercial and residential development of 16 high-rise buildings under construction in Prospect Heights, near Downtown Brooklyn and Fort Greene. The centerpiece of the project is the Barclays Center, which will serve as the new home of the Nets. Ratner is the current minority owner of the Nets, and as Chairman and CEO of Forest City Ratner Companies, he has been at the forefront of this project since it was proposed in 2003.

Galinsky and Hawley’s film depicts the Atlantic Yards Project as indifferent to the concerns of Brooklyn residents. Despite strong backing by the city, including by Mayor Bloomberg and Brooklyn Borough President Marty Markowitz, the project faces opposition from locals who feel as though the city has been insensitive to the needs of their communities. The most vocal of these is activist Daniel Goldstein, who became the catalyst of “Develop Don’t Destroy Brooklyn,” an effort to “advocate for real alternatives to Atlantic Yards.”

Galinsky met with Goldstein during the nascent days of his activism against the Atlantic Yards Project. “We read the story about the project in The New York Times and thought it sounded like a press release,” Galinsky recalled. After he came into contact with Prospect Heights community activist Pattie Hagan, she encouraged him to meet Goldstein. It turned out that they already knew each other. “As such, we already had a certain level of trust that allowed us to get very involved with his process,” Galinsky said.

Like the Atlantic Yards Project itself, the documentary has become its own source of controversy. “’Battle for Brooklyn’ grabs the narrative back from the developer and away from ‘the media’ and tells the story that neither the developer nor the media ever wanted to tell. This makes ‘Battle for Brooklyn’ a very dangerous film for the power elite who run this city and so many others,” Goldstein said.

Not surprisingly, Brooklyn Borough President Markowitz has a different point of view. “The documentary is pure propaganda and produced by filmmakers who have an agenda and are obviously opposed to the project,” he told the Forward. “No other single decision could have had as significant an impact on economic development in this area. The Nets will be the first professional sports team in Brooklyn since our beloved Dodgers left in 1957.”

Goldstein, who now lives a few blocks away from his former residence in Brooklyn, has not given up on his cause. If “Battle for Brooklyn” can be likened to a biblical morality tale you might say it’s a case of David versus Goliath — even if, in this case, Goliath has won.

Watch the trailer for ‘Battle for Brooklyn’:

David vs. Goliath in Brooklyn