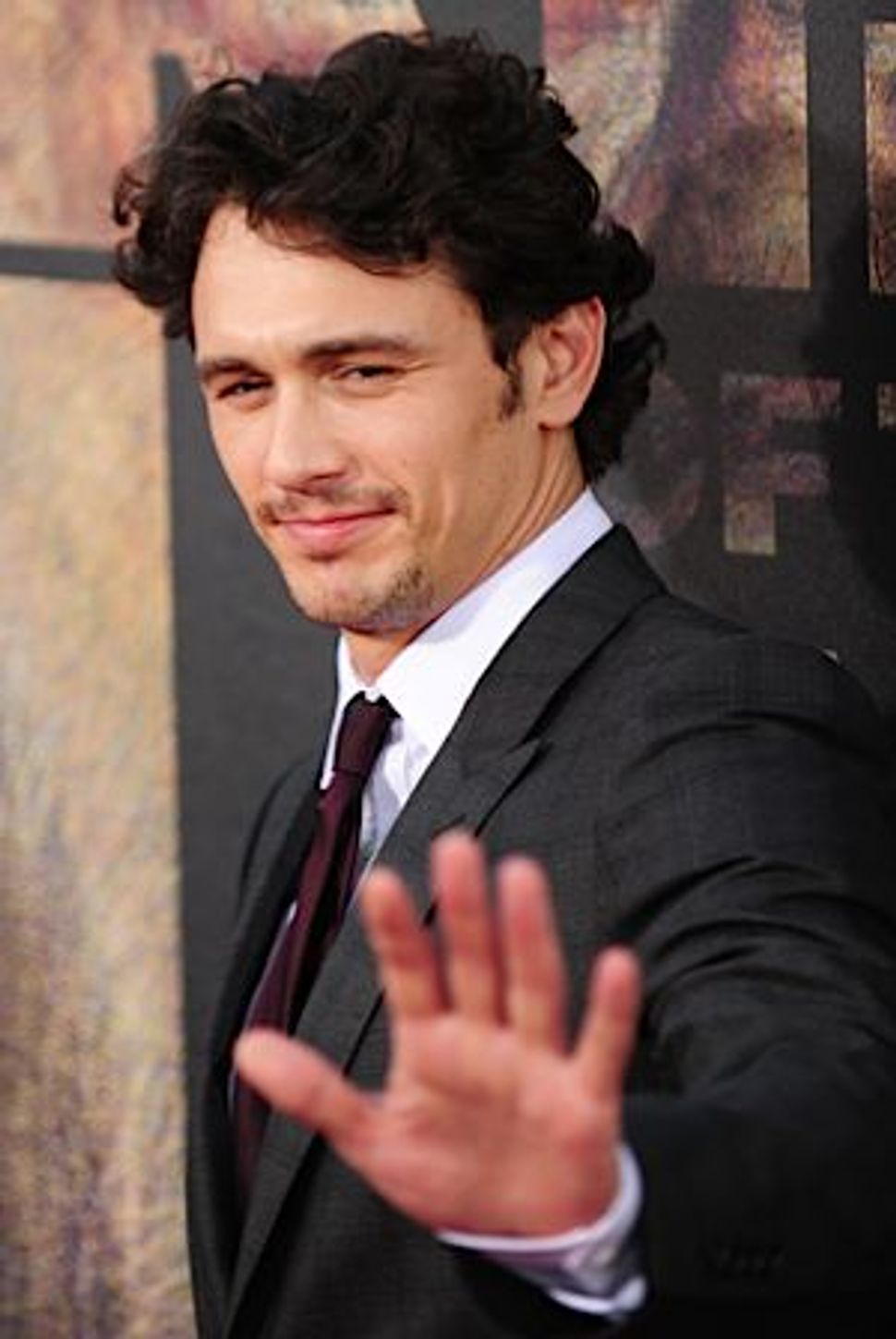 Actor James Franco was named by Salon.com as one of “10 men who might just inspire the rebirth of Jewish male cool.” Though of Russian Jewish heritage on his mother’s side, Franco never had a Bar Mitzvah. “I wish I had though,” he said wistfully. He played a Jewish drug dealer in Pineapple Express and was accused of appearing stoned when he hosted the 83rd Academy Awards. Nominated as Best Actor for his lead role in “127 Hours,” Franco is also known for his role in “Milk” as Sean Penn’s lover, as Allen Ginsberg in “Howl,” and for his latest movie, “The Broken Tower,” in which he plays Hart Crane, an American homosexual alcoholic poet who committed suicide by jumping off a ship at age 32.

“The Broken Tower” is Franco’s New York University film school thesis project, which he wrote, directed and stars in. Previously, Franco earned two masters in writing, from Columbia University and Brooklyn College. Voted Sexiest Man Alive by People magazine, Franco has said he never relaxes and doesn’t even like to sleep because “there’s too much to do.” That seemed apparent when he showed up disheveled for his recent interview with The Arty Semite.

Dorri Olds: Why did you want to make a movie about Hart Crane?

James Franco: I find that one of the keys to filmmaking is to have some element of the movie that I respect greatly — whether that’s an actor, a book, or a subject. In this case it’s the life and poetry of Hart Crane.

Why is the movie shot in black and white, with a handheld camera?

Black and white is to give a feeling for the time — the 1920s. By contrast, shooting handheld makes it more like a documentary. One of the things I find with period films is the emphasis on production design — they want to present the earlier period in all of its glory, something that can suck the life out of the story. Shooting handheld was a way to work against that. The style of the film is partly influenced by the financial restraints we had.

Did you find it constricting to work on a low-budget student film?

No. I’ve been acting professionally for 15 years and been in all kinds of movies. The biggest budgeted movies, those that broke box office records, movies that have won Oscars, had the highest critical acclaim and so I already know what all of those things feel like.

How have your colleagues reacted to your directorial choices?

All through the development process people said to me, “Maybe you should give it more of a conventional arc or more conventional scenes.” And I thought, no. I tried to be as true to Crane as I could. That’s something Sean Penn taught me. When you go into a project you never know how it’s going to do at the box office. I know this is not going to be like “Spiderman,” but whatever the response is, if you know that your intentions had integrity then you fulfilled your role as an artist or actor or director.

What draws you to the subject of homosexuality?

Crane was very comfortable with his sexuality at a time when that was unusual. It was threatening to his straight poet friends but he wasn’t shy about it. The only people he kept it from were his parents because he thought he wouldn’t inherit his father’s millions if they knew he was gay. I thought if I put these explicit sex scenes in, it would give a sense of how Crane came off to his friends — but not just in a suggestive, clean way, afraid to offend movie audiences. The sex scenes are surprising and in juxtaposition with the slower-paced and more poetic scenes. I wanted to show a balance of Crane’s personality.

Former NYU professor José Angel Santana claimed that he was fired because he’d given you a D. Do you have any comments about that controversy?

I think it’s silly. The press should be ashamed. He wasn’t fired. He was asked not to come back after three years because they didn’t think he was a good teacher. I’d been in eight years of acting classes and didn’t feel like I needed to waste my time with a bad teacher. He went to the New York Post and used my name to get attention. It was a nice hook for the press, yet completely false. He’s not going to win the lawsuit and he’s not going to be hired at another institution.

What are you working on next?

I directed a movie based on a book by Cormack McCarthy called “Child of God.” It’s slated for release in 2013.

Do you have a personal style, an icon? Somebody that you admire?

Bob Dylan has good style [tussles his hair in Dylan-esque fashion and grins].

Watch the trailer for ‘The Broken Tower’: