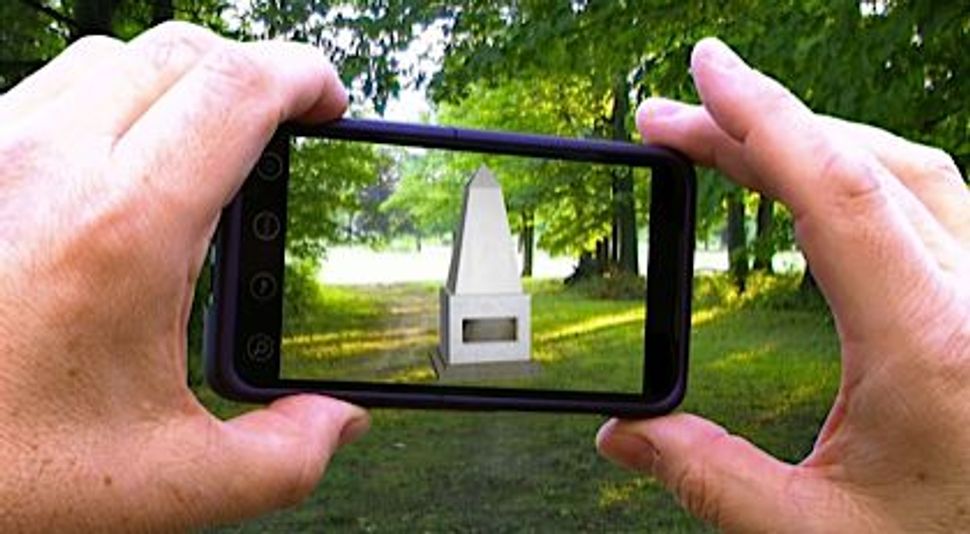 When Mordecai Manuel Noah, the most influential Jew in the United States in the early 19th-century, tried to establish a refuge for Jews called “Ararat” on Grand Island, New York, he failed miserably. Efforts to establish the colony in 1825 went no further than a big kick-off event in Buffalo, which was followed by a resounding lack of interest and support by American and international Jews. Now, 187 years later, three art professors are bringing Ararat to life — at least virtually.

“Mapping Ararat: An Imaginary Jewish Homeland Project” is the brainchild of multimedia artist and University of Toronto professor Melissa Shiff, her husband Louis Kaplan, a cultural historian at U of T, and John Craig Freeman, a new media expert from Emerson College in Boston. The project will be part of “Where To?” a group exhibit opening April 28 at the Israeli Center for Digital Art in Holon.

Fascinated by the subject of alternative Jewish homelands and the 19th century and the debates between proto-Zionists and Territorialists (who called for creating large, not necessarily autonomous, Jewish territories outside the Land of Israel), Shiff, Kaplan and Freeman decided to harness cutting-edge digital art and technology in an attempt to answer the “what if” questions that have lingered for close to two centuries.

Backed by a Canadian Social Sciences and Humanities Research Council Insight Development grant, and armed with the latest reality-augmenting software, the trio is bringing Ararat to life in a multiplicity of forms. The first was shown to The Arty Semite in a demonstration one recent afternoon at Shiff and Kaplan’s home, adjacent to the U of T campus in downtown Toronto. On Kaplan’s laptop computer screen, a historical monument with Ararat’s corner stone (the only extant historical artifact) appeared, seemingly right in the middle of the couple’s kitchen.

The monument will be just one “asset” in an augmented reality walking tour of Grand Island. Using any smart phone to which a program called Layar is downloaded, visitors can walk around the island (located in the middle of the Niagra River between Toronto and Buffalo) and view imagined Ararat landmarks built by the artists using a 3-D modeling program called Maya. The various assets, or virtual landmarks, will be housed on an external server and can be transmited to smart phones based on GPS coordinates.

“We plan on having a handful of highly rendered assets. In addition to the monument to Noah, we will have a synagogue, a mikveh, and a graveyard,” Shiff explained. “And we will also have other, less highly rendered ones such as a butcher shop, a bank and a school, to create a general atmosphere.” People will be able to “walk into” the interior spaces of some of the more highly rendered augments. “Your body will be moving through real space, while at the same time moving through virtual space. We will be collapsing the two,” Shiff said excitedly. The team is aware that this technology is already being harnessed for commercial purposes, but do not know of any other Jewish projects using it.

Within several years, Shiff, Kaplan and Freeman expect to have not only the Grand Island walking tour up and running, but also a gallery exhibition that will combine original artifacts and a virtual cartographic component. “In the exhibition, we will have both historical and para-historical items,” Kaplan explained. “For instance, we will have examples of money from 1825, and also “Ararat currency” that we will devise based on our research into the historical era and Noah’s vision.” Another example might be a postcard stand with authentic postcards that were for sale on Grand Island over the years, juxtaposed with ones that the team would create to reflect what Ararat might have been had it actually been built, populated and developed.

The project will be rounded out by a website providing primary and secondary resources drawn from the archives in which the team has done their research.

Kaplan, who is the project’s chief researcher, has led the effort to track down historical material. One of the most important touchstones for the project has been a map they discovered in David H. Burr’s 1829 Atlas of the State of New York, showing “Arrarat”[sic] as an actual geographical location.

Shiff is excited about how “Mapping Ararat” contributes to the transformation of archives in the age of digital humanities. Kaplan is fascinated by the “what if” aspect. “Given the natural resources and industry that were there, it’s not really so far-fetched to think that Ararat could have really happened,” he posited. He’s already musing about the possibility of similarly mapping other alternative Jewish homelands that have been considered. “Research trips to Madagascar, Uganda, Argentina, Russia, Australia, and Surinam wouldn’t be too bad,” he said with a smile.