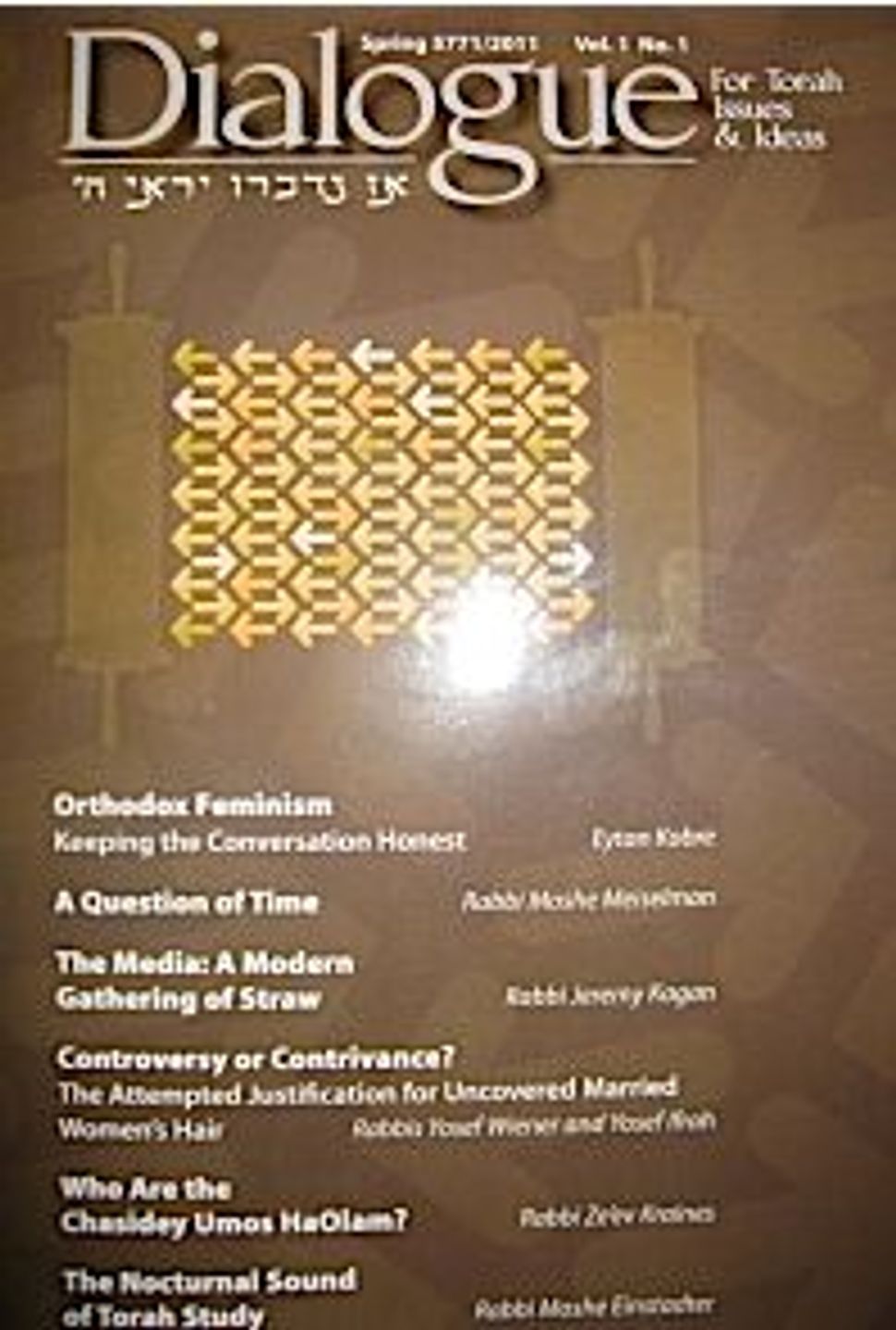 In the journal’s first issue, which appeared approximately one year ago, the editors explained the need for their publication: “There is presently no platform for the intelligent, Torah-oriented discussion of important contemporary issues and ideas by writers who are both steeped in Torah knowledge and committed exclusively to its values,” they wrote.

The last adjective, “exclusively,” carries the weight in that sentence. Other Orthodox Jewish journals, including “Tradition,” published by the Rabbinical Council of America since 1958, the “Journal of Halacha and Contemporary Society,” published by the Rabbi Jacob Joseph School since 1981, “BDD Journal of Torah and Scholarship” issued by Bar-Ilan University since 1995, and “Hakira,” independently published since 2004, apparently fall short of Dialogue’s standards.

Eytan Kobre, in the lead article of the first issue, defines those standards: The early rabbis (Chazal) alone have right to interpret the Torah. “Both the halakhic [legal] conclusions of Chazal and their ethical impeccability are unassailable by later generations,” he writes. Other articles in “Dialogue” extend Kobre’s principle to require belief in accepted interpretations of biblical narratives, and even to generating scientific conclusions from them.

A few weeks ago, the second issue of “Dialogue” showed up in the physical, snail-mail mailboxes of observant Jews across the country. The journal has no Internet presence. Instead it directs itself at Sabbath-observant Jews who, one day a week, read only hard copy or who, following the recommendation of some rabbis, keep away from the Internet all the time.

The journal’s articles reveal how its editors want to change the views of possibly wayward Jews. They include an attack on Magen Tzedek, an organization founded by Conservative Rabbi Morris Allen to certify the ethical standards of manufacturers. Dialogue’s contributor, Rabbi Avi Shafran, finds it “dangerous” for Jews to get involved with standards of ethics or social justice that may have secular sources.

The journal features a defense by Dr. Daniel S. Berman of the traditional practice metzitzah b’peh, or oral suction in circumcision, which some medical authorities consider lethally hazardous. While some Jews might accept health recommendations that conflict with traditional practice, the writer finds it not dangerous enough to justify change.

Perhaps the most interesting part of the journal is the responses to letters to the editor, which include the reluctant admission that a prominent 19th-century commentator praised Johannes Reuchlin (1455-1522) as one of “the righteous of all nations.” Reuchlin defended the Talmud against book-burners, but was Christian, so the contributor to “Dialogue” did not want to mention him as righteous.

The editors of “Dialogue” know which opinions are unassailable; readers must not question those opinions. Consequently, “Dialogue” does not have dialogue. Contributors just tell us what and whom to believe.