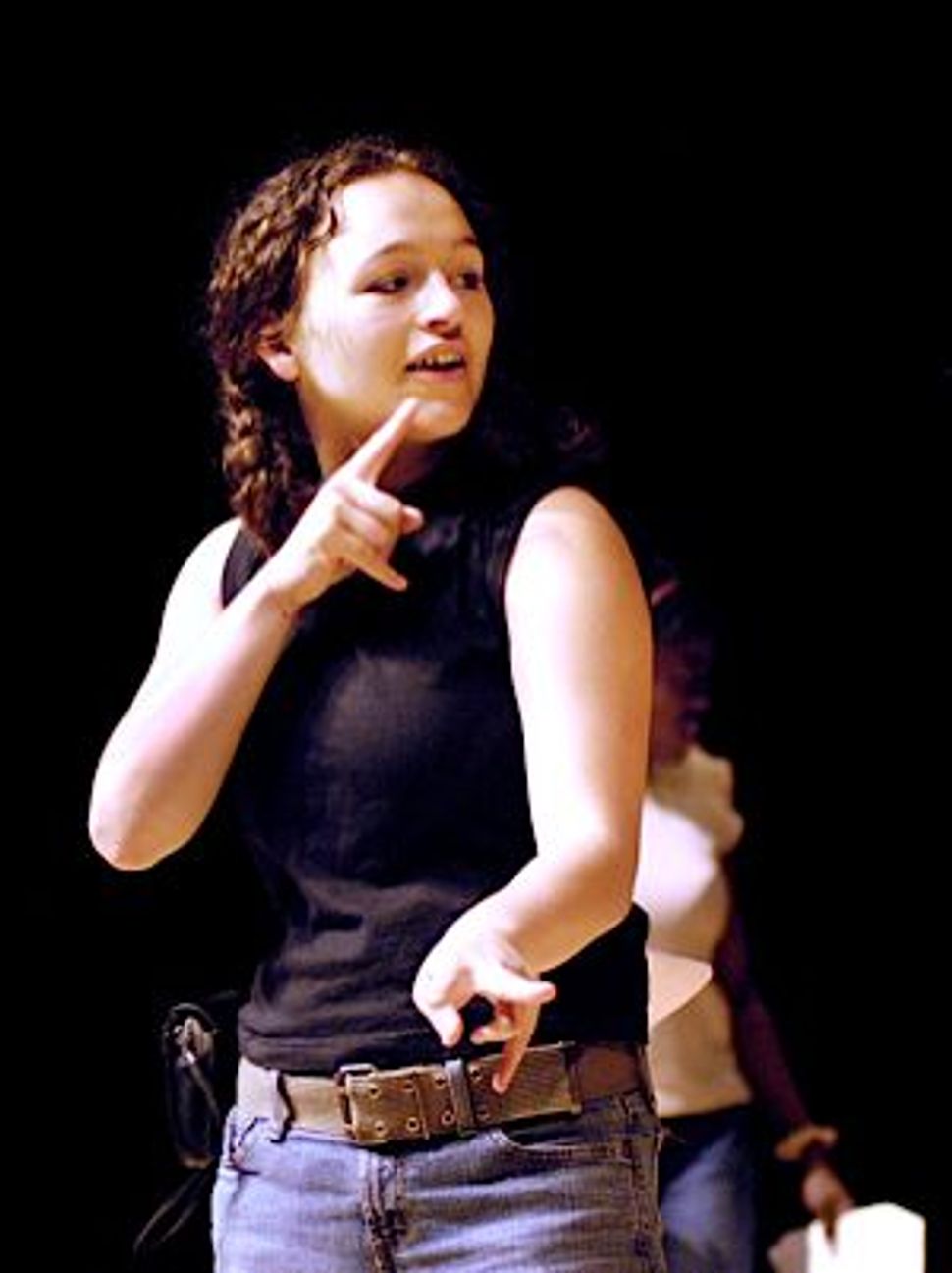 Image by Courtesy of Gat Media

In feature films the deaf have made for exotic yet sympathetic characters. From Jane Wyman as the saintly eponymous innocent in “Johnny Belinda” (1948) to Marlee Matlin’s Oscar-winning turn as a self-possessed, sexually confidant woman in “Children of a Lesser God” (1986), their portrayal measures our society’s slow acknowledgment that the deaf are, well, people. It is hard from this distance to fathom that Helen Keller was once a figure of worldwide fame, but the Broadway play and film, “The Miracle Worker,” enshrines her in our memory as a wild child brought to personal enlightenment through the ministrations of her similarly “afflicted” teacher, Annie Sullivan. 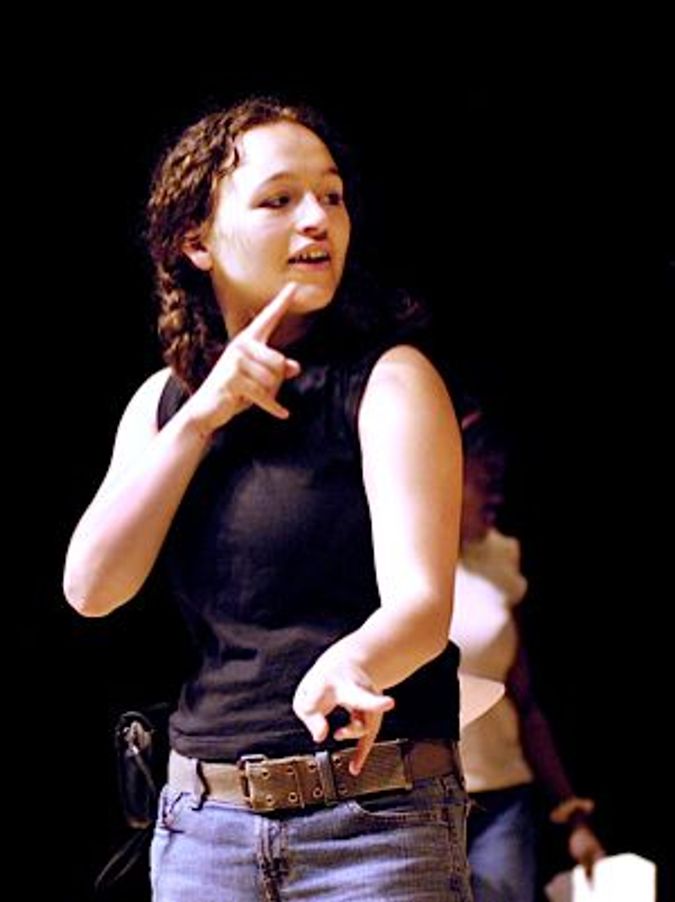 Image by Courtesy of Gat Media

Yet only since the deaf assumed their own political power in the last few decades, starting with the demand in 1988 for a deaf president to lead Gallaudet University — the most prominent American school of higher education for the deaf — have we begun to understand deafness not only as a minority physical status, but as a cultural one as well.

“Deaf Jam,” a 70-minute documentary screening May 10 at the Toronto Jewish Film Festival, focuses on a teenage Israeli immigrant, Aneta Brodski, and a cohort of her high school friends at the Lexington School for the Deaf in Queens. Split roughly into two sections, the film tells the tale of how these young people navigate their way into the hearing world’s lively hip-hop scene of spoken word poetry jams by using American Sign Language (ASL) in its most expressive, even theatrical dimensions. Later, as Aneta’s friends at Lexington leave to pursue higher education elsewhere, the film homes in on Aneta, who joins forces with a hearing poetry slammer, Tahani, a student at Columbia University. As luck would have it, Tahani is of Palestinian heritage. The two young women form an affectionate partnership, Muslim and Jew, where collaboration between spoken and “pictorial” sign language creates a hybrid that can bridge the deaf and hearing worlds.

Director Judy Lieff’s multiple cameras capture the ways in which the enclosed world at Lexington School produces a familial camaraderie among the deaf teenagers. Many of these students have traveled up through the grades since they were mere children, like Aneta’s best friend, Shiran, also an Israeli immigrant. We see the shared defensiveness among these kids as they navigate a world that keeps them isolated in their deaf enclaves, creating intense bonds of mutual support that transcend racial barriers.

Indeed, it is a delight to watch this multi-cultural band of sisters and brothers signing with lively ferocity among themselves. As they explore the fullest poetic measure of their native sign language with adult ASL teachers, we see the beauty of signing and its capacity for imaginative and spontaneous invention. One of the delights of the documentary’s early scenes is watching the variety of facial, hand and arm gestures, and full body maneuvers, which give sign language the capacity to be as fully concrete or intellectually abstract as the spoken word. So we marvel as Aneta and her friends, male and female, twist their features and contort their bodies in vivid displays of quicksilver communication.

It would be nice to report that the film’s narrative equals the interest of its real-life characters. But there is the occasional lapse into the didactic. Lieff obviously felt it imperative to educate her audience about deaf history — the suppression of sign language in deaf education lasted nearly a century in favor of enforced “oralism”— and there are significant new challenges to the community, like the cochlear implant, which threatens to diminish the number of deaf persons and weaken the bonds of deaf culture. However worthy, these scenes detour from the main plot. And while Lieff finds wonderful visual cinematic equivalents for subtitling her young ASL slam poets, the emotional core of Aneta, Shiran and Tahani’s lives is never fully examined, as if their home lives are beside the point. Likewise, the Muslim-Jewish issue between Aneta and Tahani remains undeveloped. While the friendship between the girls seems real and unforced, the fact that they communicate and collaborate successfully hardly yields a deeper portrait of either one.

“Deaf Jam” strikes me as full of good intentions, but it skates over core emotional issues: teenage isolation deepened by communication barriers; female friendships whose depths are never sounded; immigrant experiences in which generational divides between parents and children can be especially difficult. Aneta and Shiran, who happen to be deaf, also happen to be bright, energetic, sometimes raucous and angry young women, each with a family story that might well have made its own film. “Deaf Jam,” in its attempt to cover a complex moment in the lives of a courageous segment of the deaf community, has missed the chance to go deeper. As an introduction to deaf culture, “Deaf Jam” will certainly expand the minds of many in the hearing community. But the film might have done better to aim straight for the heart, which is where these kids live.