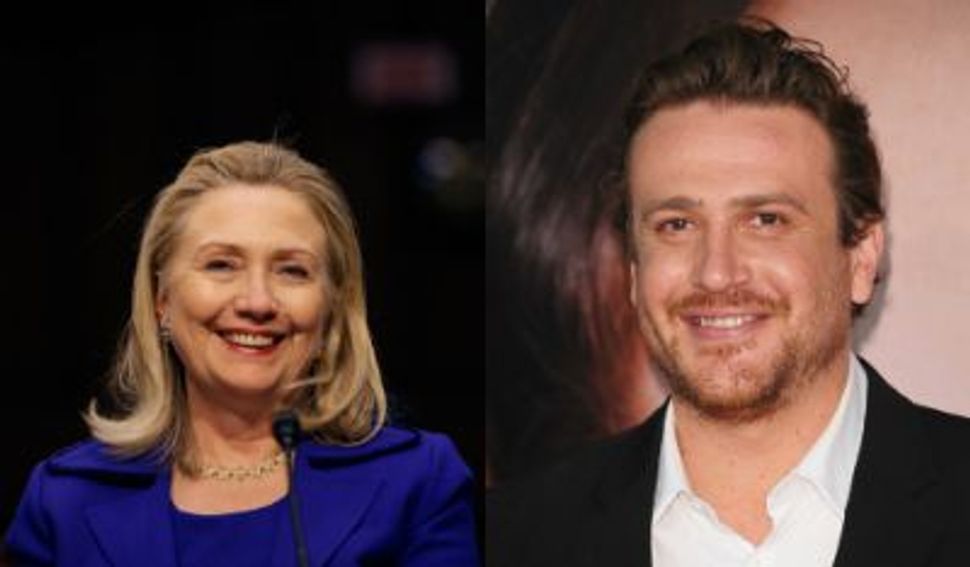 Jason Segel is a guy who looks ahead and thinks big. While complimenting his current co-star Emily Blunt (“The Five Year Engagement”) in an interview with Us Weekly back in March, he mentioned that he’d ultimately like the chance to appear on the big screen together with another special gal.

Segel wasn’t talking about Mila Kunis, Drew Barrymore, Reese Witherspoon, Natalie Portman, Jennifer Aniston, or any of those other romcom leading ladies. He was thinking really outside the box…well, at least outside of Hollywood. Who does he want to share the marquee with? None other than Secretary of State Hillary Clinton.

“I just feel like she would be good at comedy,” the actor and screenwriter said about Madame Secretary. He has a point. After all, you’ve got to have a sense of humor to be able to deal with some of those international actors she encounters (we’re talking Hugo Chavez, not Antonio Banderas).

Indeed, Clinton did have a sense of humor about Segel’s suggestion. In response to his remarks, she recently wrote him a note:

I was delighted to read about your interest in sharing the big screen with me. As you can imagine, I am a little occupied at the moment, but perhaps someday I can help you forget Sarah Marshall … again. My only condition is that there be Muppets involved, and that is non-negotiable. In the meantime, you have my best wishes for continued success with your career.

With best regards, I am
Sincerely yours,
Hillary Rodham Clinton

The Secretary signed it simply “Hillary” in her own handwriting. Must mean she likes Segel. Now all we have to do is wait until he cashes in Clinton’s rain check — assuming he can line up the Muppets, too.