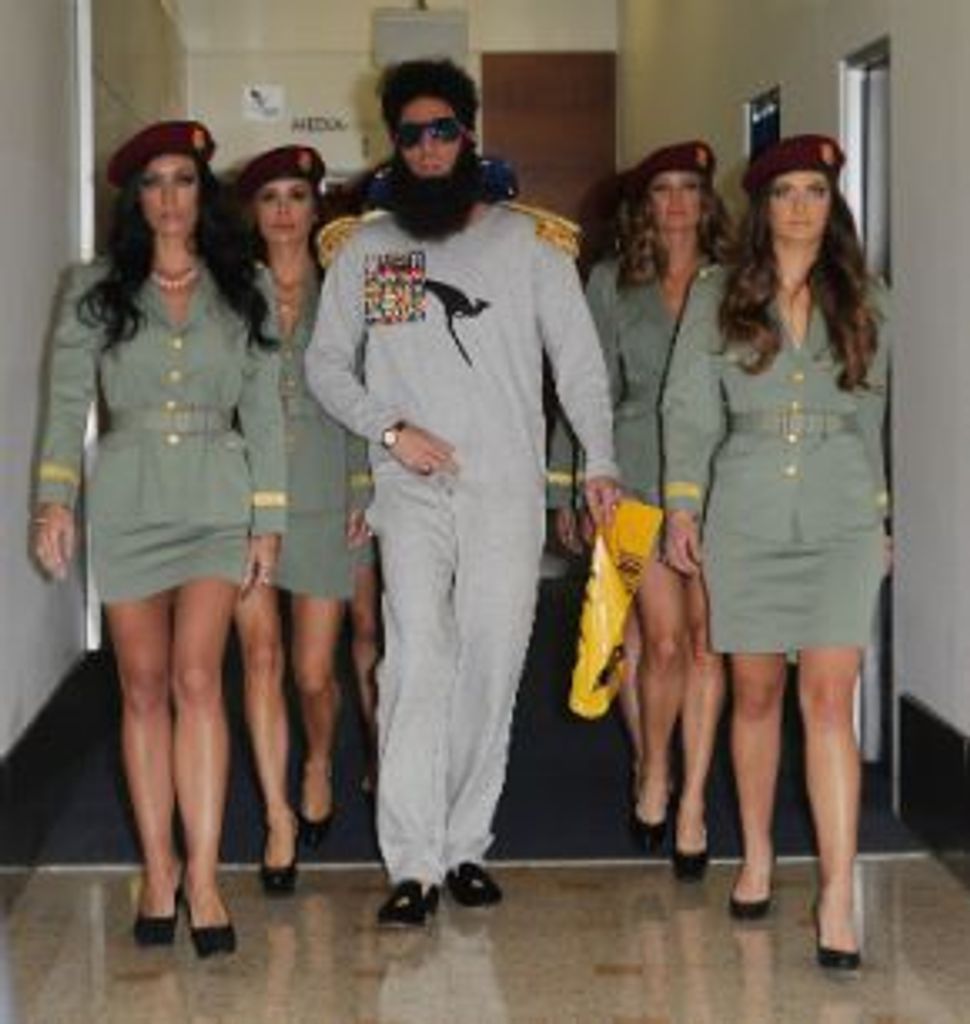 ?The Dictator? arrives in Sydney, Australia. Image by Getty Images

Sacha Baron Cohen ruined some Australians’ breakfast appetites when he appeared this morning on the country’s Today Show to promote his new movie, “The Dictator.” In fact, he seemed to be making the show’s hosts so uncomfortable that at times it looked like they themselves might toss their cookies right there on the set.

Dressed as Admiral General Aladeen of the fictional Republic of Wadiya and flanked by two scantily clad female “guards,” Baron Cohen began his R-rated conversation with the hosts by bringing regards from Mel Gibson. “He has just become the head of our Department of Race Relations and he’s on the board of the Museum of Intolerance,” the admiral notified them.

As is his custom when he is in character, Baron Cohen threw some Hebrew words into the conversation, pretending that they were in the native language of his fictional country (which in this case would be Waidyan — whatever that is). In making overt and disgusting sexual advances toward the female host, Lisa Wilkinson, the admiral said he wanted her to come to his palace, where he would touch her all over, but not on her “malawach.” Wilkinson, who speaks neither Wadiyan nor Hebrew, replied uncomfortably, “I don’t know what that is, but I’m nervous.” It turns out that she needn’t be too worried — malawach is a fried bread that is a staple food of Yemeni Jews and so popular in Israel that it is available in packages in the freezer section of all supermarkets there.

Of course, Baron Cohen had to throw in some blatantly anti-Semitic remarks from his character. In mentioning how much money his film, which will be released on May 16, has taken to produce, he proclaimed: “It’s taken more money than ‘Titanic’ — you know, that film about the ship sunk in 1912 by Israel. Was it sunk by an iceberg or a Goldberg? You do the mechutmet.”

Any guesses as to what that last word means? The Shmooze thinks it is completely made up, as it’s definitely not Hebrew.

Having completely nauseated the Australian morning show viewing public, the dictator said, “Breakfast TV. Why do you have me on? I know you’re thinking about that.”