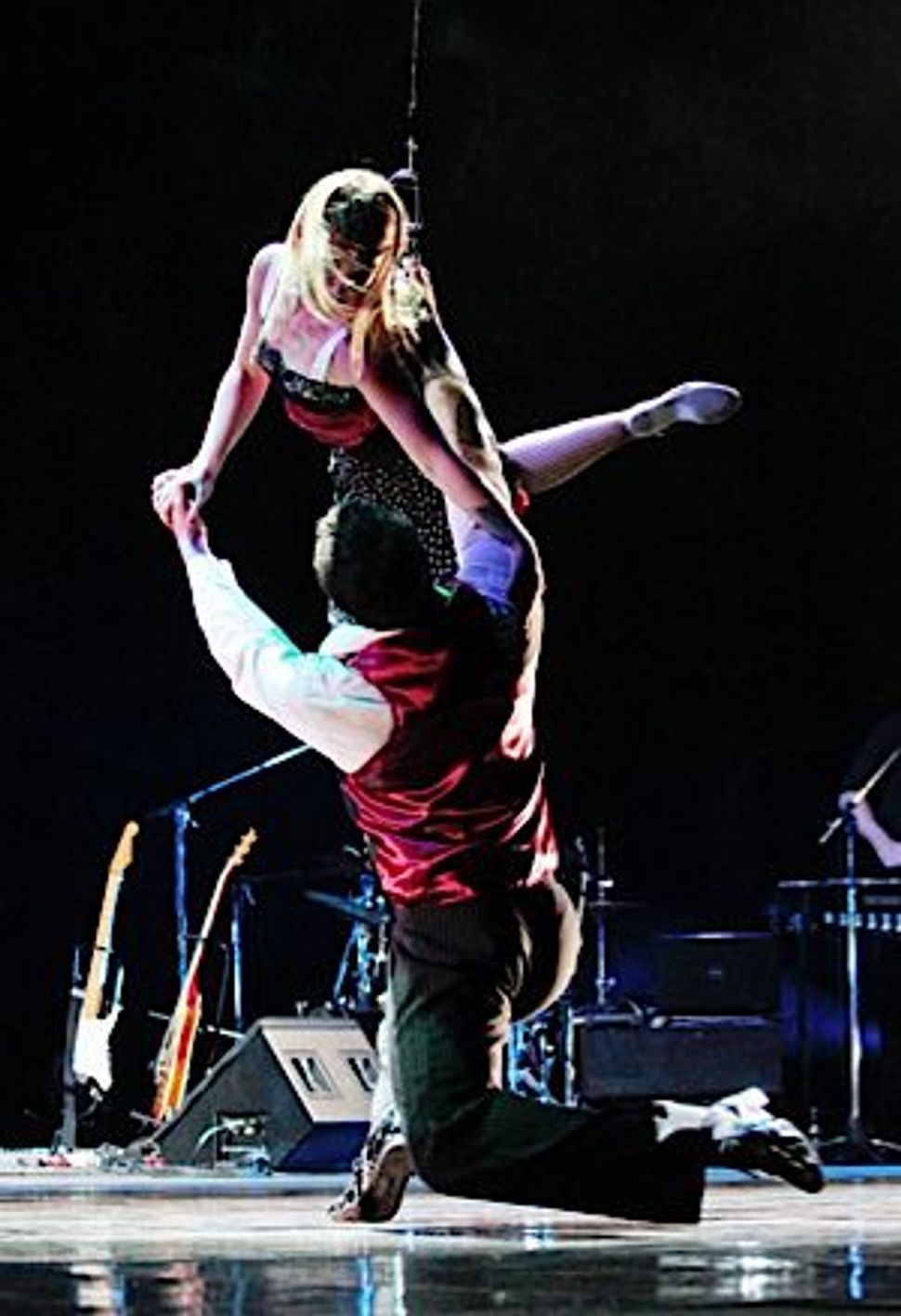 “8cho,” which made its Broadway debut on May 4 at the New Victory Theater, is the newest of Angiel’s aerial dance creations. The show, running until May 20 at New York’s historic family-oriented theater, features six dancers. Accompanied by Juan Pablo Arcangeli’s tango orchestra, they perform a series of athletic vignettes ranging from sensual to humorous.

Aerial choreography has the potential for gimmickry, but Angiel avoids such pitfalls through her sophisticated choreography and intricate rigging of cords, bungees and ropes. The dancers jump over each other and tango up the wall, creating mesmerizing visual effects. Lucas Coria, linked by his wrist to a bungee, performs a breathtaking solo sweeping and gliding his limbs across the floor as though skating on ice.

With the ability to ascend into the air, the dancers expand upon traditional tango vocabulary. The lifts go higher, the dips dive eerily close to the floor, and the interweaving footwork has a bouncy dynamism.

A native of Buenos Aires, Angiel is the granddaughter of Russian and Polish Jewish immigrants. Arriving in Argentina in the 1920s and ‘30s, her grandparents, like many of their European neighbors, relished in the tango scene. “No matter what your background, in Argentina tango seeps into your skin,” Angiel said.

Angiel has not examined Jewish themes in her work, but she and her family stay connected to the Argentinean Jewish community, the largest in Latin America. This July, her company will tour for the first time in Israel performing another piece, “Air Condition,” at the Tel Aviv Center for the Performing Arts.

“The last time I was in Israel was as a teenager picking oranges and living for two months on a kibbutz,” said Angiel. “I’ve wanted to perform there for a long time — I’m thrilled to return.”

Trained in both ballet and contemporary dance, Angiel began creating aerial dance in 1994, motivated to explore a fuller dimensionality in choreography. “Aerial dance isn’t circus or acrobatics, it is choreography in the air,” said Angiel. “It redefines decisions of timing and spatial relations. It plays with completely new sensations.”

A true pioneer, Angiel opened the first aerial dance school in the world in 1998. Featured in festivals worldwide, her choreography often deals with abstract themes, and 8cho’s homage to the tango is new territory for her.

“’8cho’ is my reflection on tango. The songs are traditional but the interpretation is definitely not,” Angiel said. “It is also a reflection of my heritage and the diversity of Argentina. “