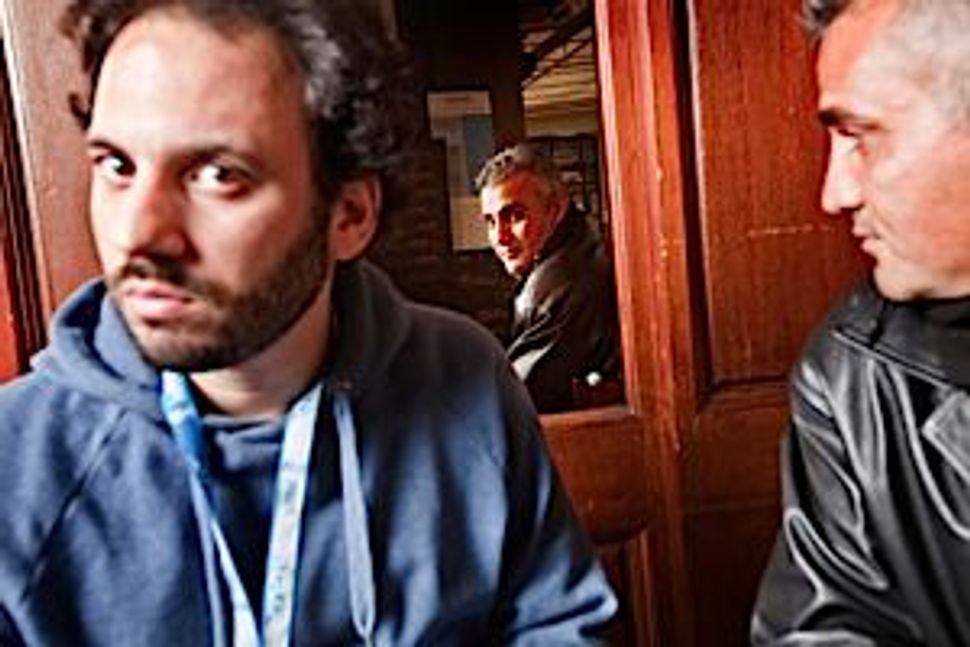 Davidi first came to the West Bank village of Bil’in from his native Tel Aviv in 2005, as an “Indymedia” activist. Bil’in has been engaged in a non-violent struggle against Israel’s security barrier, which encroaches on its property, as do a number of Jewish settlements. Davidi spent several months there making his first full-length film, “Interrupted Streams” (2006). His current work documents life in Bil’in through 2010, when Israel’s supreme court ordered part of the security barrier to be removed from village land.

Davidi wrote the script for his collaborator Emad Burnat, a Bil’in farmer who, although completely untrained, “has a good eye, a good sense of aesthetics.” Burnat is at once the narrator, central character and primary cameraman of the film. It is Burnat’s story, and that of his family, friends and neighbors, which is framed through the narrative device of the five cameras that were literally broken as Burnat filmed. Some were shot apart in his hands, by gas canisters and (once) a bullet that would otherwise have killed him; another was destroyed by irate settlers, and yet another in a near-fatal car crash.

Of Moroccan and Romanian background, Davidi fell in love with cinema in high school. “So when I was suppose[d] to go to the army like every Israeli has to when he gets to be 18 years old, I knew what I want to do in life,” he said.

His vocation became even more clear after going through an army orientation program in high school. “This experience was disturbing,” he said. “Even though I did not have a very developed political awareness at that age, I immediately felt dizzy and was revolted by the idealization of violence. At the end of that tour, there was a spectacularly ridiculous… propaganda film [from] the army corps. I distinctly remember having tears in my eyes as I had an important understanding that I should shoot truthful and sincere films and not shoot people.”

Davidi served for a few months in the army before being discharged on “mental health” grounds. After a year studying at Tel Aviv University, where he found cinema studies “oppressive,” he moved to Paris, where he toyed with the idea of leaving Israel permanently, but nonetheless returned.

Like many artists, Davidi has learned to live modestly and to do a number of jobs to get by, like script writing, camera work, editing, producing and teaching. Though he looks forward to making fictional movies he finds more freedom in documentaries because he’s less dependent on funding sources and the need for a cast and crew. He can always just begin filming.

Politically, he thinks that the social protest movement of last summer may be heating up again and he feels that it’s more acceptable now to be politically engaged. Although not a party supporter, he voted to elect one particular Member of Knesset he admires, Dov Khenin of Hadash.

Still, he is hopeful: “I think that things will get better … but I’m not sure when the window of opportunity will open again as it did in the 1990s.” He added: “Not many things can go worse from this [low] moment. But it can all change very fast; Israel’s a very dynamic society.”

Watch the trailer for ‘5 Broken Cameras’