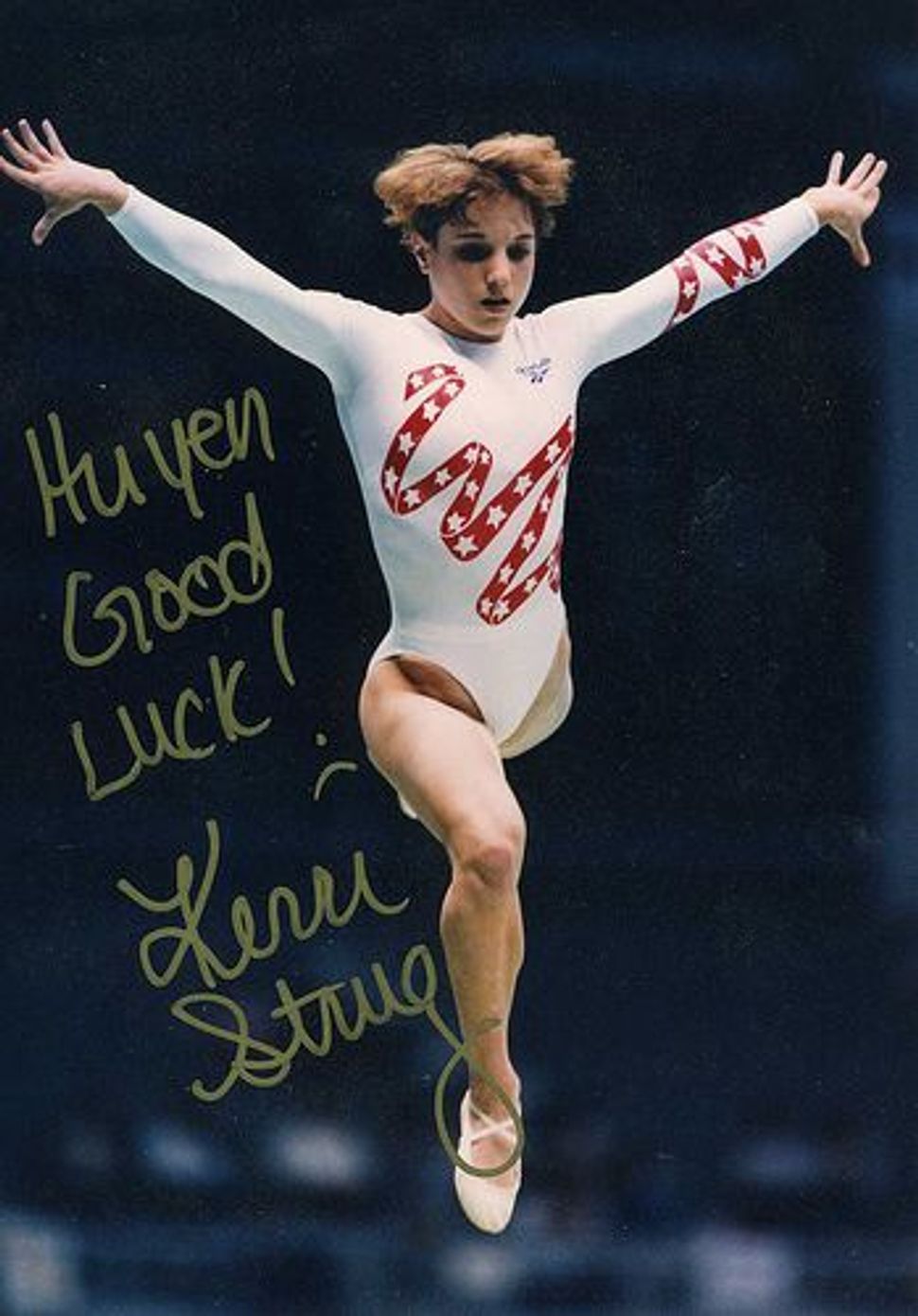 It’s a boy for Olympic gold medal-winning gymnast Kerri Strug and her husband, Robert Fischer! Their son, Tyler William Fischer, was born on March 1, according to People magazine. The couple has been married since April 2010, and this is their first child.

Little Tyler weighed in at 7 lbs. 1 oz. at birth, which is no small thing given his mother’s tiny 4’10’ frame. “For me, he was large!” exclaimed Strug.

Although back in the summer of 1996 not everyone followed the gymnastics competition at the Atlanta Olympics as closely as “Heresy on the High Beam” author and Forward contributor Dvora Meyers did, many of us recall Strug’s amazing feat of courage at those games. As People reported it at the time:

With U.S. women gymnasts clinging to a precarious lead over Russia in the finals of the team competition, Strug, 18, going last in the vault, heard a snap in her left ankle when she landed. As 32,000 spectators gasped, she hobbled to the sidelines, then, clenching her teeth against the pain, charged down the runway for a second vault. With the ankle already swelling and her leg numb, she scored 9.712, landing almost perfectly while taking most of the weight on her right foot. For a moment she raised her arms in victory. Then she crumpled to the mat, her face twisted, her eyes brimming with tears.

The U.S. won the gold, and Strug went on to enroll at UCLA shortly thereafter. Two years later she transferred to Stanford, where she earned both undergraduate and graduate degrees. The Tucson native later told Hillel in an interview that she began to strengthen her Jewish identity while in school. She credits her college boyfriend, who took her home to celebrate Jewish holidays with his Conservative family, with encouraging her in her Jewish journey.

Earlier in her life, gymnastics took precedence over everything else, including her Jewish education. “By the time I was seven, I was winning competitions and I had to make a choice — go to Hebrew school or go to the gym,” she said. “When I was training with Bela [Karolyi], if I wanted to take Saturdays off [to celebrate Shabbat], I could forget about it,” she added.

This summer, Strug will once again be at the Olympics — this time working with Hilton HHonors Support the Dream.. There’s been no word as to whether Tyler, who has already vaulted to celebrity baby fame, will be taking in some of the gymnastics events in London with his mom.