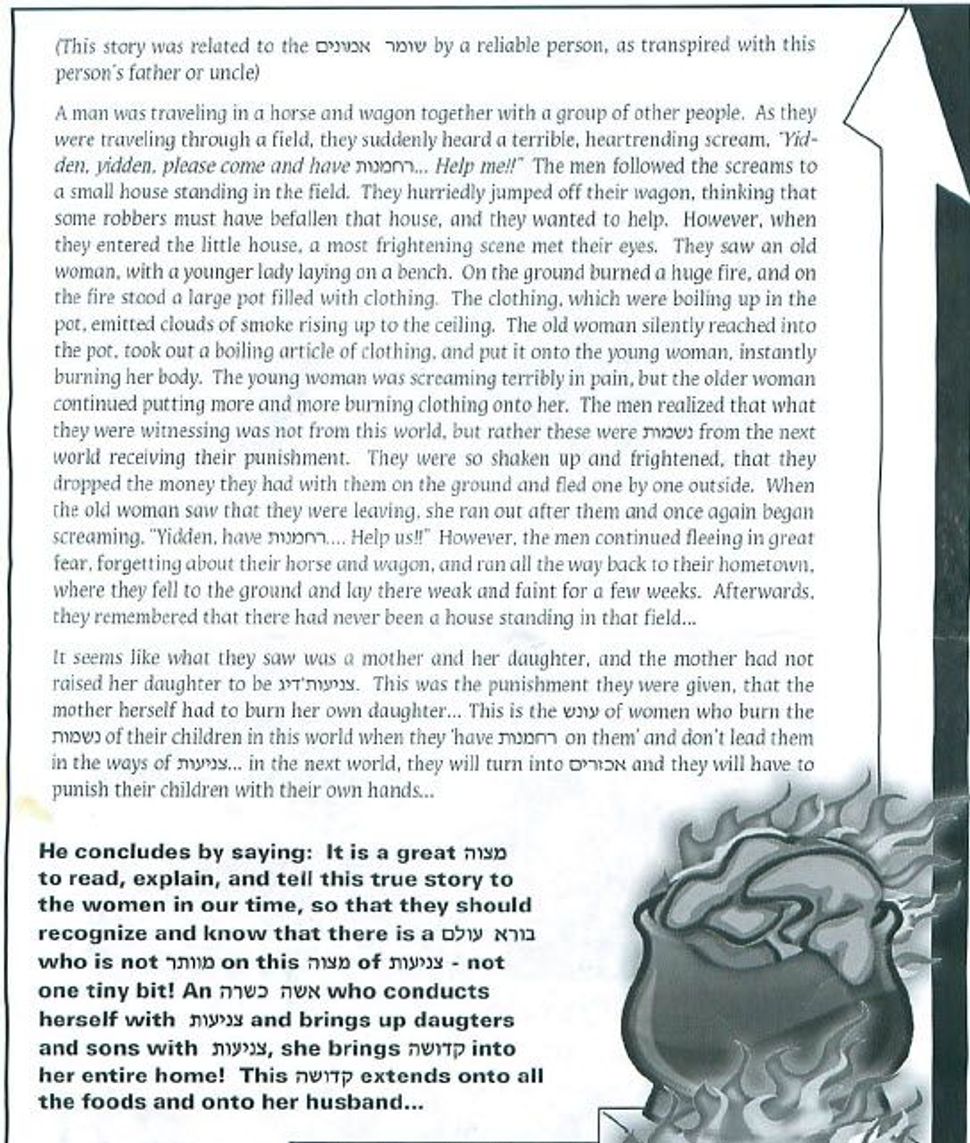 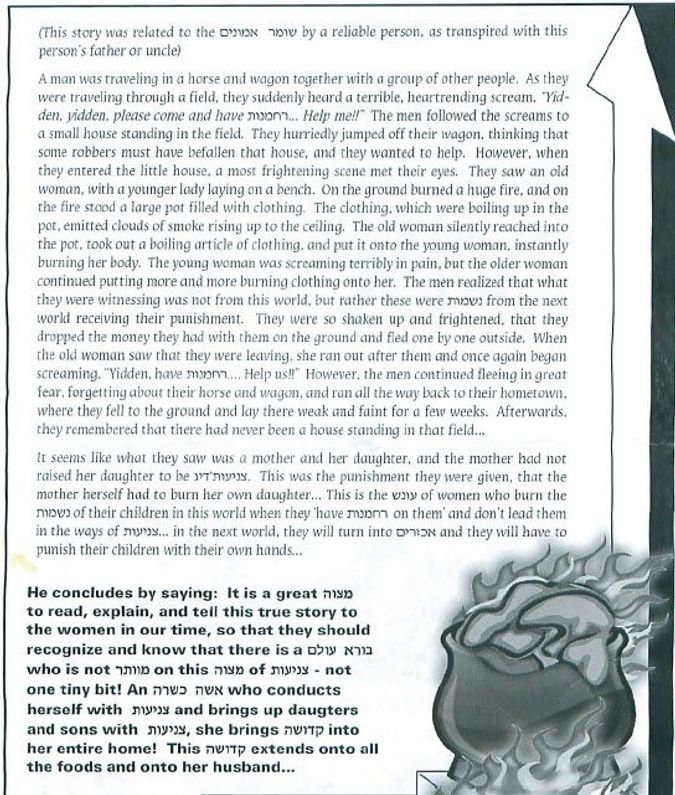 At a time when American Haredi controversies are blossoming, from stadium-filling Internet protests to molestation charges, there are apparently still offenses lurid enough to shock. One such transgression, perpetrated by a Bnos Yaakov Elementary School, was reported by the community blog The Lakewood View. If you were following the Internet protests, you know how complicated a position this blog must take.

“A Concerned Parent” submitted to the blog a copy of a story that was handed out to all grades, setting off a debate about the tale’s appropriateness for young audiences.

The handout tells the tale of men who were drawn to a house by “heartrending” cries. There they found a woman boiling clothing and draping the garments onto a younger woman. We find out that the women are mother and daughter. Because the mother allowed her daughter to dress immodestly in “this world,” now, in some Dante-esque contrapasso (or middah keneged middah) “next world” punishment, she is dressing her in burning garments.

The reactions, which ranged from defensive to apologetic to enraged, were predictable. Most people were rightfully horrified that young children are being scared into dressing more modestly. It is not like Bnos Yaakov students are particularly provocative to begin with. Other people thought it was mistakenly sent out, and should not disgrace an otherwise respectable school. A few people believed it was all a conspiracy to discredit Lakewood.

Few people have noticed how strange the story really is, and how it represents a remarkable intersection between Jewish narrative traditions and American ones. The Jewish flourishes are obvious. The story is told in English and Hebrew: the young woman yells for rachmanus, or mercy. It seems to take place in some anonymous shtetl. The punch line is an admonition to wear more modest clothing.

But the American tropes are what’s really interesting. The story opening is textbook urban legend. “This story was related to the Shomer Emunim by a reliable person, as transpired with this person’s father or uncle,” it reads.

Almost exactly like, “I heard it from a friend of a friend,” or “the barber of a third cousin.”

Just like the urban legend displaces the source of a story to lend the narrative authority, this story uses the same narrative trick to establish truthfulness in the eyes of the readers. Though the Shomer Emunim, aka the revivalist Hassidic leader R’ Arele Roth (1894-1947), was a real person who famously claimed that immodesty caused the Holocaust, from him the story spirals into anonymity.

The burning daughter comes by way of Southwestern United States ghost traditions. We are told that “a man was traveling in a horse and wagon together with a group of other people.”

We don’t know who he was, where he was going, or what his relationship to this group of other people was. True, they could be Hasidic men traveling to visit their rebbe, or they could be settlers crossing the plains. The burning itself is gothic Americana — “Wicker Man” style poetic torture.

“They entered the little house,” it says. You know, the one on the prairie.

Finally, though not specifically American, one detail seems particularly fairy tale-esque in a way that calls to mind the Brothers Grimm. When the men flee the scene, “they were so shaken up and frightened, that they dropped the money they had with them on the ground and fled one by one outside.”

What a strange detail to include! Why does it matter that they dropped their money on the way out? How did the money fall out of their pockets?

Notably we are told that when they heard the young woman’s cries they “hurriedly jumped off their wagon, thinking that some robbers must have befallen that house.” It’s as though a second story has been redacted, some other rendition excised, or inserted poorly so that the lines still show.

Some of the blog’s commentators were troubled that the men don’t try to help the young woman. They suggested that if this story was non-fictional, the women were clearly involved in an abusive, predatory struggle.

Our children, the thinking goes, should be taught to help screaming strangers, not to flee. Concerns of abuse loom large for many Orthodox parents. Those, of course, include the molestations in schools that take place over the course of decades. Not to mention the quotidian daily abuses, like discovering that your second grader has been given a story like this to read.

Maybe that’s why this got passed around in the first place. All fairy tales and urban legends share one thing in common: They are terribly compelling to the people who tell them. They are about images you just can’t get out of your mind.