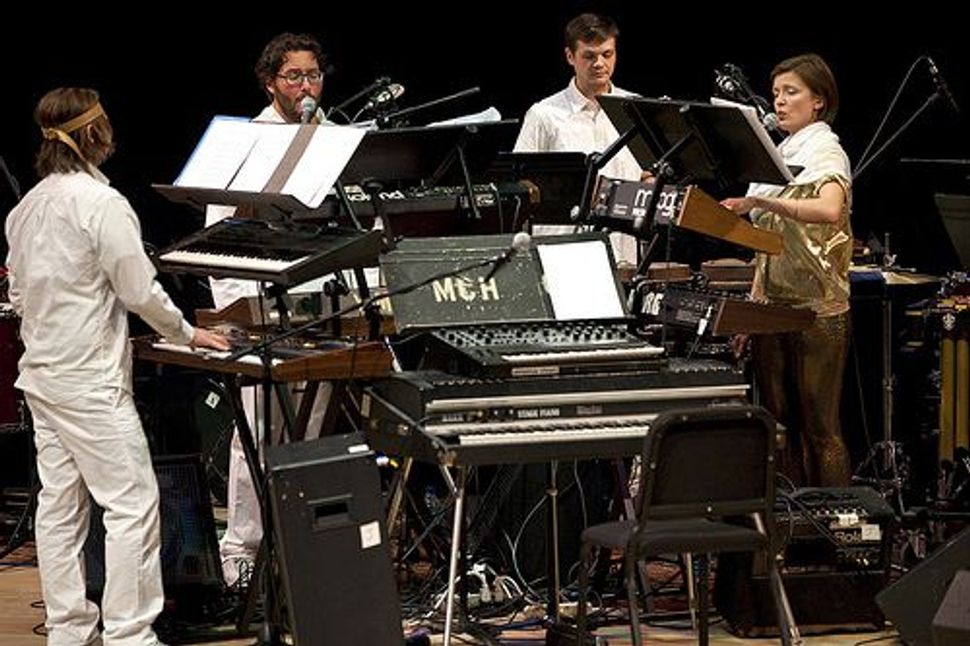 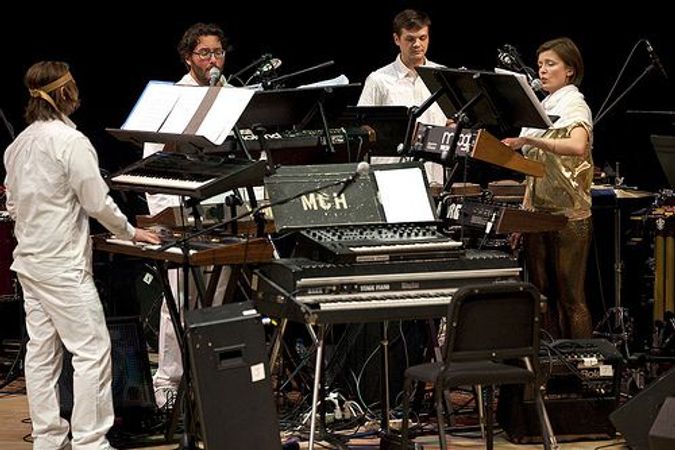 Greenstein played selections from his new work, “Sh’lomo,” commissioned by the Six Points Fellowship. A musical interpretation of the life of King Solomon, the work doesn’t appear to be finished yet, but the four pieces I saw — performed by his nine-piece band, the Yehudim — were bright and buoyant and promising.

The strongest piece was “These Are The Sons of Israel,” gliding smoothly through sections of choral incantation, jazz-fusion and synth-pop. It was undergirded by an Afrobeat pulse, with funky guitar and bass. Greenstein, on Fender Rhodes, confidently traded lead vocals with Olga Bell, also on keyboards.

Ecstatic Summer, presented by Arts Brookfield as part of the River to River Festival, is an offshoot of the Ecstatic Music Festival, a winter endeavor curated by Greenstein and dedicated to presenting collaborations between musicians who might not otherwise collaborate: The Mountain Goats and Anonymous 4, for example. Basically, it’s indie meets classical.

It’s a good idea, if it works. On Saturday, it did and it didn’t. The evening was billed to feature the vocal octet Roomful of Teeth, performing after the Yehudim’s opening set. The group sang works by Merrill Garbus (of Tune-Yards) and the composer William Brittelle, who co-directs New Amsterdam with Greenstein. To finish the night, the Yehudim accompanied the a cappella group for one relatively anticlimactic song.

Garbus sang two songs with the group, one with the four women in the octet and the other with the additional four men. The group is known for its virtuosity, using difficult techniques like throat singing, which involves overtones. But when the singers tried to imitate Garbus’s idiosyncratic yodel — with all the groaning and screaming and panting thrown in — it seemed like a parody of her style.

The pieces Brittelle wrote for the octet worked better than Garbus’s. At times they could be lush vocal landscapes with satisfying harmonies. But most often, they failed to seem like more than self-conscious exercises. Roomful of Teeth would probably have been better served if they had been able to perform their own music, as Garbus did.

Right after Greenstein’s opening performance, Garbus took the stage. She stood in a black dress flanked by a bass tom and a snare drum, which she hit occasionally with drumsticks, looping her voice underneath her animal-like screams. She wore a necklace with orange and yellow beads and had white bars painted below her eyes. “You are a party in a can,” she intoned, the crowd buzzing with excitement.

It became clear that the strongest collaboration of the night had occurred between Garbus and the audience.