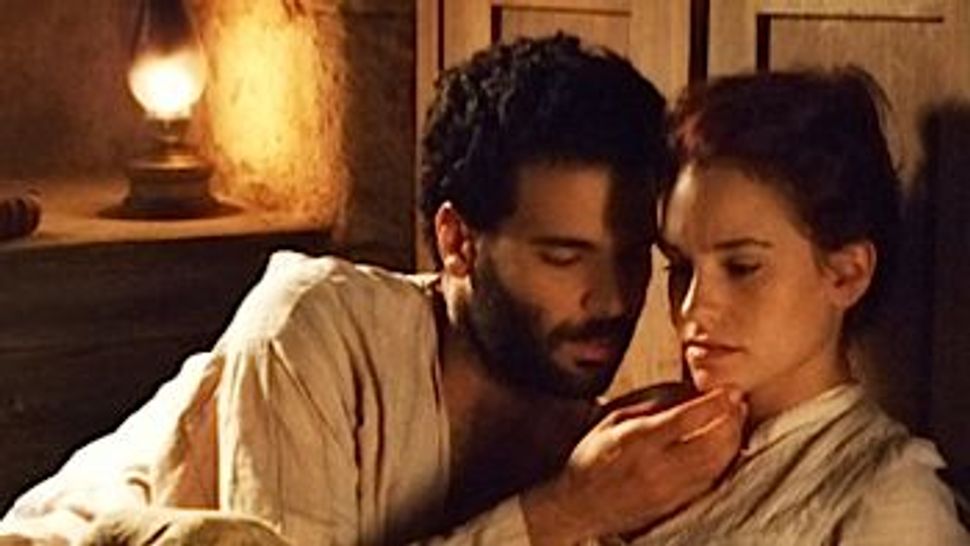 But one need not know the first thing about Laurence Oliphant — or indeed much about 19th-century Palestine — in order to get swept up in a subtle, deftly told love story in which politics play only a minor part. Wolman has billed “Gei Oni” as a historical epic, but his focus is more intimate than that description suggests. The film follows Fanya (Tamar Alkan), a young Russian woman who, after having seen much of her family murdered in a pogrom in Ukraine, arrives in Jaffa with her infant daughter, elderly uncle, and an emotionally handicapped brother. Adrift in a foreign city, Fanya searches for work to support her dependents, but soon finds herself married off to Yechiel (Zion Ashkenazi), a widower with two children. Yechiel takes his new wife to “Gei Oni,” a small settlement near Safed, where he and other Jewish settlers are engaged in the grueling labor of attempting to cultivate barren, rocky land they bought from local Arabs.

It’s not difficult to see why Yechiel is drawn to Fanya: Alkan, who makes her screen debut in “Get Oni,” is enchanting, with dark, expressive eyes and a radiant smile made somehow lovelier by the small gap between her front teeth. When Fanya, out of place on the streets of Jaffa in her long skirt and high-collared blouse, first speaks to Yechiel in shy, halting Hebrew (she’d have preferred Yiddish), it’s clear that he’s a goner — and who could blame him? But it’s excruciating to watch Fanya cry — not happy tears but deep, wrenching sobs — at their perfunctory wedding ceremony just days later. Yechiel might be a good man, but he’s a stranger.

And life in Gei Oni has little to recommend it: Yechiel and Fanya live in extreme rural poverty, with almost nothing to feed their three children. Their most prized possession is a small sack of wheat seeds painstakingly harvested over a period of months, and Fanya’s petite frame is not well-suited to the work of removing heavy stones from their patch of rugged desert land. Still, she never complains. Rarely exchanging more than a sentence or two with Yechiel, Fanya becomes a good mother to his children, trading with Arab women, despite warnings of danger from Yechiel and the other men, to obtain the food and medicine they desperately need. Watching the children drink milk, Fanya seems to glow with satisfaction over what she, a gentle Russian girl who still clings to a stack of books from home, was able to accomplish alone in the desert.

Ashkenazi and Alkan have great chemistry together, and it’s a credit to their fine acting that we’re able to glean so much about a marriage in which so few words pass between husband and wife. Days become easier as Fanya makes herself indispensable to life on the frontier, but nights remain a torment. Yechiel’s anguish over their unconsummated union is keenly felt, even as we realize — long before he does — that something in Fanya’s traumatic past has made her terrified of physical love.

In one of the film’s most telling scenes, Yechiel and Fanya gather with Oliphant and Imber in a lavish Haifa mansion filled with fine china, sumptuous food and other old-world comforts. Fanya flashes her dazzling smile, delighting in conversations about poetry and art — things she left behind when she fled Russia. When she’s persuaded to take a turn at the piano, Yechiel fidgets in the back of the room, aloof, as the others lean in, enthralled. In this context it’s suddenly clear how little Fanya and Yechiel, who was born in Palestine and certainly never took piano lessons, have in common. When Imber, portrayed by Ariel Krizopolzky as a flattering fop, praises Fanya with lines like “You could have been the queen of St. Petersburg, Vienna, Paris; allow me to kiss the edges of your dress,” the scowl on Yechiel’s face indicates not just simple jealousy, but also the pain of exclusion.

The lesson of the film, of course, is that not every successful union begins with such grand, romantic declarations. The quiet devotion already burgeoning between Yechiel and Fanya is a stronger, deeper kind of love, born out of patience, shared sacrifice, and gentle sensitivity to one another’s doubts, dreams and fears. And, like wheat sewn in rocky earth, it takes time to grow.

Watch the trailer for ‘Gei Oni’: