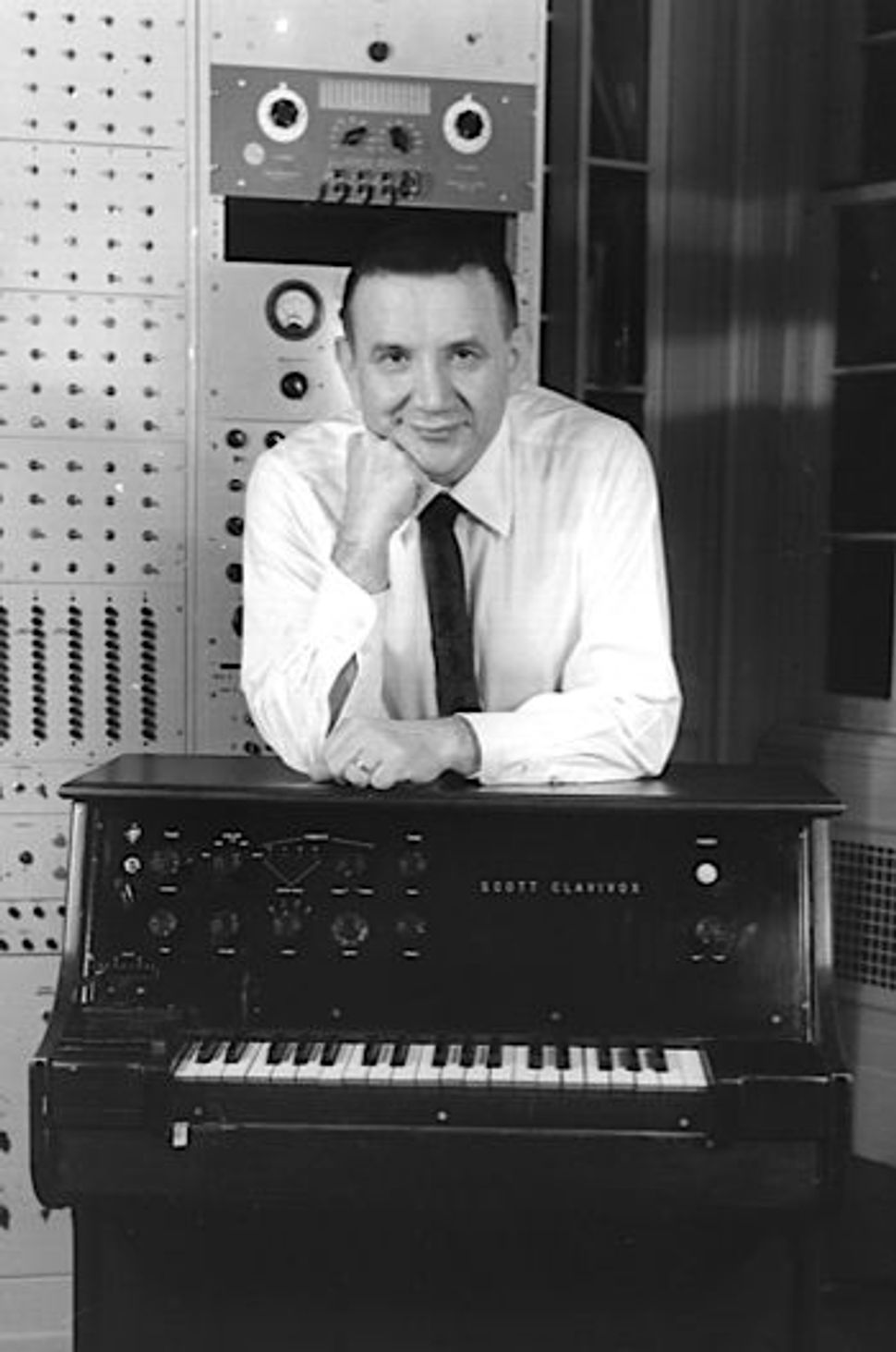 Image by Courtesy of Waterfall Films 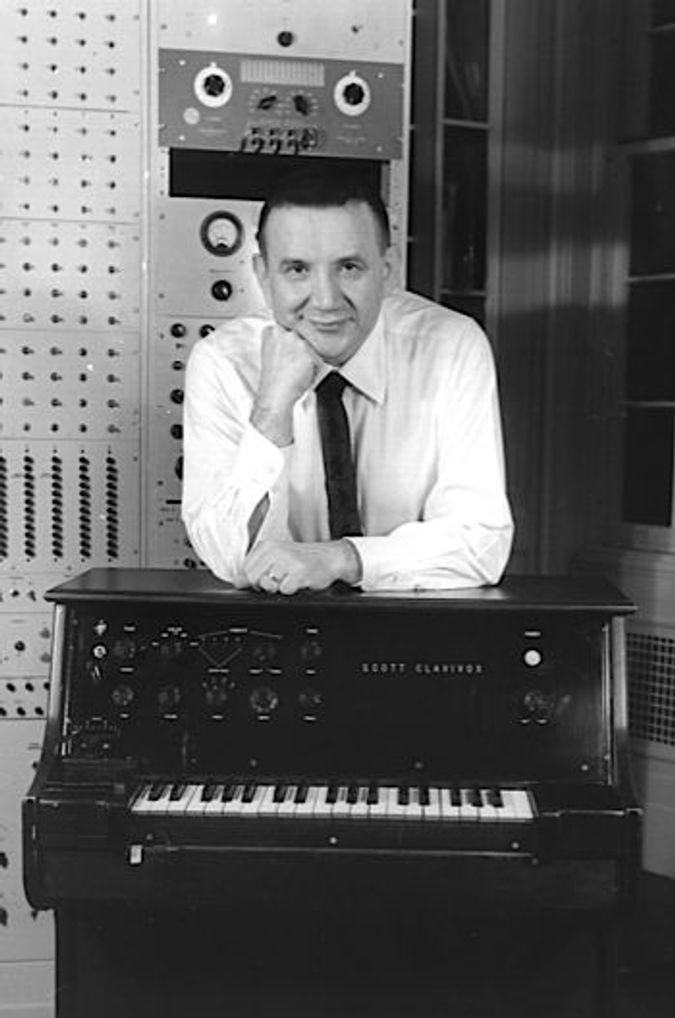 Image by Courtesy of Waterfall Films

A technophile and jazz musician who was out of step with his time, Scott made a living writing for popular film and television of the 1930s, ’40s and ’50s, but spent his free time experimenting at the frontier of electronic music. As he refined his inventions — early synthesizers and sequencers — Scott envisioned a future in which machines could make music all on their own.

Born Harry Warnow to Russian-Jewish immigrants in Brooklyn, Scott learned the piano by placing his fingers over the moving keys of a player piano in his parents’ house. Fascinated by gadgets, he planned to become an engineer, but was persuaded to attend the Institute of Musical Art, the school that would later become Juilliard. Hired as a staff pianist for CBS radio in 1931, Scott started composing original pieces that went over so well with the CBS audience that producer Herb Rosenthal let him form his own group, the Raymond Scott Quintette. After a Hollywood tour performing with the quintet in 20th Century Fox films like “Ali Baba Goes to Town” and the Shirley Temple vehicle “Rebecca of Sunnybrook Farm,” Scott returned to CBS in New York and formed a big band. Breaking the network’s rule, Scott insisted on including black as well as white members in the group, assembling the first racially integrated studio orchestra in 1942.

Scott’s music from this period is difficult to categorize. As several musicians in “Destructing Dad” point out, his use of chromatic pitches and complex, driving rhythms prefigured bebop; this is sumptuous old Hollywood jazz with a distinctly modernist edge. But Scott was no cool cat: He detested improvisation and ran his rehearsals like a drill sergeant. Rather than handing out sheet music, Scott composed at the piano, surrounded by his quintet. The musicians were permitted to try out different sounds — but only until Scott heard a riff he liked. After that, the band repeated the same music over and over, perfecting passages that may have sounded improvised but were actually burned into memory through incessant repetition.

By all accounts an unusual fellow, Scott was also a mostly absent father, too busy writing advertising jingles and hosting the variety show “Your Hit Parade” throughout the 1950s to take his son to a single ballgame. In the film, Warnow channels his own ambivalence into a nuanced critical appraisal of Scott’s life and work.

Warnow’s saucy 90-year-old mother — Scott’s first wife, Pearl — describes Scott as creative, terrible with money, and, beginning when they were courting in the 1930s and he meticulously recorded their phone conversations, completely obsessed with sound equipment. It’s also from Pearl that we learn about Scott’s fear of being outed as a Jew: In addition to changing his name, he underwent plastic surgery — a primitive nose job that his wife termed “self mutilation.” In his voiceover, Warnow reflects: “I’m saddened by the fact that my father felt compelled to symbolically turn his back on the culture that produced him, whose values of creativity, intelligence, discipline and progressive thinking he embodied so completely.”

That may be the film’s most poignant moment, but Warnow’s smartest quip comes later, after his mother tells the story of how Scott adopted a 12-year-old singing sensation named Marjorie Chandler and set out to groom her for mega-stardom. As the girl aged, took the stage name Dorothy Collins and began touring with Scott, the inevitable happened: Warnow’s parents divorced. A few years later, Warnow wryly notes, “my father married the young woman who had once been practically his stepdaughter. As usual, he was ahead of his time.”

Woody Allen jokes aside, Scott really did seem to anticipate the future in uncanny ways. His quintet sat on stage and “mimed” soundless pieces years before John Cage premiered “4’33.”’ His “Soothing Sounds for Baby,” a three-volume set of repetitive electronic sounds designed to ease children to sleep, predates Philip Glass’s minimalist innovations. And in 1952, after building his daughter a theremin, Scott teamed up with Robert Moog, then a young graduate student at Columbia, to create the Clavivox, an early keyboard synthesizer and sequencer that offered vibrato, portamento and a variety of other effects. The keyboard synthesizer for which Moog became famous was unveiled in the 1960s, by which time Scott was almost completely consumed with work on a programmable polyphonic sequencer, the Electronium.

After divorcing his protégé and marrying a third wife, Scott retreated to Long Island to concentrate on electronic music full time. With “Hit Parade” having gone off the air in 1964, he focused on his long-term goal of creating a “Beethoven in a box” — a machine that, through randomly generating, modifying and combining sounds, could take the place of the composer. One of the most fascinating arguments to emerge from “Deconstructing Dad” is the idea that Scott’s obsessive work on the synthesizer and his unusual rehearsal technique back in the quintet days were actually motivated by the same impulse: To bring music from his mind directly into the world, undistorted by human error and emotion. CBS studio musicians were good, but the Electronium promised perfection.

Scott’s inventions didn’t earn him the kind of fame that Moog enjoyed, and they were never sold commercially, partly because Scott was a chronic tinkerer. The Electronium was an enormous, complicated work in progress, and Scott never paused long enough to market and sell what he’d already made. Still, a few innovators took note: A young Jim Henson enticed Scott to provide synthesized music for some early experimental films, and Motown head Berry Gordy hired him as head of the label’s electronic music and research and development team in 1971, but ultimately grew impatient with Scott’s method and laid him off six years later.

Scott’s music has enjoyed a resurgence since his death, with groups from the Kronos Quartet to Divo covering his pieces, and a dedicated handful of fans and scholars (Warnow calls them “the Raymond Scott brain trust”) studying his old recordings and schematics. But recognition for the Electronium remains elusive. Late in “Documenting Dad,” Warnow reads an unsent letter in which an elderly Scott expresses regret over having been so secretive about his inventions. After having spent a lifetime trying to stay out of the limelight, he suddenly craved it. In “Deconstructing Dad” Warnow bestows on his enigmatic father the lavish praise that Scott might have been too shy to accept at the height of his career. It’s a fine tribute.

Watch the trailer for ‘Deconstructing Dad’: