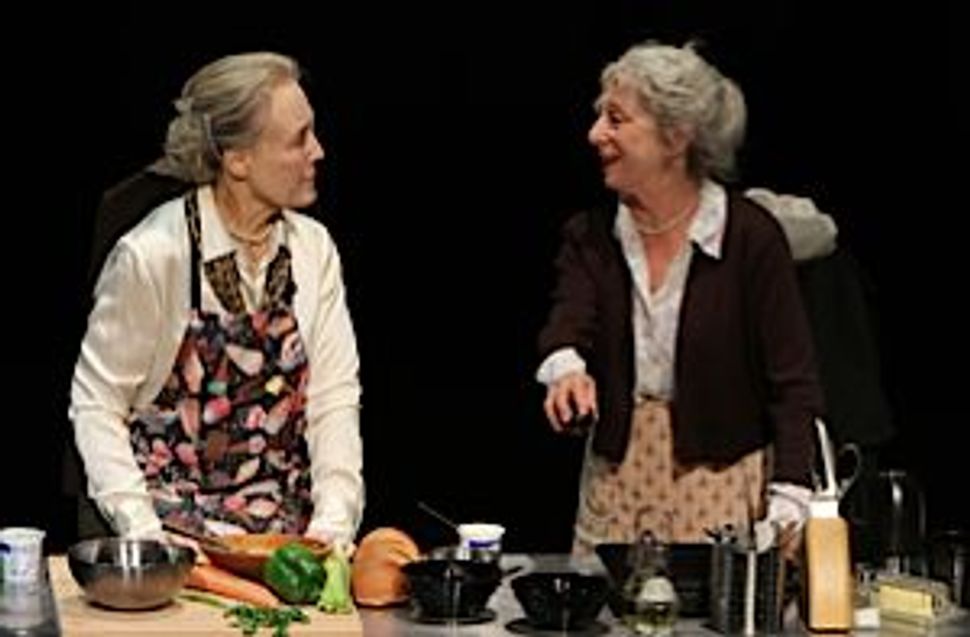 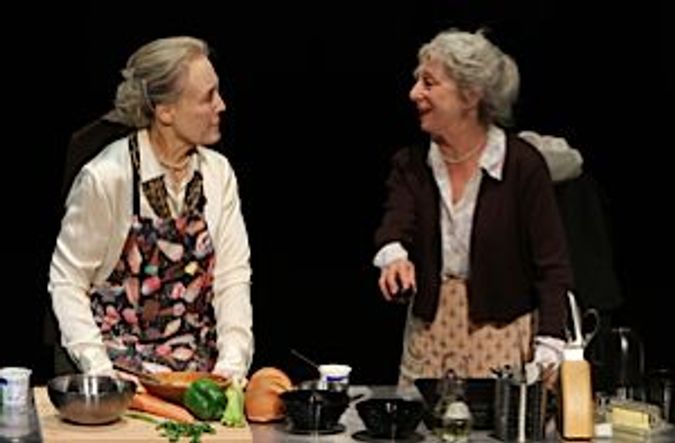 The U.S. premiere of “Oy” opens with a lengthy film montage that traces the Nazis’ rise to power, from the Weimar period to Hitler’s speeches. Like the film clips, Selma and Jenny’s return to Osnabrück reminds audiences about a fascism they might be unfamiliar with. Following the archival footage the sisters appear onstage in a kitchen set in their Paris apartment, where they prepare a meal while ruminating upon the past and the meaning of their German sojourn.

What ensues is the hottest kitchen debate since Khrushchev and Nixon faced off in 1959. Selma asks, “Should we say the things we shouldn’t say?” — and proceeds to do just that. During their wide ranging discourse the sisters hold forth on: The “normal” everyday anti-Semitism German Jews were accustomed to versus Nazism; Hitler (whom Jenny derides as an uncultured “dummy”); Jörg Haider (the prominent postwar Austrian rightwing politician); Chilean strongman Augusto Pinochet, and more. Selma laments that “the whole world is racist,” and even takes her fellow Jews to task for class snobbery, “looking down their noses” at Poles, and Jewish manufacturers in Vienna who, she claims, initially supported Hitler.

In an all too human touch, sibling rivalry persists, even in the Final Solution’s shadow. Ever the elder sister, Selma is bossy, scolding Jenny for petty things, but bewildered why, two thirds of a century after she escaped Nazism, she can’t stop herself from unconsciously slipping back into German.

This one-act play is well-directed by Frenchman Georges Bigot of Le Théâtre du Soleil. It’s rare for plays to feature elderly female lead roles and both Horn and O’Donnell fully inhabit their complex characters, grappling with the persistence of memory and the notion of pardoning one’s former would-be executioners. The playwright, born in Algeria in 1937, was stripped of her French citizenship by Vichy France’s anti-Jewish laws; Oy’s sisters are inspired by Cixous’ relatives.

Following the Saturday performance of Oy is a separate presentation of George Orwell’s 1984, adapted by the Actors’ Gang’s Artistic Director, Tim Robbins. Adolph and Big Brother in one night? It’s enough to make any theatergoer say,“Oy vey.”