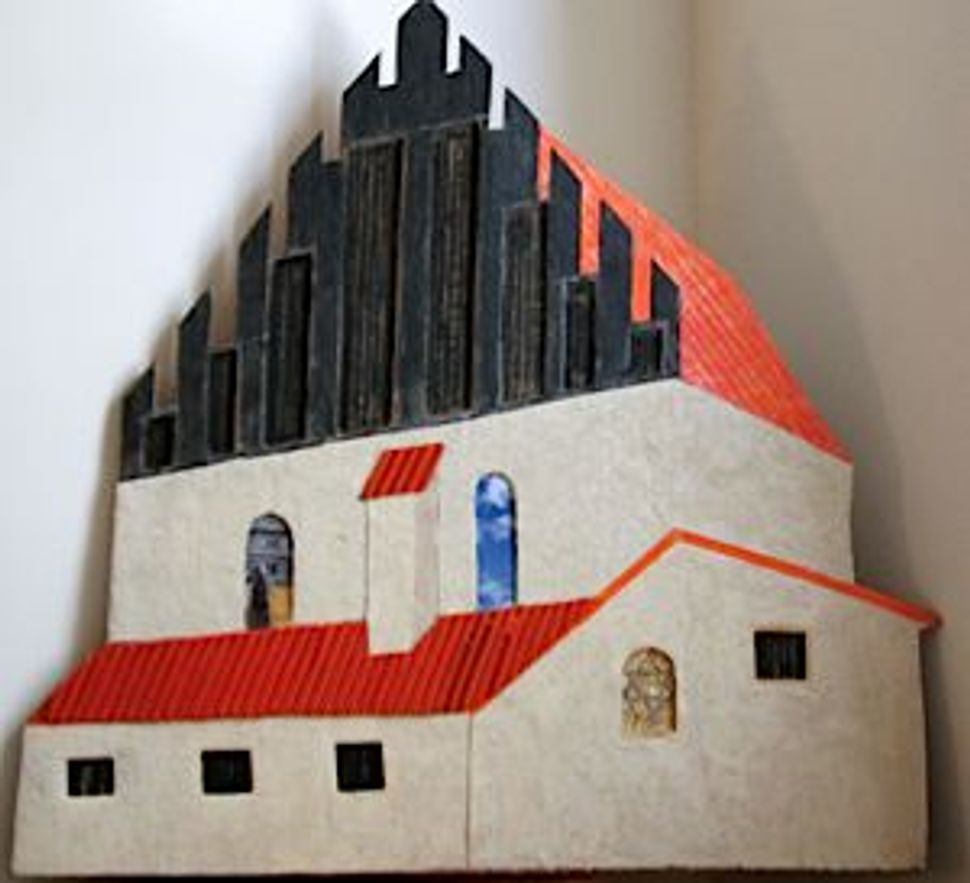 Asya Geisberg, a painter and Jew from St. Petersburg, has lived in the U.S. since 1977. She opened her eponymous gallery in 2010, favoring exhibitions that encompass the crossing of cultures. This summer’s group show, “Centaurs & Satyrs,” on view until August 17, is dedicated to the notion of hybridity. Mythological creatures with magical powers, centaurs and satyrs are fusions of man and horse, or man and goat. 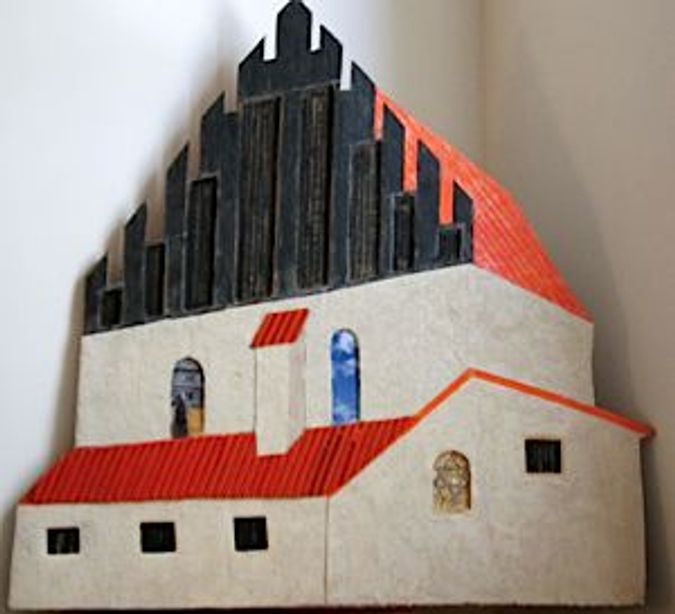 All of the seven artists featured in the show use combinations of materials to create composite images, and each separate material brings its own properties. For example, Naomi Safran-Hon, an Israeli artist living in the U.S., applies cement and lace to an inkjet photograph. The cement implies grittiness and heft, and when one thinks of its use in the construction of foundations and walls, its meaning develops. Attach some lace and the canvas develops further. Not only the textures of the materials but also their functions infiltrate the work.

In Safran-Hon’s artist’s statement, she states her concern with Middle Eastern politics. Her piece, “One Green Line,” is made of cement, thread and fabric enclosed in a wood frame. The title clues the viewer in to the concept. Looking at the chaotic knots of thread and fabric embedded in the concrete, one experiences the consequences of trying to separate populations by erecting borders, real or imaginary. The fact that the lines in the piece are threads that are not straight, and that do not divide but tangle in confusion, reflects the sense of mayhem that this particular separation has caused.

Irys Schenker, another artist featured in the exhibit, also used a variety of materials to construct her installation, “Traveling the Narrow Bridge.” The essence the artist wishes to express is also embodied in the texture and function of the materials she used. In this work, Schenker journeys to Eastern Europe, drawn to the destroyed Jewish communities of that region. In her artist statement she also expresses interest in examining the relationships people have to architectural and personal spaces. In her imaginings she places herself in Jewish communal spaces that no longer exist.

Schenker’s replicas of three Medieval synagogues are made out of corrugated cardboard, material that itself is recycled. She finds it outside of art galleries. Her concept is “to transform artwork wrappings into art.” And indeed, the shabbiness of the stock she uses is revitalized by the care she puts into decorating it. Using conté crayon, colored pencil and collage, she depicts the facades of the synagogues she has chosen on cardboard cutouts. These scrupulously executed pieces are then placed on long poles also made out of cardboard and embellished with paint and velvet ribbon. They look like proclamations to be carried in a processional or protest signs declaring the presence of the past in our present.

The work of all the artists in this show travels in the midst of construction. Chaos and fragility coalesce to transform disparate objects into works of art.