Running From the Reservation 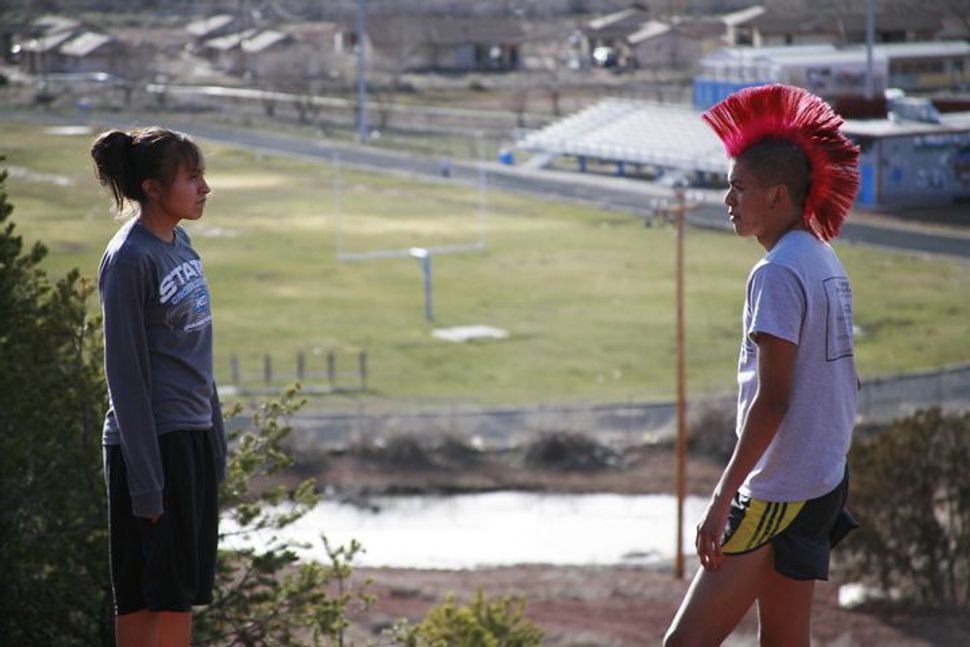 “Up Heartbreak Hill,” the POV documentary that premieres July 26 on PBS, is centered on two teenagers, Thomas Martinez and Tamara Hardy, who run like the wind. Not hurricane fast, but swiftly enough to place among the top finishers in state cross country and track meets; swiftly enough to attract the attention of college coaches.

The problem is that both youngsters are Navajo, residents on a reservation where the legend of the noble savage meets the reality of contemporary life. The film chronicles the two runners’ senior year in high school. 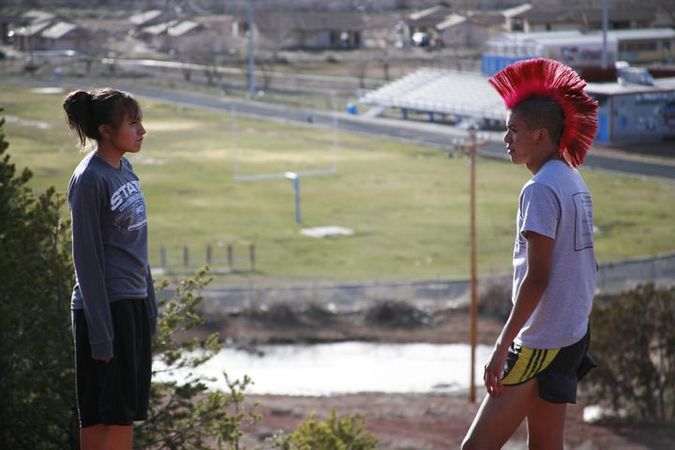 Thomas was brought up by an aunt and until recently neither his mother, who tried to put him up for adoption, nor his alcoholic father were part of his life. He spends much of his time trying unsuccessfully to reunite them.

Tamara comes from a more stable but almost suffocating environment. In addition to running, she is class president and has top notch academic skills. But her parents want her to attend a local community college rather than a school where she would live in a dorm — and perhaps never return to the res. “Getting off the reservation would really help me, but my mom and dad want me to stay home,” she says at one point. Later, after she is awarded a scholarship, she laments, “What’s keeping me here is my family… When I’m here I feel caged up.”

The film is wrenching and clearly the “Heartbreak Hill” of the title is not only the name of a hill the runners must conquer in a race, but also the emotional hurdles they face growing up. This is the first feature-length documentary for filmmaker Erica Scharf, 29. She talked to The Arty Semite about how difficult it was to stay objective and how her Jewish background helped her.

Curt Schleier: Why make a film about Native Americans for your first solo project?

Erica Scharf: It was something that really interested my dad. We used to go to the Museum of Natural History and see these dioramas that had representatives of different tribes in historical settings. And I was always interested in finding out about modern native culture.

Did you know much about Native Americans before you started this project?

I grew up in Oceanside, Long Island, and there was no Native American community there. There weren’t any native kids in my high school. And everything we learned about them was from a historical perspective — other than casinos. That was part of the impetus for the film. I didn’t have a notion about Native life today. I’d read about the alcoholism and social problems, but I guess I wanted to see for myself. Then I read an article about these kids who lived in the Navajo nation and were these great runners.

How did you find Tamara and Thomas?

I sent emails to the high school track coaches in the area and told them I was thinking about making a documentary and asking if any of their students would be interested in taking part. I wound up taking a scouting trip in 2008. I visited four or five communities, but I fell in love with these kids, the town [of Navajo, New Mexico] and the community. There was something magic, and that’s how the ball started rolling.

Did you see any similarities between Native and Jewish culture?

I think the cultures are pretty different. I can’t say that I found any obvious similarities.

Did anything from your own background help you in this project?

I think Judaism places a high premium on education and hard work and certainly those are values that I grew up with and that helped me persevere in what was a huge undertaking.

Given those values, was it difficult not to yell at the kids when it seemed like they were throwing away an opportunity?

Absolutely. That was one of the greatest challenges. Where do you draw the line between being a fly on the wall and caring about the subjects and stepping in? Certainly the line blurred. There were times I put down the camera and spoke to them about family and college stuff. But at the same time, you want to maintain the integrity of being objective. Filming is long since over, so now I’m more free to be a friend.

You shot the film in 2009. What took so long for it to be released?

I had 275 hours of footage, and getting a handle on all of that was time consuming. Then there was the process of submitting to POV. There is also a feature-length version of the film available on DVD. It features a third person, Gabby. She is not a runner, but an aspiring photographer and artist.

Up Heartbreak Hill airs on most PBS stations nationally on July 26; it airs July 29 in New York. It is also streaming on POV’s website through August 26.

Watch the trailer for ‘Up Heartbreak Hill’:

Running From the Reservation