Jerry Seinfeld’s New Show About Nothing 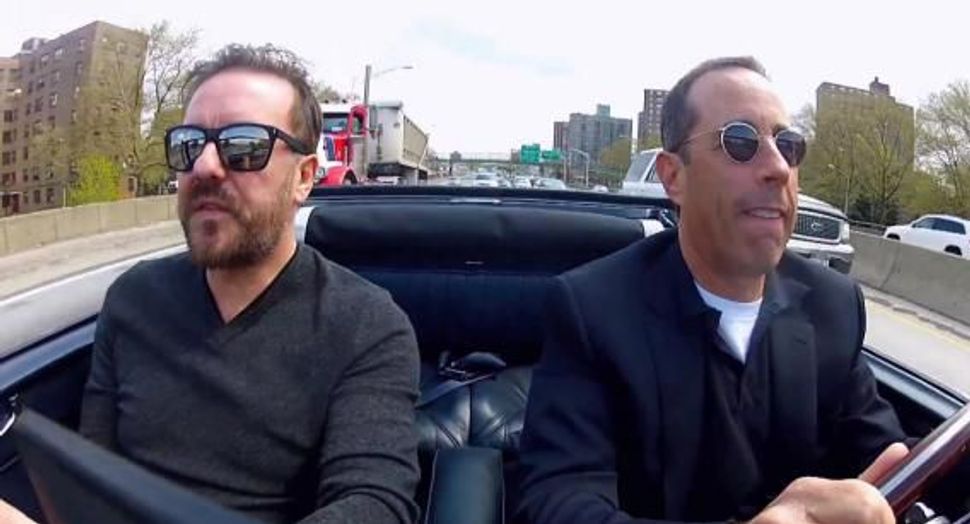 Jerry Seinfeld, a famous comedian, used to be the star of “Seinfeld,” a sitcom about a comedian named Jerry Seinfeld and his friends. Larry David, a less-famous comedian, was a writer and co-creator of “Seinfeld,” and now stars as Larry David in “Curb Your Enthusiasm,” a show about the daily life of Larry David, co-creator of “Seinfeld.” In the fourth season of “Seinfeld,” Jerry Seinfeld and his best friend George Costanza create a TV show called “Jerry,” a sitcom about a comedian, his friends, and a guy sentenced by a judge to be the comedian’s butler. In the seventh season of “Curb Your Enthusiasm,” Larry agrees to participate in a “Seinfeld” reunion in the hopes that doing so will lead to a reconciliation with his wife. Jerry Seinfeld guest-starred as “Jerry Seinfeld,” the actor who played “Jerry Seinfeld” on “Seinfeld.” He is meaner and nastier than the character — meaner and nastier even than Larry — though no one seems willing to acknowledge this, or in any way recognize that Jerry is not the same person as his character. 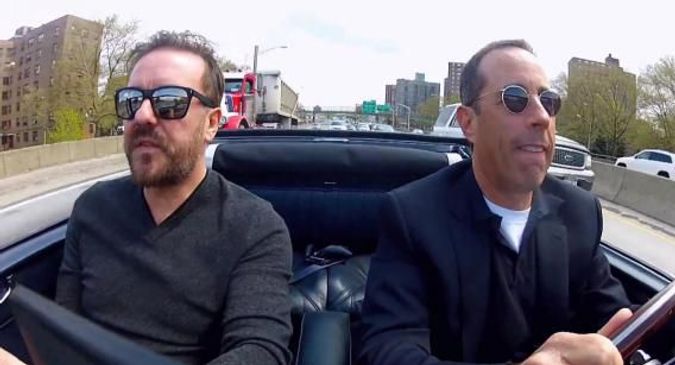 All of this subtext plays an important role in the first episode of comedian Jerry Seinfeld’s new web series, “Comedians in Cars Getting Coffee.” It is among the most accurately titled shows in the history of shows — or is at least intended to be. Larry’s refusal to drink coffee is an important “plot point” in the episode, and, according to Larry, a key factor in the dissolution of his marriage. You would be forgiven for mistaking this banter for dialogue from “Seinfeld” or “Curb Your Enthusiasm.”

But the intent is to give you exactly what the title promises. In the pilot, Jerry Seinfeld drives a blue 1952 VW Bug, meets his friend Larry, and the two journey across town to drink coffee and eat pancakes. Later episodes only change the car, the comedian and the coffee shop. So long as we continue to make cars and continue to birth comedians, the formula is endlessly repeatable.

I’m not being hyperbolic when I say that “Comedians in Cars Getting Coffee” is an important development in the history of broadcasting. Though it appears completely insignificant, Seinfeld’s new show breaks down the border between sitcom and talk show, and finally fulfills “Seinfeld”’s promise of being “a show about nothing.” Or, as Larry tells Jerry at the end of the episode, “You have finally done the show about nothing.”

“Seinfeld” broke the mold of ‘80s sitcoms that were really about something (viz: “ALF,” a show about a family and the furry alien that lives with them; “Small Wonder,” a show about a family and their robot “daughter,” both of which ended right as “Seinfeld” began), but it was still theoretically about a comedian finding material for his act. This was especially clear in the early seasons, which featured stand-up segments topically related to the main themes of the episode. (This is still a good premise. See, “Louie,” the FX sitcom about the personal and professional life of comedian Louis C.K.) “Seinfeld” would even occasionally incorporate these stand-up segments into the episode’s narrative.

No more. “Comedians in Cars Getting Coffee” is not a sitcom: there is no need for plot, for character growth, for situations designed to be funny. It’s a talk show without the contrivances of the talk show: no one is there to promote anything, no one tells stories designed to score well with an audience, which they will tell again the next night on another network. The episodes also aren’t the same as the vignettes in Jim Jarmusch’s “Coffee and Cigarettes” (2003), which featured miniature stories, and “plots” that turned on the confusion of identity. “Comedians in Cars Getting Coffee” is just two comedians talking and enjoying the other’s presence, with all the awkwardness that entails.

The strange newness of this became clear to me in the middle of the pilot episode, when Jerry and Larry discussed Larry’s lunch habits. Larry explains that he typically eats a salad and a protein shake for lunch.

Jerry: Where do you get that?
Larry [Puzzled, fidgeting]: In a…store.
Jerry [Calm, satisfied]: Yea.
Larry [Cracking up, big grin; Jerry smiles]: The answer was equally as stupid as the question.
[Cut to shot of the car driving.]

Since there is nothing funnier than dissecting comedy, here are two thoughts: First, Jerry’s question is idiotic, but it’s also totally rational by talk-show standards. This is precisely the type of idiotic question that leads to the recital of a rehearsed story (“I’ll tell you, one time…”), that allows the guest to offer up a safe amount of their private life to the public. Larry refuses to fall into the trap, and instead calls his friend out.

Second, and more important, Jerry and Larry made careers out of obsessing about just such observations. The minutiae of buying a protein shake, and all the human tragedy exposed on a journey to buy a protein shake, would animate a good 10 minutes of Jerry’s stand-up routine, or an episode of “Seinfeld,” or a multi-season arc of “Curb Your Enthusiasm.” We can imagine Larry fuming over the order in which his ingredients were added to the blender (“NO! The powder goes in before the milk”), or the ridiculous names of drinks at places like Jamba Juice (“What is this Razz a-matazzing?”). Instead, we get nothing. They let the topic go and fall away. This is the comedy of friends.

Later episodes point out the artificiality of the show’s structure. In the second episode, Jerry and a terrified Ricky Gervais (introduced by Jerry as, a “funny, silly, English comedian guy”) drive around New York in a classic English sports car. Ricky pointedly tells Jerry that if he wasn’t as successful as he was, Jerry would seem like a maniac. “This is what mad people do — drive and giggle at people’s fear.”

Then there is the third episode, starring Brian Regan. Regan’s a (very) successful stand-up, and someone that Jerry clearly knows and likes, but he’s not a household name, and he and Jerry clearly don’t regularly hang out together. It feels like a booking on a TV show. This isn’t bad — the show is still funny — but you do remember that you are watching people unnaturally brought together. I’m also willing to admit that this also improves the humor in a strange way: When Jerry and Brian connect over coffee, when Brian riffs on Jerry’s nonchalant nihilism (“all human endeavor is killing time, all of it”), we realize that we are watching a special moment of togetherness.

“Comedians in Cars Getting Coffee” is precisely about all those things, yes, but we could switch the title’s nouns and verbs mad-lib style and still have an excellent show. “Philosophers in Rock Quarries Drinking Tea,” and “Rabbis in Space Davening Mincha” would be equally captivating to watch. If there’s a broader point to be abstracted from the show, it’s this: being intensely about something (taking care to describe the car and its features; luxuriating in the cinematographic pleasure of watching coffee brewing, milk steaming, filters filtering) is the purest way of being about nothing. Seinfeld’s new series works not because of anything unique in its components, but because of what it tells us about humanity, that at the core we just love talking to someone else.

Watch a promo for ‘Comedians in Cars Getting Coffee’:

Jerry Seinfeld’s New Show About Nothing