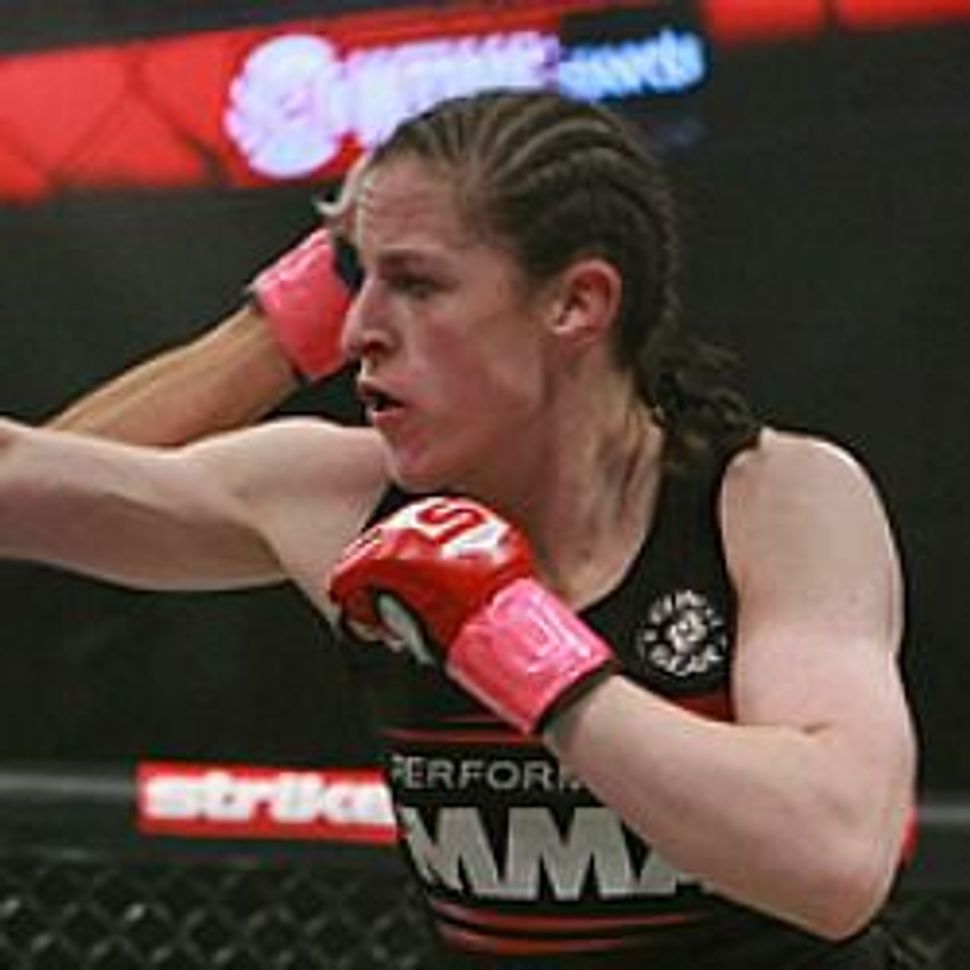 Jewish boxing fans haven’t exactly been starved for the heirs to Benny Leonard and Barney Ross.

From Zab Judah’s reigns as welterweight and light welterweight champion to Yuri Foreman’s championship success in the light middleweight division, Jewish boxers have risen to prominence again in recent years. However, as mixed martial arts and the UFC supplant boxing as the combat sport of choice – at least in the U.S. – prominent Jewish names are harder to find.

On Saturday night, though, one will be in the spotlight: Sarah Kaufman.

Kaufman, a 26-year-old native of Victoria, British Columbia, will challenge for the Strikeforce Women’s Bantamweight Championship on Saturday night, when she meets Ronda Rousey for the title at the Valley View Casino Center in San Diego, with the fight being broadcast live on Showtime (10 p.m. ET).

The UFC doesn’t currently have a women’s division, making Strikeforce (owned by the UFC’s parent company, Zuffa) the top promotion in the world for women’s MMA. Kaufman was the inaugural champion at 135 pounds, winning the title in February 2010 and defending it once before losing to Marloes Coenen some eight months later, and after a three-fight win streak, she’s ready to reclaim the belt.

“It’s been a great training camp with my team,” Kaufman said, “and I’m looking forward to seeing what Ronda brings into the cage.”

The former champ will have a tough road to get her belt back, however. Rousey, a 2008 Olympic bronze medalist in judo, has gone 5-0 in her pro MMA career, forcing all five of her opponents to submit to an arm-bar in the first round. An arm-bar is responsible for the lone blemish on Kaufman’s professional record, as Coenen successfully applied the hold to end her reign as champion. As a result, Kaufman has to be particularly wary, given that the arm-bar is Rousey’s bread and butter.

“Coming into a fight, you have to know that Ronda could go for the arm-bar to keep her streak alive,” Kaufman said. “She could mix it up, go for something different. You can’t focus too much on that one thing, but definitely making sure that you’re doing the ample amount of repetitions in the proper defense, making sure that you’re getting out of good situations and bad situtations, and putting yourself in uncomfortable spots in training, so hopefully you don’t get there in fighting.”

Meanwhile, Kaufman will be looking to keep the fight standing, as her 15-1 record includes 10 wins by knockout. That would make her more than suitable as an heiress to Leonard (70 KOs in 90 wins) and Ross (22 KOs in 72 wins), although Kaufman herself doesn’t see it that way.

“I wasn’t raised Jewish,” Kaufman said. “My dad is Jewish, so I’m technically not part of that culture. I can respect a lot of the things that they stand for, but I don’t live my life in that sense, so I don’t want to give off the feeling that I do.”

Still, if Kaufman is successful on Saturday night in San Diego, a fighter of Jewish descent will reign atop women’s mixed martial arts. Perhaps that would be enough to make Leonard and Ross proud.