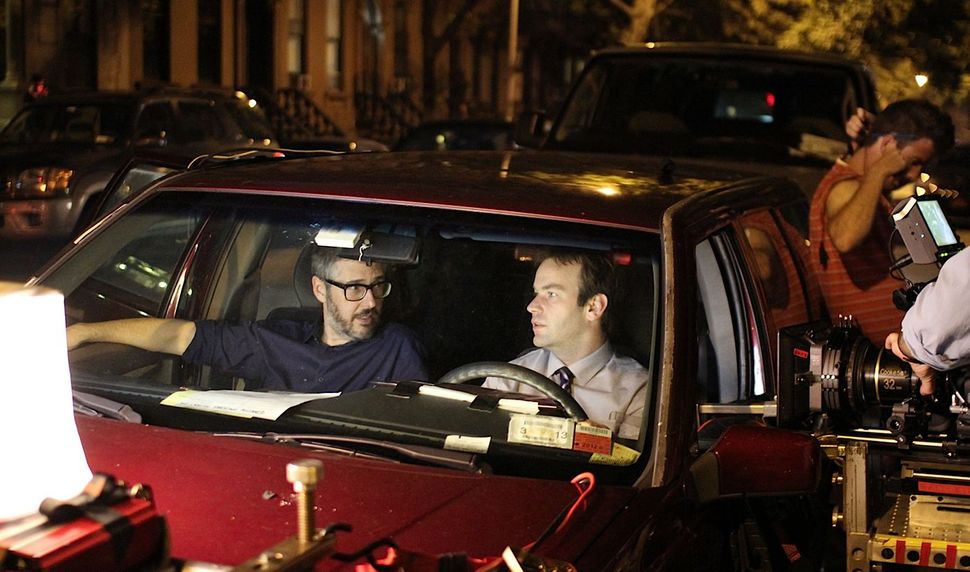 Ira Glass and Mike Birbiglia on the set of ?Sleepwalk With Me.? Image by Kim Madalinski 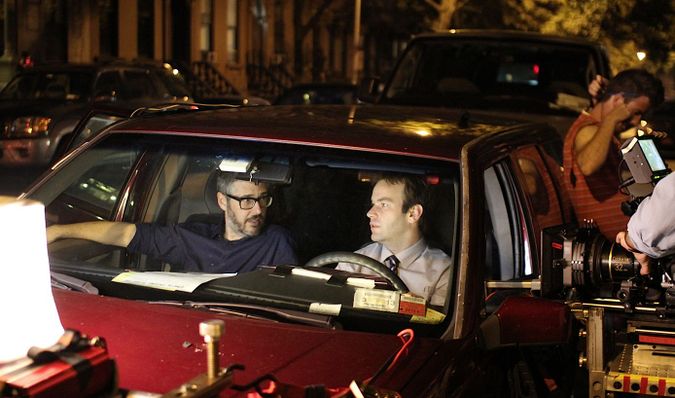 Ira Glass and Mike Birbiglia on the set of ?Sleepwalk With Me.? Image by Kim Madalinski

Glass, of course, is the host of Chicago Public Radio’s popular program This American Life. More recently, he’s taken on the duties of screenwriter and producer of “Sleepwalk With Me,” a film that opens in New York August 24, Los Angeles the following week and rolls out nationally in September.

“Sleepwalk With Me” is based on the life of standup comedian Mike Birbiglia, a successful performer who, as a result of pressure from his girlfriend (about marriage) and parents (about his career), developed a sleepwalking disorder. One night he even jumped out of a closed window on the second story of a motel. Birbiglia turned the experience into a successful routine, an off-Broadway play and a book. Glass heard portions of the play, did a version of it on his radio show and has now produced it as a film. Glass spoke to The Arty Semite about his Jewish background, his radio show and the film:

Curt Schleier: For people unfamiliar with the show, what is the elevator pitch for This American Life?

Ira Glass: It’s always been a little hard to describe. The closest I’ve come is that it is true stories that unfold like little movies for radio. They have emotional and funny moments, and when you listen to them you get caught up in the plot because you want to see what’s going to happen next. It’s journalism, but journalism that draws you in. It has to have an amazing and surprising plot and it also has to drive at some idea about the world that seems interesting and new. And then I like stories that are funny and lead to something more emotional.

What attracted you to Birbiglia?

He’s enormously funny and his take is brave and consequential. He’s also made a really interesting transition from standup. He wrote, directed and stars in the film; it’s like watching a young Woody Allen. And it’s a great film story, one you can easily sympathize with and relate to. It lays out naturally in three acts and has great sleepwalking sequences.

Has your show ever been turned into a film before?

We had one story that was made into a film, by Warner Bros. It was “Unaccompanied Minors” (2006) directed by Paul Feig. But I wasn’t very involved in that.

Can you talk a little about your background growing up?

I grew up in the Baltimore suburbs, and attended a Conservative congregation. The rabbi was Seymour Essrog, who apparently was a big macher in the Conservative movement. My father was an accountant. Wait, if you write that he’ll kill me. He was a CPA. My mother was a psychologist and researcher, an expert on extramarital affairs. She wrote a book about that. In terms of my Jewishness, I was raised going to Hebrew school and continued to go even though I’d already decided I didn’t believe in God and an now pretty much a non-practicing, non-believing, cultural Jew.

What made you decide there was no God?

It wasn’t one thing. It was just something I found myself on the other side of. It’s like falling in love. You simply find you are or you aren’t. I didn’t need God to explain the world. The world made more sense to me without God in it. The notion that there is a big supernatural daddy in the sky pushing the hcess pieces around came to seem unrealistic to me.

Did you always want to be in radio?

I was the sort of kid who actually had plans when I was very little. Like everybody in the 1960s, I wanted to be an astronaut, but I was so un-athletic it became clear to me it wasn’t going to happen. Since I was a nice Jewish boy with good grades my parents’ plan for me was to be a lawyer or a doctor, so they were very much against me going into public broadcasting. I used to joke — but I stopped because my parents said it hurt their feelings — that they were the only Jews in America who didn’t listen to public radio.

How did you get involved in radio?

I stumbled into it. I got into public radio in the late ‘70s when I was looking for a summer job. I talked my way into an internship. I didn’t want to go into radio. I just wanted to do something that seemed like it would be interesting. That was my entire goal.

Has the experience of making a film taught you anything?

If anything, producing a movie has shown me how much harder it is to do than what I do. It took two-and-a-half years to get funding to make even this small movie. I think if people who made movies had an idea of what an incredible deal we have in public radio, what a cushy situation it is, we would have a lot more competition.

Watch the trailer for ‘Sleepwalk With Me.’