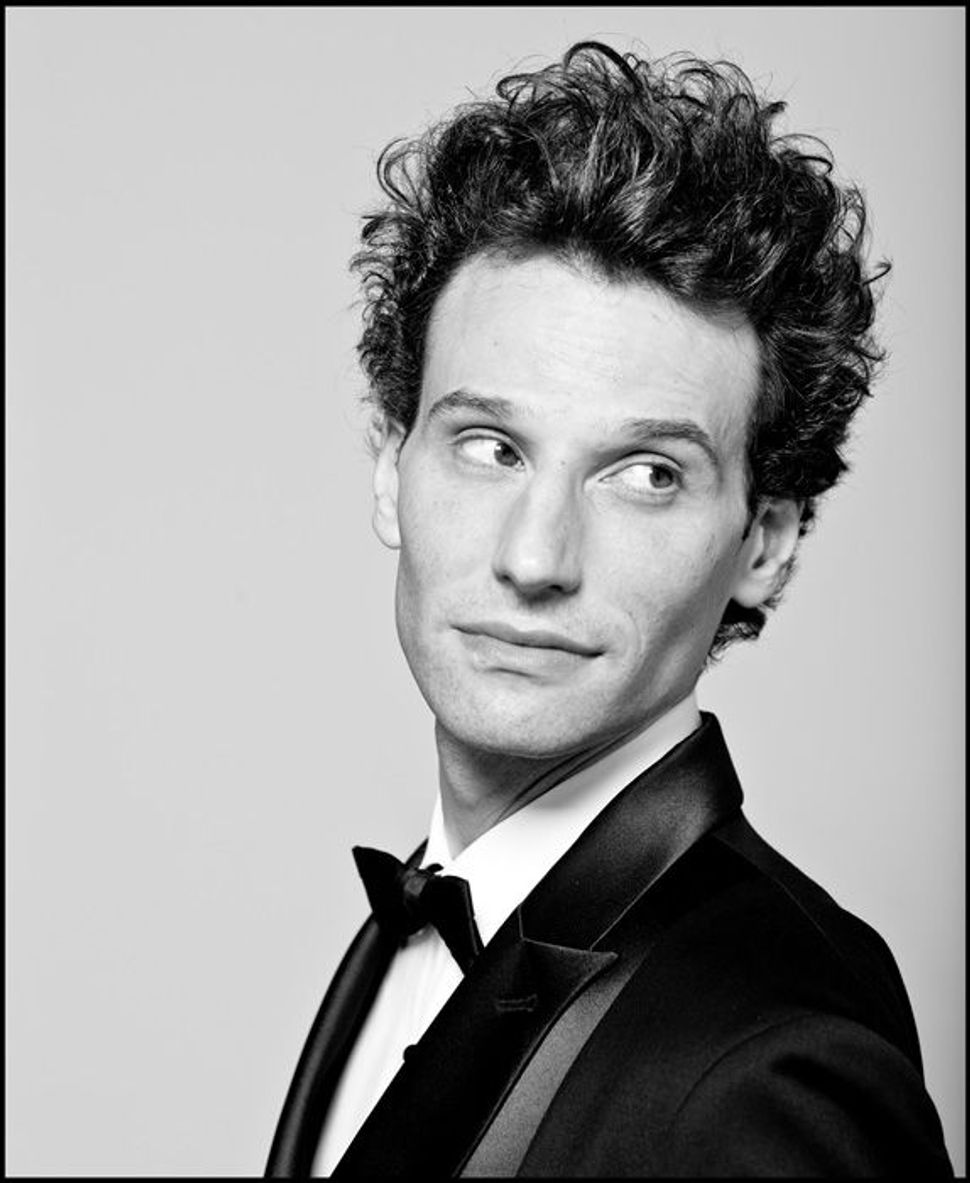 What I experienced was interesting and problematic in equal measure. There is no question that Greilsammer is a serious and capable musician, and his desire to draw connections through extremely diverse composers is laudable. But his distortion of these composers’ works gives me pause.

In his brief introduction Greilsammer explained that he would play the entire program without pauses between works, and that the first and last were by living composers. He then went on to recount how “frankly annoying” the composer’s reaction to the first piece on the program had been (Helmut Lachenmann’s “Wiegenmusik,” or “Cradle-Music”), when Greilsammer played it for him. Not knowing the Lachenmann work, I can’t vouch for how true to the composer’s intentions his interpretation is. But I’m familiar with all the others on Greilsammer’s program, except for the U.S. premiere that ended the program.

The Mozart Rondo in A Minor, which followed the Lachenmann piece, used to be one of Alfred Brendel’s most heart-rending encores. Here it was played almost entirely with the una corda pedal down, so the hammers only hit a single string instead of three, in a vain attempt, perhaps, to sound like an early piano. The resulting tone bled the work of its amazing richness of color.

The piece was further debilitated by Greilsammer’s disruptive phrasing and inauthentic changes of speed, as if Wolfgang were having the vapors, or, alternately, hot flashes. Mozart himself made fun of pianists who did such things. The piece was followed by Couperin’s popular “Les Baricades Mystérieuses,” which can succumb to such practices without breaking apart. So it was an unusual, but not improper treatment.

Greilsammer’s performance of the late Hungarian master György Ligeti’s early “Musica Ricercata #7” (not #8 as listed in the program), so distorted the work’s intent and the express instructions the composer wrote in the score that I wanted to shout, “No!” Ligeti, who was Jewish, and who, with his mother, was among the only members of his immediate family to survive the holocaust, made use of the melody of this piece at least three times in his career — none more heartbreakingly than in his late Violin Concerto, which is about loss, memory and forgetting. The concerto is almost entirely half-remembered near-repetitions of the melody, changed in some way each time.

This solo piano work, composed more than 40 years before the concerto, is an entirely different matter. The lyrical, folkish melody floats over of a halo of quickly and quietly iterated notes of an unchanging harmony — like a memory of beauty, recalled in nostalgia. Greilsammer’s interpretation was as if it were a badly received shortwave broadcast, now in focus, now disappearing in static, like a mind unsure of itself. This retroactively re-interprets the piano solo in the Alzheimer’s-like mindset of the concerto. Playing fast and loose with the score like this is deeply problematic, dishonest in the most profound sense. But, yes, it can yield interesting results.

The Schubert Impromptu No. 3 in G-flat major continued in the same manner. But Schubert’s deliberately wayward music is far more accepting of a variety of idiosyncratic approaches. The work that was performed in the program with least distortion was Morton Feldman’s uncharacteristically brief “Piano Piece,” from 1964. Greilsammer’s tentative touch and wayward inclinations suited Feldman’s delicate, silence-infused, pared-down alternations of metrical and non-metrical where-are-we-and-where-are-we-going music. It was also an honest delight to hear Greilsammer emerge into Feldman without a break from Schubert, as the composer himself always wanted to be known as the American Schubert.

Johann Jakob Froberger’s deeply strange “Tombeau de M. Blancrocher” was another willful gearshift. The M. Blancrocher of the title had died falling down a staircase, so this 17th-century piece, originally written for harpsichord, has lots of step-wise motions (and a run down the keyboard at the end). In Greilsammer’s hands, M. Blancrocher, being so unsteady on the steps from the get-go, was a goner from the beginning. Greilsammer’s rendition of the c-minor Fantasia of Mozart then revisited the same problematic interpretive decisions as the earlier Rondo.

The finale, however, was something else. Israeli pianist and composer Matan Porat composed his effective “Whaam!” in 2009. It is a two-part work, somewhat like a modern update of the Hungarian lassu-friss (slow-fast) pieces of Liszt. Porat’s “lassu” introduction was made up of dreamy arpeggiated chords cribbed from Olivier Messiaen’s works. The second, “friss” half, would have echoed the Ligeti Musica Ricercata #8 had it been played, as Porat’s work would have shared its wild and minimalist Bartókian percussive release.

But Porat also balanced his Bartók inspiration with half-rock, and rhythmic gestures of fist and elbow banging (à la Henry Cowell or Lou Harrison) against a left-hand octave beat, albeit with more restrained harmonic implications than Ligeti’s or Bartók’s. Greilsammer concluded the work and the recital by abruptly knocking the piano bench over as he leapt backwards several feet from the keyboard.

Porat’s score, unlike most of the program, was likely performed as the composer intended. If the rest of works had been performed as honestly, I’d be writing a different review. But Greilsammer performed almost everything as if he needed to force what the audience should think, and falsified the music for this purpose, rather than letting it have its own voice.

Finding connections through disparate composers’ works can be enlightening, and even at times startling, but only if it respects the particular genius of each work. I hope Greilsammer will grow out of this desire to mug the music he obviously loves, and develop his substantial talent and intellect to serve the composers more truthfully. Or else, restrict himself to composers whose works he is already temperamentally attuned with. Otherwise, like this concert, he will be both interesting and problematic at the same time.